Chase Anderson threw 6 innings, allowing 2 hits and 1 run, striking out 5 Oakland batters. But the Brewers bullpen had another meltdown and dropped the 5-3 game late.

Xander Bogaerts collected 4 hits, including 2 homers, driving in 3, but the Red Sox pitching could not contain the Rays, who won 9-4.

Michael Pineda held the Marlins to 1 run in 6 innings, striking out 3. The Twins bullpen had a meltdown that blew the lead in the 9th and lost the 5-4 game in the 12th.

Hunter Renfroe homered and walked in the Padres 8-2 loss in Los Angeles.

END_OF_DOCUMENT_TOKEN_TO_BE_REPLACED

Dansby Swanson doubled and then in the comeback rally hit a key 8th inning homer to propel the Braves past Pittsburgh, 5-3.

Masahiro Tanaka allowed 1 run over 7 innings and worked out of some tight jams to earn the 2-1 decision for the Yankees over Detroit.

Brett Phillips homered, walked, doubled, stole a bag and was on base when the Royals walked off against the Orioles with a homer to a 5-4 final.

They all owned baseball on September 1, 2018

END_OF_DOCUMENT_TOKEN_TO_BE_REPLACED

Matt Carpenter hit a record 4 doubles while driving in 2 and scoring 2 as the Cardinals clobbered the Rockies, 12-3.

Blake Snell struck out 8 in 6 innings, allowing 2 hits and 1 run to help the Rays be the first team to sweep Boston this year with a 9-1 thumping.

END_OF_DOCUMENT_TOKEN_TO_BE_REPLACED

Denard Span reached base 4 times, homered, scored twice and drove in 3 to help the Mariners win a critical 8-6 game in Houston.

Hunter Renfroe hit a dramatic, come from behind 9th inning grand slam to spark the Padres 8-4 shocking of the Brewers.

END_OF_DOCUMENT_TOKEN_TO_BE_REPLACED

Patrick Corbin pitched shutout ball into the 8th, finishing with 7 1/3 scoreless innings, 4 hits and 9 strikeouts as the Diamondbacks blanked the Phillies, 6-0.

Brandon Nimmo hit 3 doubles, driving in 3 and scoring 3 in the Mets 8-0 shutout of Cincinnati.

Joey Gallo homered twice and added a single to help the Rangers take an 11-7 slugfest from Seattle.

END_OF_DOCUMENT_TOKEN_TO_BE_REPLACED 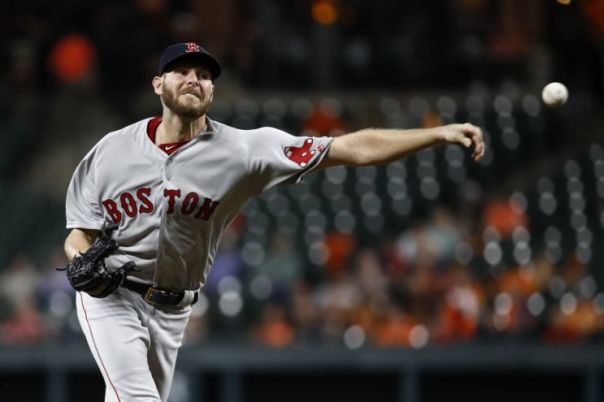 Chris Sale became the first AL pitcher since 1999 to pass 300 strikeouts for a season and did so by whiffing 13 Baltimore batters over 8 shutout frames for the 9-0 Boston victory.

Whit Merrifield went 3 for 5 with a homer and 2 RBI as the Royals clobbered Toronto, 15-5.

Gio Gonzalez threw 7 innings, allowing 2 runs and striking out 8 Braves to earn the 7-3 decision for the Nationals.

Adam Frazier got a pair of hits including a walk off 2 run homer to lead the Pirates past Milwaukee, 6-4.

END_OF_DOCUMENT_TOKEN_TO_BE_REPLACED

Hunter Renfroe got on base 3 times and drove in 4, the last 2 in a walk off 2 run shot in extra innings that gave San Diego a come from behind 6-5 final over Milwaukee.

Lonnie Chisenhall got on base 3 times, homered and drove in 3 for Cleveland as they topped Tampa Bay, 8-7.

Zack Godley allowed 1 hit and struck out 7 Mets in 6 2/3 innings. He did not get a decision but Arizona’s bats unloaded on the Mets defense and won 7-3.

Jesse Chavez pitched 7 strong innings, allowing 3 runs and got a win for the Angels over the White Sox, 5-3.

END_OF_DOCUMENT_TOKEN_TO_BE_REPLACED

Miguel Cabrera led the Detroit attack by reaching base 4 times, homering and driving in 5 in the 12-0 final over Cleveland.

Hunter Renfroe homered twice, driving in 7 as the Padres clubbed the Dodgers, 7-1.

END_OF_DOCUMENT_TOKEN_TO_BE_REPLACED

Below you can find my analysis for the prospects ranked between 51-60 for the 2016 midseason top prospect list. If you want to see the full top 100 list, please visit the following link: SEE THE TOP 100 PROSPECT RANKINGS. I will be posting daily analysis of every player listed in the top 100, so please follow my blog and other social media for updates.

51. Jake Bauers (TB, 20 Years Old, 1B): Bauers has improved his game a lot in 2016. Last season, he hit .272, with 11 home runs, eight stolen bases, .342 OBP, and a .418 slugging percentage in 534 plate appearances. In only 368 plate appearances this season at Double-A, Bauers is batting .285, with 10 home runs, seven stolen bases, .373 OBP, and a .430 slugging percentage. He also has very advanced plate discipline, which should serve him well in his career. Bauers has one of the prettiest left-handed swings you will see, so it is no surprise that he is hitting so well this year.

The Padres Should Definitely Not Pursue Yoenis Cespedes: But The Angels Should

Yoenis Cespedes led all LF for HRs with 35 on the campaign in 2015. He picked a contract year for his best season to date out of the 4 years he has been in the Major Leagues. Cespedes hit 17 HRs with the Mets in 2 months, after smacking out just 18 in the first four months with Detroit. Cespedes finished in the top 40 for both leagues in respective big fly’s, and was tie for 13th overall with Manny Machado and David Ortiz. The 30 Year Old would not be a good fit in San Diego – where they have a similar player in Matt Kemp already. His presence with Trout and Calhoun in Los Angeles would be the best all around Outfield in the Majors should he sign there.

With Yoenis Cespedes still on the open market a lot of speculation is running rampant on which squads should be in the running for his services.

While I am not sure I buy the theory at all, the Padres have been said to be checking in on the big Cuban star.

This type of signing would be a monumental mistake in my view.

I would hope that A.J. Preller would have learned his lesson by acquiring high strikeout, low OBP players that have power that may not translate to their home park in Petco Park. END_OF_DOCUMENT_TOKEN_TO_BE_REPLACED

Comments Off on The Padres Should Definitely Not Pursue Yoenis Cespedes: But The Angels Should

Kris Bryant is about as sure of a prospect there has been in the last 5 years. Will the Cubs let him start the year in 2015, or will they send him down until the end of April to save service time. All you need to know about the franchises desire to win it all this campaign may be based on this decision. The young slugger had 40 HRs in the Minor League’s last year.

These are my top 100 prospects in baseball. There is a lot of talent in the minor leagues right now across almost all levels. Yoan Moncada signed after I wrote this but he would slot in the 8th slot right ahead of Joey Gallo and I do believe Moncada will be a stud.

1. Kris Bryant 3B CHC – He will hit for power and hit for a high average at what is an underrated position. He was the 2nd overall pick in 2013 and has the looks of a perennial all star.

2. Carlos Correa SS Hou- He was having a very nice season at the best hitters park in the minors in Lancaster before he broke his leg. I think he can stay at SS with almost all five tools with power rapidly emerging. He’s the future face of the Astros.

3. Corey Seager SS LAD- There are people who think he may get too big for SS and have to transfer to 3B but I think he has much more value at SS and can stick there for at least a few years. He should have an elite bat with plus plus power. Possibly the next Troy Tulowitzki with a slightly worse glove.

END_OF_DOCUMENT_TOKEN_TO_BE_REPLACED

The Texas Rangers possess 5 of the players we have in our 51 – 100 prospects. If this team is serious about getting younger even more with trades of Alex Rios or Adrian Beltre, perhaps they can add even more to the list In a year where they have had 20+ DL stints, maybe some of these young guys will find themselves in Arlington sooner – rather than later.

To qualify for rookie status, a player must not have exceeded 130 at-bats or 50 innings pitched in the Major Leagues, or accumulated more than 45 days on the active roster of a Major League club or clubs during the 25-player limit period, excluding time on the disabled list or in military service.

This list doesn’t include players in the 2014 Draft nor the 2014 international signing period.

END_OF_DOCUMENT_TOKEN_TO_BE_REPLACED

Before I start I just want to say that baseball is a very tough game so when I say he can be a all star or that he can have a curveball that is just unhittable – it may not happen……. and actually is very doubtful to fully reach the ceiling. END_OF_DOCUMENT_TOKEN_TO_BE_REPLACED

Five Players The Mariners Could Target In The Upcoming MLB Draft

D.J. Peterson, a potential Mariners first round selection, is hitting .410 with 18 HR for the University of New Mexico.

With the #12 pick in the 2013 MLB Amateur Draft, the Seattle Mariners will have numerous future superstars to choose from.

Whether they decide to go the route of a talented but raw high school athlete or a tested and experienced college player, General Manager Jack Zdurencik will be making a decision that could save his job. J.P. Crawford and Austin Meadows are two very athletic high school players that the Mariners could target.

Or, they could choose to go the route of D.J. Peterson, Hunter Renfroe, or Ryne Stanek, three experienced college players. No matter what route they decide to take, this pick is going to be extremely important for the future of the Seattle Mariners.