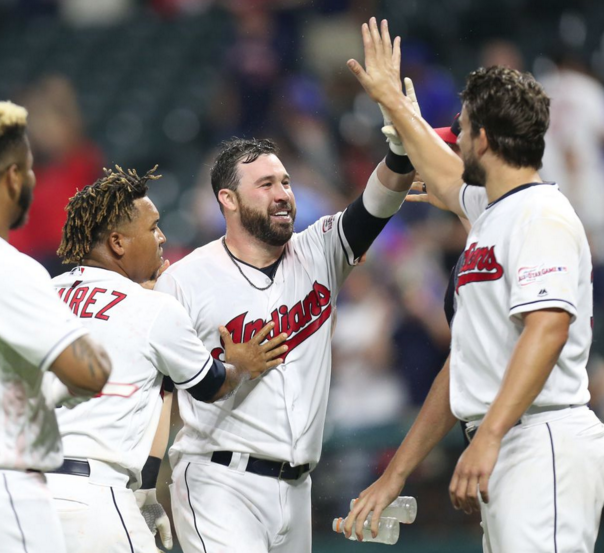 Jason Kipnis collected 3 hits including a walk off homer in the 10th to give the Indians a 3-2 final over Kansas City.

CC Sabathia struck out 9 Blue Jays in 6 innings as the Yankees hung on to win 10-8.

Jean Segura went 4 for 6, with a double and a homer, driving in 2 and scoring 2 to give the struggling Phillies a much needed 13-7 victory over the Mets.

Michael Conforto reached base 4 times, including a double and a homer. But the reeling Mets lost to Philadelphia, 13-7.

Yoán Moncada homered, singled and walked, scoring 2 and driving in 2, but the Red Sox walked off against the White Sox, 6-5.

Drew Pomeranz struck out an eye popping 11 Rockies in just 5 innings, allowing 5 hits and 2 runs. He would be saddled on the short end of a 2-0 decision for San Francisco.

Sean Reid-Foley slowed down the Yankee bats with 2 scoreless innings out of the bullpen, giving Toronto a chance to comeback. The Blue Jays rally fell short as they fell, 10-8.

END_OF_DOCUMENT_TOKEN_TO_BE_REPLACED

Noah Syndergaard went the distance, striking out 11 Mets and earned the complete game 4-1 victory for the Mets.

Ronald Acuña, Jr. went 3 for 4 with a homer to help the first place Braves take the 5-1 game from Pittsburgh.

Sean Reid-Foley struck out 10 Marlins in 7 innings, giving up 4 hits and earned the 6-1 decision for Toronto.

Victor Reyes singled, hit a game tying double, added another double and a homer to lead the Tigers past the Yankees, 11-7.

They all owned baseball on September 2, 2018

END_OF_DOCUMENT_TOKEN_TO_BE_REPLACED

There is plenty of talent available this year especially in the high school ranks.

The draft is the best way to build a franchise and position yourself in a position for long term success. Jim Callis in 2005 got the first 18 picks right … hopefully one day I will do the same. END_OF_DOCUMENT_TOKEN_TO_BE_REPLACED

Posted in MLB Teams State Of the Unions, On the Verge: MLB Prospects, The Rest: Everything Baseball