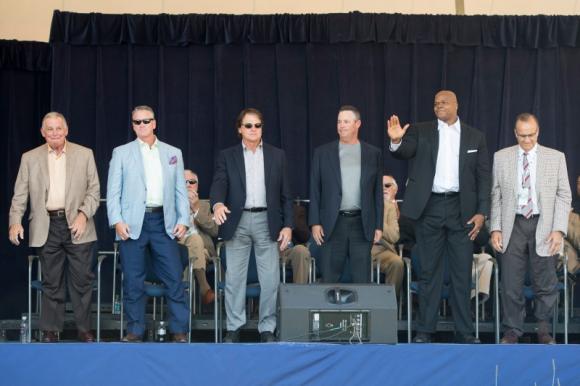 It was Hall of Fame weekend.

Frank Thomas thanked everyone including YOU, Greg Maddux made an interesting joke, Tony LaRussa failed to mention Canseco and Joe Torre‘s legacy is worth marveling over.

Plus talk about the rule changes for voting on today’s episode of The Sully Baseball Daily Podcast.

END_OF_DOCUMENT_TOKEN_TO_BE_REPLACED

With the trade deadline lurking this week, you have to factor this in when you are making bets.

I would be shocked if the Rays trade David Price before July.31, 2014.  This team has erased so many deficits since 2008, and they have been the best team in the league for the last 25% of the year.

I would also predict the Royals to add a bat for the last 2 months.

Pittsburgh has a lot of money in their wallets for a few salary dumps even if they have to wait for the non-waiver deadline.

Cincinnati is fading fast and needs to wheel and deal for some replacement help.

St. Louis has never played well without Molina, and while I love the A.J. Pierzynski addition, they must not stay stagnant here.

The Yankees should break the bank on several more trades now that they are going to be Luxury Tax Abusers yet again!

The Braves should do a deal, yet they have been hampered by all of the payroll B.J. Upton and Dan Uggla eat up.  Maybe 2014 is not their year.

END_OF_DOCUMENT_TOKEN_TO_BE_REPLACED

Comments Off on Current Odds To Win The 2014 MLB Divisions

How All Of The Indians Hitters Were Acquired: 2014 Roster Tree Shows A Good Job Done By The Organization

Terry Francona took over a team that ended up 68-94 after being competitive for the first couple of months of the 2012 season. The team aadded some key offensive FA talent in 2013., but Francona also cultivated the attitude of this young team all the way to a playoff berth and an AL Manager Of The Year Award. His club’s offense was a big reason why the team was able to do this, and the team is competitive again in 2014 with virtually the same roster – and nice power threats.

How All Of The Indians Hitters Were Acquired:

When we look at how this offense was put together, we saw a lot of decent draft picks, a few nice trades sprinkled in, and a few Free Agents signed along the way.

With Francisco Lindor coming along the way, this is probably the swan song for SS Asdrubal Cabrera, however one can’t forget this franchise fleeced the Mariners for the asset that was Eduardo Perez. to obtain his services.

Cabrera has had a nice stay in Cleveland, with 2 ALL – Star Selections, one Silver Slugger – and has provided nice defense for the last 8 years.

It wasn’t the 1st time Cleveland won out in a trade with Seattle.  Does Anybody remember Shin-Soo Choo for Ben Broussard?

As you will see in a future Pitchers Roster Tree for the “Tribe”, Cleveland has Josh Outman, Trevor Bauer and Bryan Shaw for the original Perez deal now. END_OF_DOCUMENT_TOKEN_TO_BE_REPLACED

Comments Off on How All Of The Indians Hitters Were Acquired: 2014 Roster Tree Shows A Good Job Done By The Organization

Carlos Santana capped off a 9 for 14 series by getting on base 5 times with a pair of homers and 2 RBI helping the Indians top the Royals, 10-3.

Josh Harrison went 4-6 with a double and a homer and a pair of stolen bases as the Pirates won 7-5 in Colorado.

Yohan Pino allowed just 4 hits and 1 walk in 6 innings while striking out 6 White Sox batters. He did not get the decision but set up Minnesota’s 4-3 victory.

Doug Fister pitched 7 shutout innings, giving up just 3 hits and walking 1 as the Nationals took a tense 4-2 game in Cincinnati.