Johnson is by far the most illustrious pitcher that has pitched for the franchise. He holds multiple pitching records for the team, and it will take some time for someone to even come close to breaking those records. The “Big Unit” came to the desert in 1999, and his impact was felt immediately, by him winning 17 games in his first season with 271.2 innings pitched and he struck out 364 batters. he would go on to win the CY Young Award his first four seasons with the club, while averaging 354 strikeouts per season in his first four years in Arizona. Johnson is 2nd all-time in MLB history with 4,875 career strikeouts.He along with Curt Schilling was crucial was in bringing a World Series title to the desert in 2001. He had a SO/9 of 11.5 during the eight seasons he spent with the Diamondbacks.

The Diamondbacks have had good years and bad years in terms of pitching for their club. The first season for the club which was in 1998, they lost 97 games and 69 of those losses were from the rotation, which caused to finish last in the National West Division.

Their rotation consisted of Andy Benes, Brian Anderson, Omar Daal, Willie Blair, Amaury Telemaco, and Jeff Suppan. The closer for them that season was Gregg Olson.

Click the Link Below to see the Hitters version 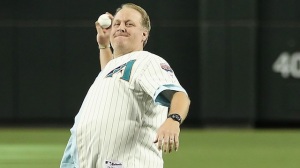 Curt Schilling was the other important player that helped the Diamondbacks win a World Series besides Johnson, and Luis Gonzalez. Schilling provided the club with another pitcher that could shut down opposing teams. With him and Johnson they won a combined 90 games during 2001 and 2002. Schilling had a great year in 2001, he won 22 games while throwing 256.2 innings, and striking out 293 batters with a 2.93 ERA. He also has the highest Win-Loss % in the franchise at .674.

The team made a tremendous leap in wins the following their inaugural year, and they won 100 games, while finishing first in their division. The main reason was because they signed a big free-agent pitcher, and he would pay huge dividends for the club.

Randy Johnson came to the desert and anchored the rotation for that year and many to follow. He was not alone with three other starters that also had at least 10 wins for the club. They were Daal, Benes, and Armando Reynoso.

This was the year that closer Matt Mantei came to Arizona from the then Florida Marlins for Vladimir Nunez and Brad Penny. The club also signed Byung-Hyun Kim as an amateur free agent.

This was also the year that Kim would be the inserted as the closer for the club. There is a constant theme, with closers and this club even in the early years for the franchise.

In 2002, Johnson and Schilling were joined in the rotation by Miguel Batista, Rick Helling, and Anderson. The team did make the playoffs that year, but lost in the division round.

The bullpen had Mike Koplove, Mike Myers, Mike Fetters, and Greg Swindell in that season.

They did not make the postseason again until 2007, and this is when we see some of the young pitchers that Arizona developed in their farm system get their time to shine. Brandon Webb, Micah Owings, Edgar Gonzalez, and Yusmeiro Petit made up their rotation.

They also had some veteran hurlers to round out the rotation with Livan Hernandez and Doug Davis contributing.

This was also one of the best years for their bullpen. Jose Valverde had a great season in the desert with Brandon Lyon, Juan Cruz, Doug Slaten, and Tony Pena supporting him.

They do have new breed of pitchers coming up and the future looks bright for both the rotation and the bullpen.

He led the NL in strikeouts, and won the CY Young Award four consecutive years while making the All-Star team in those four seasons as well. He also finished 7th in the MVP voting in 2002. Johnson earned co-MVP honors for his role in the 2001 World Series with his partner in the rotation Curt Schilling.

He also has the highest Win-Loss % for the franchise with it at .674, and he accumulated 875 strikeouts with his time in Arizona.

He was one of the early starters for the franchise and was crucial in the 1999 season for them, as he won 16 games in 214.2 innings pitched with a 3.65 ERA. He was one of those pitchers that helped the team out in the early years.

He served many roles for the team by starting in some games and fulfilling whatever the team needed him to do, but his main job was to pitch out of the bullpen. The best year for him was in 2001 where he won 11 games and had a 3.36 ERA in 48 games, while starting 18.

He was their version of Josh Collmenter, filling any role that was required of him.

Brandon Webb 2003-2009 87-62 (.584) 3.27 ERA: Webb is one of the pitchers that Arizona developed in their farm system. He benefitted from joining the rotation when the Diamondbacks still had Johnson & Schilling.

He became our ace of the staff in 2006 with 16 wins and an ERA of 3.10 and he also won the CY Young Award that year as well. He would be the runner-up in that award the following two seasons.

He had his career cut short, when a shoulder problem only allowed him to make one start in 2009 and he would later retire. Webb is still one of the best pitchers that Arizona had pitch for them and the fans appreciate what he did for the team.

Koplove was very good as a reliever for Arizona with side-arm type delivery. He was great in 2003 when he threw 37.2 innings with a 2.15 ERA. He also gave the bullpen a different look that season.

The early part of his career with Arizona, especially in 2006 and 2007 he had an ERA of 3.89 and 2.68 respectively. Those seasons are when he was most effective, and he threw a combined 143 innings.

He was crucial to Arizona making the playoffs in 2011, as he won eight games that season and had a 2.79 ERA. Owings was also a very good hitter, as he had a.298 batting average in 131 at-bats with the Diamondbacks.

He was known for submarine style of pitching, and the blown saves in 2001 World Series against the New York Yankees. He also has thrown the most innings for a reliever in team history with 325.2 innings.

Patrick Corbin has a great chance to make this list, as long he improves his development as pitcher, and judging by the way he has performed this season I see no reason why he will not get better.

Click the Link Below to see the Hitters version 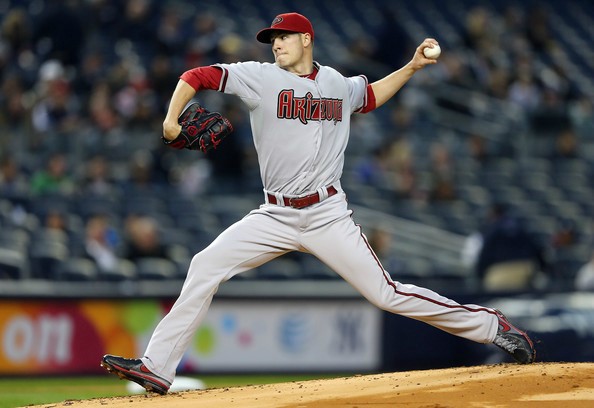 Patrick Corbin is already having a great season for Arizona, and is being rewarded for his performance,as he was selected to be in this years All-Star game. He is he ace and the leader of the starting rotation for the team. Corbin is 10-1 with a 2.40 ERA and has pitched 123.2 innings to go along with 99 strike outs and a 0.97 WHIP. The talented left-hander is holding left-handed batters to a .140 batting average this season. He is also holding the opposition to a .190 average when runners are in scoring position. The starting rotation for the snakes looks great with him anchoring the staff for years to come.

A big thank-you goes out to our ”Lead Baseball Columnist and Minority Website Owner” Chris Lacey. Chris has been a fan of watching baseball since the age of 13. Now he does like all sports – but his favorites after baseball are hockey and basketball.

Chris is very good with computers and is a college graduate.

Chris is very active on Twitter and especially during the baseball season chatting with other Diamondbacks fans. Be sure to follow him and talk about the great game of baseball. Chris is addicted to writing baseball.

Check out his work for rantsports.com here, for baseballhotcorner.com here, for venom strikes here and if you can believe it – fanrag.com here

I blog about baseball for various websites including RantSports, venom Strikes, & MLBReports.
View all posts by aelacey »