The 30 MLB Park Road Trip has been mastered by about 25 people who have accomplished the feat in under a month. We are going to keep giving the extreme ballpark chasers some more food for thought here.

The Factor 12 (F12) is an analytic measurement utilizing league average performance to compare the value of all MLB pitchers on 60ft6in.com.

My grandfather was a traveling salesman for most of his working life.  Frequently, he recalls stories about selling his wares in exotic places such as Keokuk, Iowa, Hannibal, Missouri, and Cairo, Illinois.

However, the real Traveling Salesman Problem (TSP) asks this question: “Given a list of cities and the distances between each pair of cities, what is the shortest possible route that visits each city exactly once and returns to the origin city?”

Applying this computation to all 30 MLB stadiums is more complex given the nature of the regular season schedule.  A handful of metropolitan cities host two clubs enabling for travel to occur in the same city more than once.

Extreme ballpark chasers are often left to the mercy of the schedule eliminating a perfect directional path.

After optimizing the mileage breakdown between stadiums, this is the shortest possible DRIVING route discovered:

The Mariners have one of the gem stadiums in all of baseball right now.  Since its next closest park is 800 Miles away (o.co Coliseum) and usually will head right into a doubleheader opportunity (or even 2) out of the 5 California Parks, you almost have to start or end your trip in the Pacific Northwest City.  You simply should start there, preferably during a matinee game, before taking on the I – 5 South for a 14 Hour drive to the Bay Area.  At least with a park this far away in seclusion, you are guaranteed a game with the retractable roof!

Safeco Field, home of the Seattle Mariners, is a geographical outlier with zero MLB stadiums within 800 miles of the ballpark. Any record attempts by land will require those interested to start or end the trip in the Emerald City.

Kauffman Stadium is the linchpin when optimizing the shortest distance strategy.  At first glance, Busch Stadium appears to be the next closest stadium. Yes.  However, after manipulating all of the variations, it is not the most optimum next location.

The utilization of the TSP approach enables a potential traveler to watch a game at all 30 MLB stadiums in 24 days while completing SIX double headers.

There is only one drive that exceeds 1000 miles, which is impossible to avoid in any land record-breaking attempt.

Unfortunately, the 1002.6-mile drive between Minute Maid Park in Houston, TX and Tropicana Field in St. Petersburg, FL will come into play. 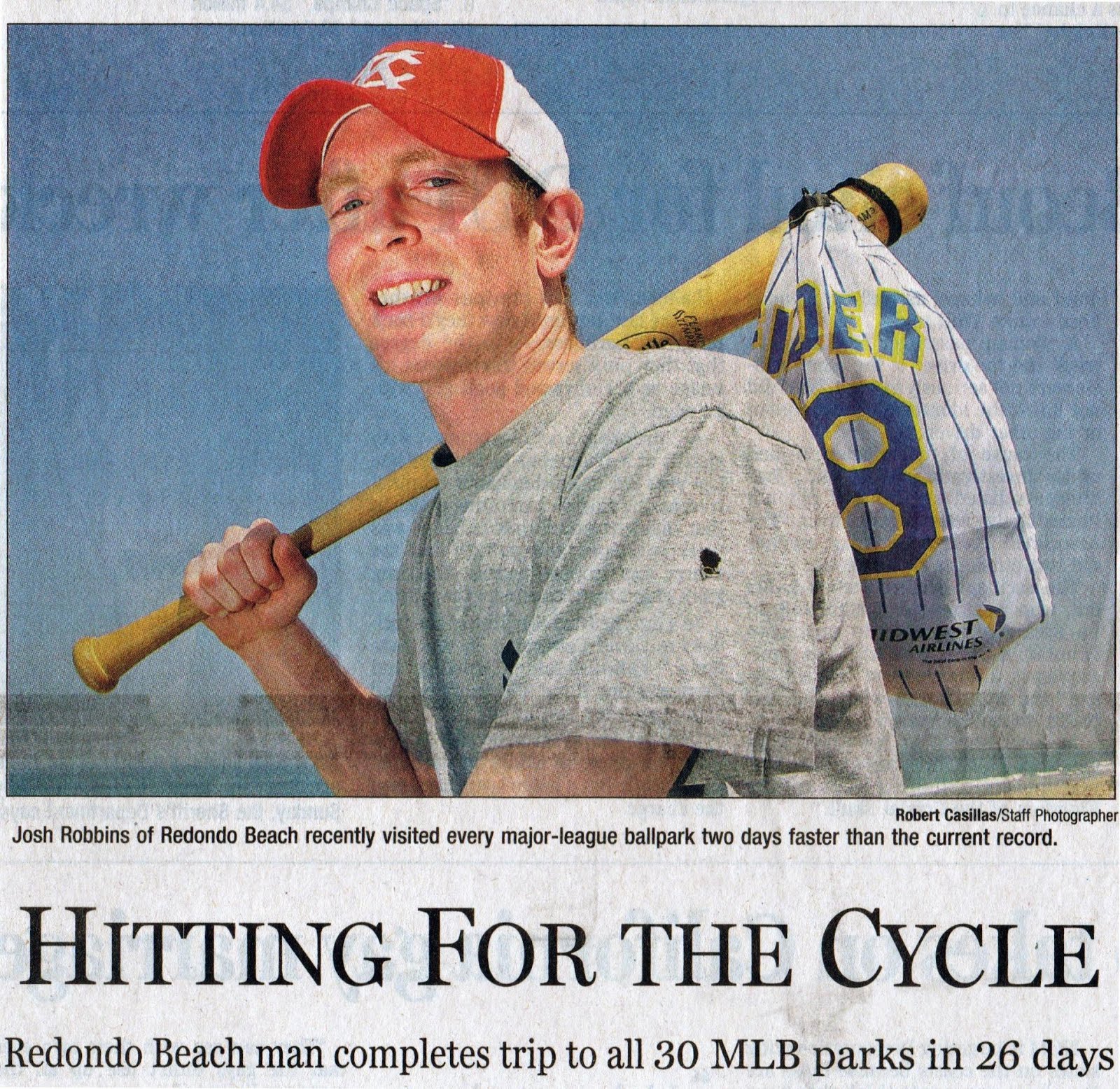 In 2008, I completed the journey to every MLB stadium in 26 days utilizing only land travel.  Thanks to the help from eight different friends and family members who shared the 14,212 miles of driving.

Here’s the schedule breakdown of Thirty26: 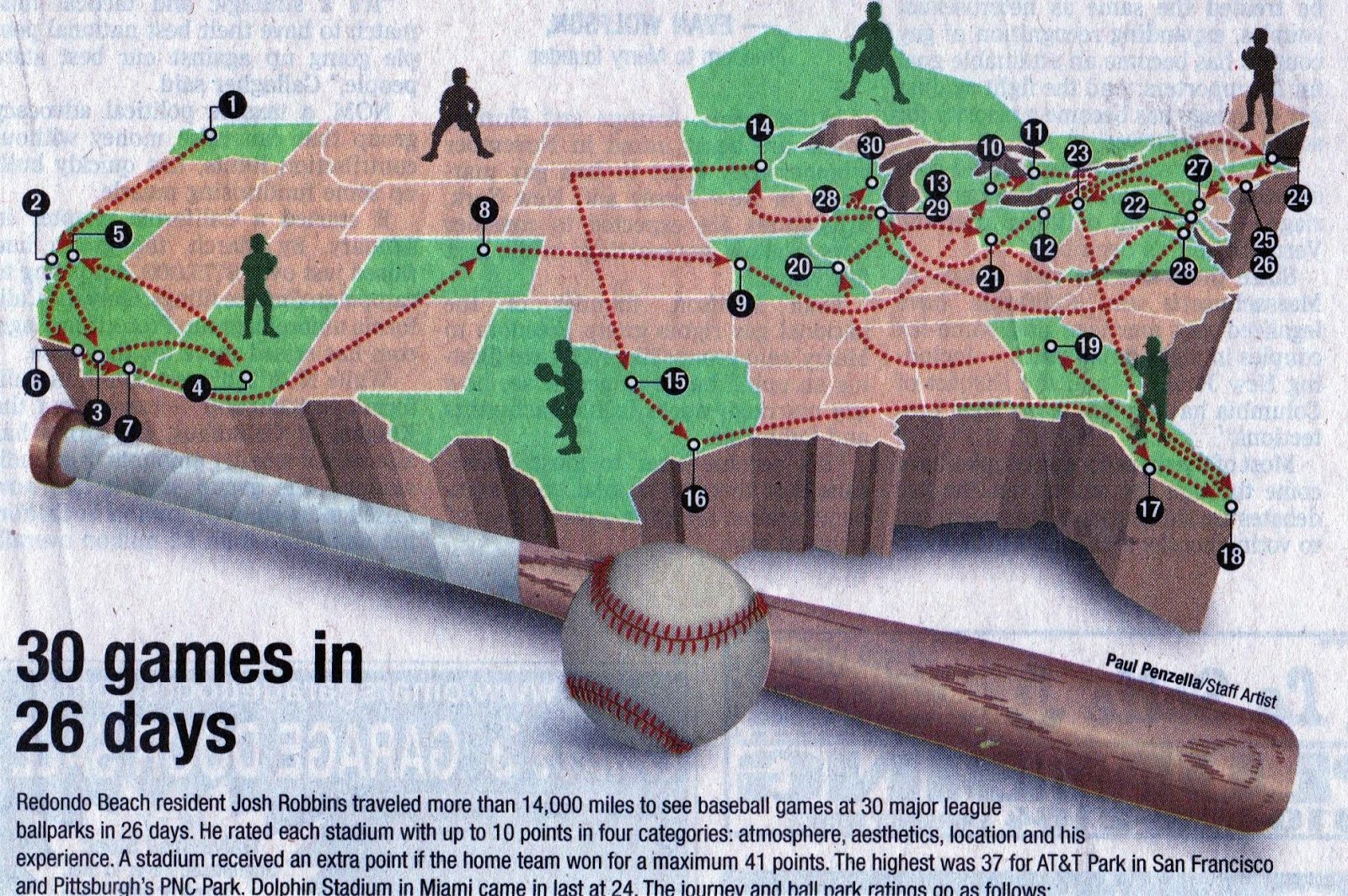 As illustrated in the graphic, one can see the odometer reading was not minimized during this transcontinental odyssey. Unfortunately, the MLB regular season schedule dictates ones ability to challenge such lofty goals.

Three legs of the journey exceeded 1000 miles, including TWICE in a three-day span. The most thrilling drive of the trip was the 1082 miles from Petco Park in San Diego to Coors Field in Denver.

There was only 14 hours on the clock from the last out of the Padres game to the first pitch at the Rockies game the next day.  Remarkably, we made it to the game on time by TWO minutes!

Use the TSP only as a guideline because the likelihood of a perfectly formulated schedule is nearly impossible.   The 2014 MLB schedule should be announced in mid-September for those interested in plotting the next great MLB road trip.

My journey included 4 doubleheader attempts (LAA – SD), (NYY – NYM). (PHI – WSH) and (CHC – MIL) to conclude my 30 park journey in 26 days quest.  (This is Still the CURRENT LAND RECORD – ‘For Fastest to view a complete Game’ for all 30 MLB Parks.’ I was able to raise a lot of money for youth baseball in my attempt.

***Josh Robbins is a Video-Journalist and Baseball Historian living in Gilbert, Arizona.  In 2010, he earned a Master’s Degree in Sport Management from CSU-Long Beach.

From June 16 to July 11, 2008, he watched a game in all 30 MLB stadiums in a world record 26 days by car.  Please email Josh at robbinsjosh@hotmail.com or visit 60ft6in.com for more information about the Factor12 Rating.***