Shane Bieber threw a complete game victory, striking out 8 Angels while only allowing 2 runs to earn the 6-2 decision for Cleveland.

Shin-Soo Choo reached base 5 times, scoring 3 and driving in another to help the Rangers top Detroit, 9-4.

Sonny Gray threw 7 shutout innings, holding Atlanta to 4 hits. The Reds bullpen would blow the lead but the bats would come to the rescue in extra innings for the 6-4 final.

Max Muncy went 4 for 5 with a homer and a walk off 2 run double in the bottom of the 9th to give the Dodgers a wild 11-10 victory over San Diego.

Randal Grichuk went 4 for 5 with 2 doubles but Toronto fell to Baltimore, 6-5.

Brad Keller threw 7 innings, allowing 2 runs and striking out 7. But the Royals were blanked by Minnesota, 3-0.

Donovan Solano hit a pair of homers in the Giants 6-2 loss to Colorado.

Adam Wainwright pitched into the 6th innings, allowing 3 runs and striking out 7 Oakland batters but was on the wrong end of a 4-2 decision for St. Louis.

END_OF_DOCUMENT_TOKEN_TO_BE_REPLACED

A Wild Weekend Reviewed including the Astros No Hitter: Locked On MLB – August 5, 2019 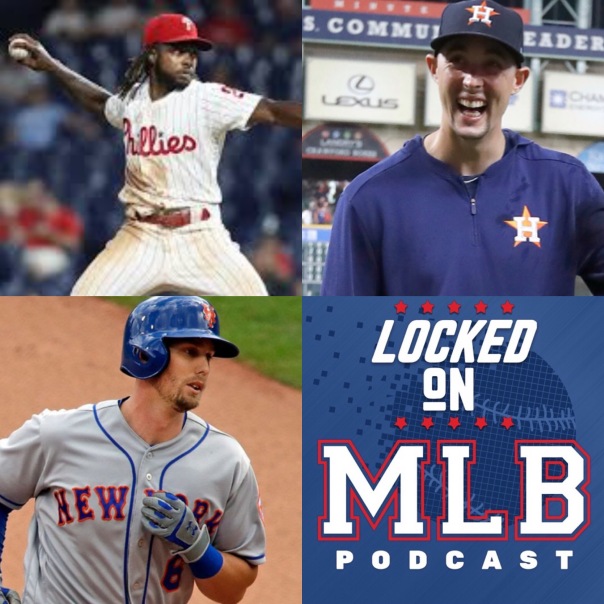 The Phillies used an outfielder as a pitcher and a pitcher in the outfield. An Astros afterthought started a no hitter in his first Houston start. And the NL Wild Card is so mediocre, losing teams have a shot.

This is the Locked On MLB Podcast. I am your host Paul Francis Sullivan. Please call me Sully.

Comments Off on A Wild Weekend Reviewed including the Astros No Hitter: Locked On MLB – August 5, 2019