Was the Jon Lester trade a mistake?

Do they desperately need Yoenis Cespedes?

Or would they be in worse shape relying on a slumping Sonny Gray or Scott Kazmir at this point?

And what does this have to do with the beef stroganoff recipe by comedian Ritch Duncan?

It all makes sense (or maybe it doesn’t) in this episode of The Sully Baseball Daily Podcast.

END_OF_DOCUMENT_TOKEN_TO_BE_REPLACED

My record was 2 – 4 in establishing the best odds in the Division  for value last week, however it is a lot different throwing down bets on the Division on this time of year.

I went 2 – 1 in the National League – and 0 – 3 in the American League with the Yankees, Mariners and Indians all being further underdogs, despite New York and Cleveland having okay weeks.

Atlanta fell further off the Division with scoring 1 run in their last 28 innings, including having been no – hit – than shutout by the Phillies in back to back contests.

San Fran and St. Louis helped me not be abysmal with prognosticating  – with registering my only 2 wins..

Picking up Adam Dunn should help compensate for the lack of offense the team lost with Yoenis Cespedes.

I also was big on St. Louis last week, and will continue to ride that truck. as the Brewers are probably done in the Division.  I hate the loss of Carlos Gomez to injury…and where is Ryan Braun?

The Giants are one of the hottest NL teams, while Clayton Kershaw is making a brilliant case for NL MVP.

There is no money to be made in the AL and NL East.

If you are wishing to wager on the Tigers or Royals, there is nice value there.

I am still of the mindset that the Indians at 20/1 odds – and trailing within 5 games is a good longshot stab for a pick. END_OF_DOCUMENT_TOKEN_TO_BE_REPLACED

Comments Off on Current Odds To Win The 2014 MLB Divisions

Another week has passed – and it is time to get serious in our World Series picks.

To start off, I have eliminated 13 teams from the chance to win a World Series.  These clubs include: BOS/CWS/MIN/TEX/HOU/PHI/NYM/COL/SD/ARI/CIN/CHC/TB.

Miami is very close to being put on that list.  Tampa Bay is 9.5 Games Behind the playoff bar, and simply have too many teams to pass to even qualify for the 2nd Wild Card.

I had yet another wicked week of picking value, going 4 – 1, and only suffering a loss because I picked the Jays to go up in their odds.  They were only my 5th favorite on the list.

To my surprise, the Mariners have gone up in the odds, despite being just 3 – 5 in their last 8 games.  Oakland finally fell out of the favorites spot for the 1st time in months.  I was right on this one too.

I also had the fall of the Brew Crew last week.  I did get thwarted on a winning week by the Giants reeling off a 7 – 1 record in their last 8 games.

Kansas City moved up as a favorite as well, but that was a fluke coming off a losing week of baseball.  Still I will take the win.  They are still tied for 9th in odds with San Francisco.

The Royals have a better chance of winning the AL Central, than the Giants have in catching the Dodgers in the NL West.  Having said that, the Giants have taken a nice lead on the 1st position in the Wild Card.

I am still not hot on Milwaukee, and figure them to drop right out of the Central – and fully expect Atlanta to come up for the 2nd Wild Card slot now.

The Cardinals are in  great shape to make another September run with Yadier Molina back behind the plate, and I am locking them down as my favorite pick this week for value. KC is #2 on my faves list.

Baltimore should be rated higher for the very reason they own the biggest division lead.

Finally I like the longshot odd for the Blue Jays.  Out of the teams outside the periphery of the Wild Card Race, these guys are probably the most capable of stringing a lot of wins if their offense becomes hot.

At +3000, the Braves have a nice payout sitting out there.  Yes they can’t score right now, but the Marlins, Phillies and Mets will be the predominant schedule of these guys. and they also play the Nats some more.  They could squeak into a playoff spot.

I think the Angels have jumped too much on the favorites side, and may recede towards Oakland in the next few weeks.  I am banking on Seattle to drop some more in the Standings.

The Brewers are in a free fall, and have played to below .500 since the start of May.

Finally….The Yankees will be lucky to complete the year at .500 END_OF_DOCUMENT_TOKEN_TO_BE_REPLACED 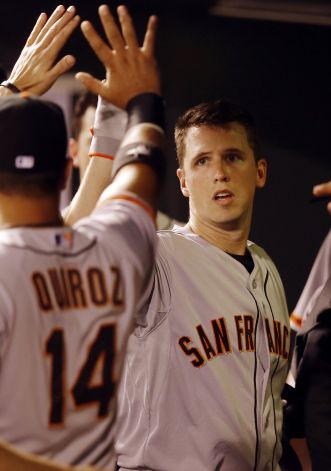 Buster Posey homered and hit a pair of doubles, driving in 4, leading the Giants in a wild comeback against the Rockies, 12-7.

Clayton Kershaw allowed 3 hits (including a solo homer) 1 run, and 2 walks while striking out 8 Nationals while getting the 4-1 decision for the Dodgers.

James Paxton pitched shutout ball into the 8th, finishing with 7 2/3 innings, 4 hits and 2 earned runs as the Mariners held on in Oakland, 6-5.