Miguel Cabrera: Cooperstown Bound. Undoubtedly, “Miggy” is one of the great players of this generation. Watching him play the game every day is a gift to baseball lovers.

The best hitters in baseball aren’t hard to identifying, but arranging them is the tough part.

The “new” era of hitters have arrived on the scene. This doesn’t necessarily imply that some of the older hitters might as well call it quits, rather, it means that they have taken the backseat.

Mike Trout is baseball’s consensus best overall player, factoring in defense and speed, but Miguel Cabrera gets the nod as baseball’s best hitter.

Cabrera won the Triple Crown award in 2012, and in turn, beat out Trout for MVP honors.

As for the stats, well, they’re also impressive. He was second in the American League in oWAR (offensive WAR), third in ISO (Isolated Power), led the MLB in OPS, slugging percentage, total bases and extra base hits.

Cabrera’s compact swing enables him to do damage on most pitches. In 2012, he hit .344 on hits to left field, .412 on hits to center field and .424 on hits to right field. These three figures simply imply that Cabrera hits the ball where it’s pitched. Yes, it’s a simple approach, but it’s proven to be the most effective approach in baseball. The stats speak for themselves.

Ryan Braun has been one of the most consistent hitters in MLB again over the last 5 years and has won 5 straight Silver Slugger Awards – while he  also has made 5 straight ALL-Star Appearances.

Again, we’re talking about just hitting, and Ryan Braun is a better hitter than Trout.

If it wasn’t for the Brewers slow start and the aftermath of the PED case, he could’ve very well won the MVP award for the second consecutive season because his numbers were among the NL’s best. Braun led the National League in several key categories including home runs, OPS, total bases, extra base hits and runs created.

The hitters friendly Miller Park does augment Braun’s numbers partially. According to ESPN Park Factors, Miller Park was the easiest park to hit Home Runs in during the 2012 season. Meanwhile, Angel Stadium was the seventh hardest park to hit home runs in. Yet Trout still managed to hit 30 bombs.

Ah, yes. You could make a case for Trout being baseball’s best hitter, sure. But baseball fans often get caught up in his speed and defensive abilities, which creates a lop-sided argument.

Trout’s hitting is impressive, to be sure. He hit 30 home runs in 2012 and totaled the highest oWAR in baseball, and the accolades don’t end here. Trout won the AL Rookie of the Year award by a land-slider, and was also worthy of MVP honors if it wasn’t for Cabrera catching fire in the final few months of the season.

Like all hitters,Trout still has his flaws. His power is likely to come back down to earth in 2013, settling in the 20-25 home run range if the Angels want him to fit the ball of a more traditional leadoff man. Though if he’s unleashed, his home run total could easily surpass 30 over a full season of at-bats. It’s all about the approach he takes, and nothing is exactly set-in-stone yet.

It’s also likely that Trout’s BABIP (Batting Average on Balls In Play) of .383 will decline, as that mark will be tough for him to sustain. While he’s almost guaranteed to regress, his worldly speed will help him collect the occasional infield single, and thus boost his BABIP.

Trout is more than worthy of the third spot on this list. If his spectacular rookie campaign is a sign of what’s to come in the next decade-plus, then he’ll easily takeover the top spot in coming years. 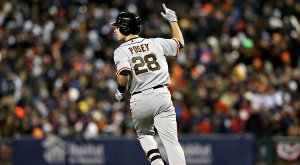 Buster Posey is hands down the face of the San Francisco Giants. Having only played 1 full year in the Majors he already has 2 World Series rings and an MVP (2012) trophy. He also won the Rookie Of The Year in 2010 and the Batting Crown in 2012.

Buster Posey checks in as the fourth-best hitter in baseball. He is as consistent as they come, but he doesn’t put up the big, flashy home run totals, evidenced by his total of 24, albeit his knack for the double boosted his slugging percentage to .549, which ranked 10th in baseball.

The headline that dominated Posey’s MVP season was his second half. In 71 games, he hit .385 with a 1.102 OPS, and practically ran away with the MVP award, and batting title. And of course, the World Series ring.

Much like Cabrera, Posey can hit the ball to all fields. Last season he hit .387 on balls to left field, .434 to center and .411 to right. Opposite fielding hitting doesn’t exactly bode him well at the pitchers friendly AT&T Park, but on the road, he’s a threat to all fields.

Another factor to consider is the protection Posey has in the Giants‘ lineup, or lack of. Hunter Pence had a nose for the RBI after coming over from the Phillies at the trade deadline, but his free-swinging habits didn’t lead to any consistency. Pablo Sandoval could’ve been that guy, but he missed 54 games and struggled to get in a good groove.

This lack of protection didn’t result in a ton of walks for Posey. Still, he didn’t get many good pitches to hit towards the end of the season, and that trend could carry over to 2013 if no one steps up.

The 2012 season was the first year in which Posey garnered 500-plus at-bats after suffering a season-ending leg injury in 2011. So yes, 2012 was technically his first full year in the majors. Meaning, the sky is really the limit for the two-time World Series champion.  He has a Career 3 Slash Line of .314/.380/.883

Andrew McCutchen has yet to get the respect he deserves. Perhaps the fact that he plays for the not-so-attention grabbing Pittsburgh Pirates team has something to do with that. Even so, if it wasn’t for a Pirates’ summer collapse, McCutchen probably would’ve won the NL MVP.

Similar to Posey, lineup protection has been a rarity for McCutchen in recent years. A combination of Garrett Jones, Neil Walker and Pedro Alvarez made up what was a sub-par cleanup unit in 2012. Jones and Alvarez were both prone to inconsistency while Walker provided some stability, but still isn’t a prototypical cleanup hitter.

Better lineup protection will only improve McCutchen’s numbers in 2013. He led the NL in oWAR last year, and led the NL in Hits with 194. If the Pirates’ middle of the order decides to hit, then we won’t being seeing the same old hapless Pirates. 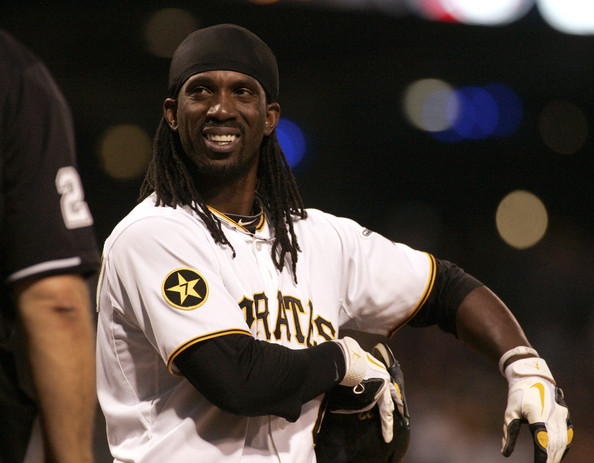 Andrew McCutchen blitzed his way onto the NL MVP scene last year. The Pirates Slugger was in the top 5 in most offensive categories.  He had an impressive 3 Slash Line of .327/.400/.953.  At just 26, he is just entering his prime.  He was an ALL-Star, finished 3rd in NL MVP Voting and took home a Silver Slugger Award for his efforts.

Jake Dal Porto is a Baseball Writer with MLB reports and a student from the Bay Area. Jake’s favorite sports moment was when the Giants won the World Series back in 2010. He loves to use sabermetrics in his work. He thinks they are the best way to show a player’s real success compared to the basic stats such as ERA, RBIs, and Wins. Jake also enjoys interacting and debating with his readers. Follow him on Twitter: