Granderson Is Out For 10 Weeks: What Can Cashman Do?

Granderson has had back to back 40 HR years with the Yankees in 2011 and 2012. New York can ill afford to be without a productive LF for the 1st quarter of this season. I believe they should make a trade to bolster their team. When Granderson comes back, you would always have an extra player for depth still.

The start of the season is starting to look extremely bleak for the Yankees so far.  Derek Jeter is coming off of a broken ankle, A-Rod is out indefinitely with (insert whatever ailment here) until after the ALL-Star Game, Mariano Rivera is 43 – and trying to make it through one more season after tearing up his ACL last year, Phil Hughes is having back spasms, Joba Chamberlain seems healthy – (but you never what freak injury is going to happen to him next,) Michael Pineda is still recovering from shoulder Surgery, so what else was going to happen?  Add Curtis Granderson and a fractured right forearm to the walking wounded list.

This injury should alarm the Yankees and their fans.  The team is not strong depth-wise, as they have been in decades, so “The ‘Grandy Man’ not being able to play until early May should cause New York GM Brian Cashman to explore all of his options.  Like I have said in previous articles – ‘Financial Armageddon’ is coming for the club in 2014, plus the team is rapidly becoming older by the year.  It is safe to say that this year might be the last kick at a championship for some time.  What may the Yankees do to replace Granderson for the 1st quarter of the season?

Juan Rivera hits a Walk-Off for the Dodgers:

END_OF_DOCUMENT_TOKEN_TO_BE_REPLACED

Hamilton Strikes Out Again In Texas 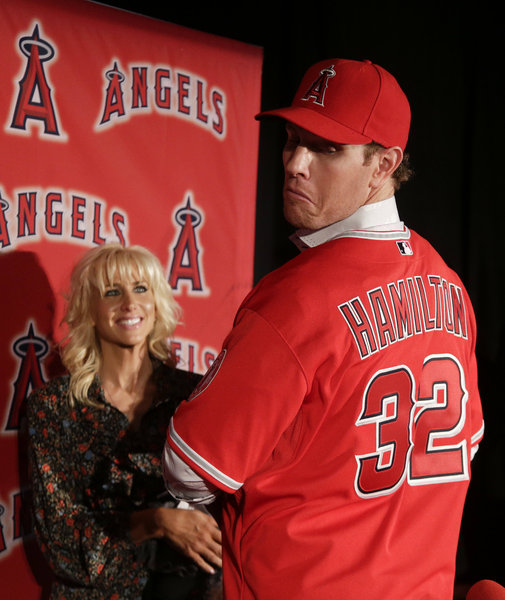 From the Editor’s Desk ***There will be no highlights,captions or additional statistics in this article.  Some of the articles we have are of the seriously opinionated angle that doesn’t warrant these peripheral things to a post.****

Baseball fans in Texas were heartbroken in December when the news broke of OF Josh Hamilton signing with the rival Angels. Many had grown to love his personality and ability on and off the field, even buying Hamilton jerseys when he signed with his new team. The Slugger had given several good seasons to the fans in Arlington, however bitter it did end. So you could imagine the turmoil in Texas after his interview February 17 with comments regarding the Dallas/Fort Worth area and its fans. In an interview with CBS, Hamilton gave a few choice words about the area not being a “true baseball town” and that the fans there were “spoiled, quickly”. You would have thought Nolan Ryan left for the Yankees.