Paul Francis Sullivan, aka Sully… baseball nut and podcaster. He does this every day.

On this edition of The Sully Baseball Daily Podcast, I discuss why I think the Astros are doing the right thing by gutting the team and why in a few years they will be the envy of baseball.

Brandon Webb’s career was noteworthy and a warning

Brandon Webb is retiring from major league baseball, according to Jerry Crasnick of ESPN.com. This hardly seems like a monumental announcement this spring. Webb has been out of sight and out of mind since the beginning of the 2009 season. His official retirement notice is reminiscent of a band announcing their breakup long after they had their last hit.

But Brandon Webb’s career, brief as it was, was remarkable and also should be remembered the next time an ace pitcher looks for a long term extension.

As outlandish as it may sound now, Brandon Webb was putting together the beginning of a Hall of Fame career. This is not hyperbole.

The former University of Kentucky star was an 8th round draft pick of the Arizona Diamondbacks in 2000.

He shot up through Arizona’s farm system and by 2003, the 24 year old Webb was a major leaguer and finished 4th in the Rookie of the Year vote. He posted a 2.84 ERA over 180 2/3 innings, winning 10 games for an Arizona squad that finished third in the National League West.

By 2006, he became an elite pitcher. He led the league in wins, shutouts and ERA+ and had the top WAR for pitchers. He won the National League Cy Young Award and looked like he was just getting warmed up. END_OF_DOCUMENT_TOKEN_TO_BE_REPLACED

It has been a great day at the MLB Reports.com.   So much so, that I thought we would write our own State Of The Union Article.  We are rapidly becoming one of the best independently owned – and fan run websites around the internet.  I know this is because we have awesome readers who share the same passion as we do.  I took over this website in November after writing for about 1 year.  Jonathan Hacohen (Founder, previous owner) had a vision that I have continued to run with.  We were searching for like-minded writers that share the same baseball passion as we do.  Since November 2oth, we have added 22 MLB Team Correspondents – and several new specialist writers.  We have taken a bit of a different direction but with the same model in mind.  We will get to some of those people in Part 2 of the State Of The Union.

We are all  here to work our tails off about spreading the game of baseball through written word.  We spend countless hours researching, writing, editing, checking stats, uploading pictures, tweeting, sharing on Facebook and interacting with a lot of you – in order to operate this website.  We are not making Millions, hell it really doesn’t pay very much at all.  We do it for the love of the game.

Having said this, we have some really exciting news to pass on.  Paul Francis Sullivan (please call him Sully) Follow @sullybaseball is joining our MLB Reports team as our Lead Baseball Writer and #1 personality.  Nobody works harder in the business than Sully.  He will be writing several articles a week and posting daily PODCASTS.  I am not lying here… Daily!  Sully has put up a daily PODCAST for over 110 days in a row now.  He usually talks on them for about 20 minutes or so.  He will share these with you.    In the last 10 months, Sully also has written over 335 articles on MLB Baseball.  This man loves the game and we are ecstatic beyond belief to have him part of our team.  We all hope that you support and welcome him.

Sully has been writing baseball forever – and you will love his style. He will also have his own page here at the MLB  Reports – that he will be able to post other stuff other than articles and podcasts.

Here is his quick biography:

He is currently a producer for Wild Eyes Productions in Los Angeles. Sully has previously produced such shows as”Axe Men”, “The Daily Show with Jon Stewart” and “The Bonnie Hunt Show.” He received an Emmy nomination for his work on San Francisco public television.

An award-winning filmmaker, he directed the feature film “I’ll Believe You” as well as many short films including “Sergi” as featured on PBS’ “Independent Lens.”

He has been a contributing baseball writer for USA Today, Baseball Digest, The Hardball Times and Time Out New York. His videos can be found on the Sully Baseball channel on YouTube. 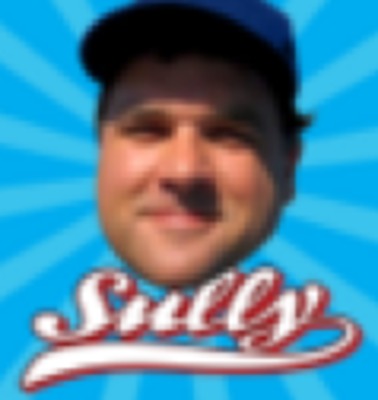 Sully is jack of all baseball trades for skills. Audio, video, writing, producing and directing. He will be entertaining as anything you will hear or read on online – guaranteed!

Chuck Booth- Lead Baseball Analyst/Website Owner and author of the Fastest 30 Ballgames:   To learn more about my  “The Fastest 30 Ballgames Book” and how to purchase it, click here . You can also follow my Guinness Book of World Record Successful Bid to see all 30 MLB Park in 23 Days- click here.  I am happy to be part of such an awesome Magazine-Style Baseball Website and am looking forward to talking to all of the fans of the MLB.  You can reach me on Twitter here Follow @mlbreports

.159 Batting Average, 11 HRs, 42 RBI, 177 SO, $12 Million. Those are the #’s posted by Adam Dunn in 2011 during his first season with the Chicago White Sox in just 415 AB or two-thirds of a season. Quite possibly one of the worst statistical seasons in MLB history. Far from Dunn’s previous season averages leading up to that point in his career:  .248 Batting Average – with 33 HRs and 82 RBI. These were not the #’s the White Sox thought they were getting when they signed Dunn to a 4 YR/$56 Million Contract prior to the 2011 season. Dunn never was a high average kind of guy,  has always struck out a lot (as a lot of power hitters do), but also walks a lot. Much to Dunn’s credit, he turned everything around in 2012 hitting (only) .204, but with 41 HRs and 96 RBI. His turnaround season was a big reason for  Chicago’s success in 2012.

Dunn has been one of the game’s premiere power hitters since 2004. Yet, to this date, has never been on a playoff team. He and the Sox came close in 2012, but fell short behind the Tigers. Dunn surpassed 400 HRss last year for the Sox, ( the same year that his teammate Paul Konerko  hit his 400th. Konerko actually hit his 300th HR in the same game, back-to-back with, then teammate, Jermaine Dye) and has a great chance to surpass 500 HR’s. While Dunn will probably fall short of 500 HRs in his next 2 seasons with the Sox, you have to figure he’ll catch on with a team in 2015 and get there. A common complaint about Dunn is, and has been, his average. Last year Dunn hit a “robust” .204, yet still managed to have an OBP of .333. Not quite as good as his career OBP of .370, but not awful either. For a guy that strikes out as much as he does, Dunn sure walks a lot. Though Dunn walked 105 times last year, his K’s more than doubled that amount with 222.

END_OF_DOCUMENT_TOKEN_TO_BE_REPLACED

Comments Off on Adam Dunn: The New Dave Kingman?

Luhnow Spins His Trade Magic Again For The Astros In: Get Carter 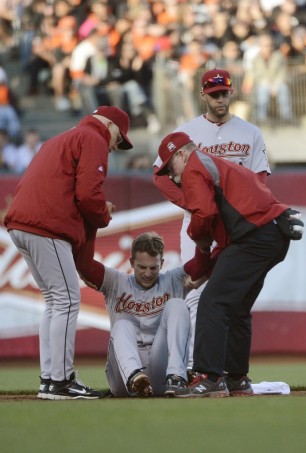 As I’m sure you’ve heard by now, the Astros have traded Shortstop Jed Lowrie and Pitcher Fernando Rodriguez to the Oakland A’s for Chris Carter, Brad Peacock, and Minor leaguer Max Stassi. Astros mastermind General Manager Jeff Luhnow worked out another amazing trade, getting anybody to agree to take Fernando Rodriguez all on its own is a miracle, but getting more than what he’s worth is astounding.

He’s worked nothing but pure trade magic during his first full calendar year with the club, dumping off Dan Carpenter, Brandon Lyon, AND Carlos Lee over the course of last season. Not to mention plenty other players he traded as well, yielding a number a top prospects, making the Astros’ farm system go from worst to first.