← 2012 MLB Draft Picks: Signings, Failures, and Surprises
Bryan LaHair: The Future of the Cubs or Simply Another Trade Deadline Candidate? →

The two players shown throughout the film are Miguel Angel Sano and Jean Carlos Batista. Sano is portrayed as an extremely talented fifteen year-old, who comes from a very poor family. As you may know, Sano is now in the Minnesota Twins organization, and he has more raw power than any other player in the minors. Throughout the film, Batista opens up about the death of his father in a dramatic eye-opening fashion. He ends up signing with the Houston Astros, after a major discovery is made by Major League Baseball that alters his signing bonus.

Conspiracy is a reoccurring theme in this film. The directors definitely take the side of the Sano family, who try to prove that they are being unfairly treated. Rene Gayo, a scout for the Pittsburgh Pirates will do anything he can to sign Miguel Sano, and he is well-aware that Pittsburgh doesn’t have the money to compete in a bidding war with the Yankees or Red Sox. So instead of missing out on a once in a lifetime talent, finds a sneaky way to lower the price for Sano. Despite desperate attempts by the Sano family, Gayo is successful in lowering the market value for Sano.

Jean Carlos Batista has a very close relationship with his trainer ever since his father passed away when he was just 10. Batista works very hard in order to get a signing bonus when he turns sixteen. At one point in the film, the directors talk to his mother, who is relying on Batista to get a huge signing bonus. However, when Batista turns sixteen, his trainer discovers some uninspiring information that suggests Batista has been lying to him. It’s a very serious subject, because the trainer has given Batista a place to eat, sleep, and play baseball for the last few years. He’s been personally invested in Batista, so as you can imagine, he’s very angry and disappointed when he discovers Batista’s lie.

“Ballplayer: Pelotero” gives a behind-the-scenes view at everything that goes into signing Dominican prospects. Miguel Sano and Jean Carlos Batista both have different fascinating backgrounds, and the directors do a great job at getting the players to open up. For anyone interested in how Dominicans try to take advantage of Major League Baseball, and how Major League Baseball tries to take advantage of Dominicans, “Ballplayer: Pelotero” is a must-see.

Here is a link to the movie’s Amazon page, with more info.. 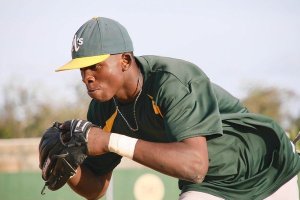 ***Today’s feature was prepared by our Baseball Writer, Sam Evans.  We highly encourage you to leave your comments and feedback at the bottom of the page and share in the discussion with our readers.  You can also follow Sam on Twitter. (@RJA206)***

← 2012 MLB Draft Picks: Signings, Failures, and Surprises
Bryan LaHair: The Future of the Cubs or Simply Another Trade Deadline Candidate? →