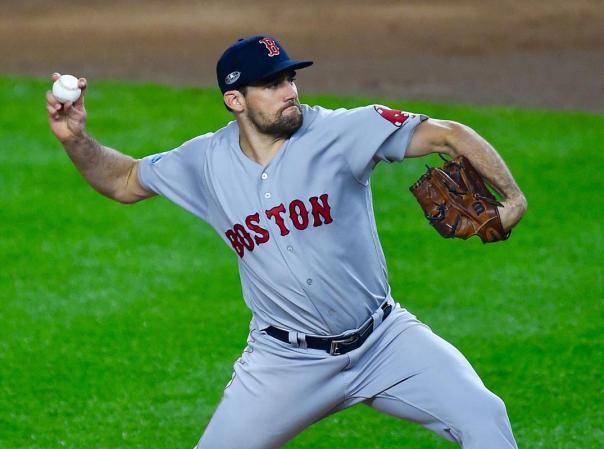 Brock Holt hit for the cycle and wasn’t even the star of their game! Nathan Eovaldi became the ace of the post season and it is safe to say the Red Sox not only owned October but owned the Yankees.

Meanwhile the Astros and Dodgers advanced with final scores that were more lopsided than the games indicated.

So who owned October?

Each winning team for every post season game gets a pitcher and a hitter who earn a full WOO (Who Owns October.)

And at my discretion, I award a 1/2 WOO’S to a worthy player on the losing team.

At the end of the post season, we will see who had the highest WOO total as a pitcher and a hitter.

A complete description of the rules can be found HERE.

Pedro Baez threw 1 1/3 key shutout innings, preventing the Braves from rallying and preserved the lead for the Dodgers as they clinched the Division Series in a 6-2 Game 4.

Nathan Eovaldi dominated the Yankees over 7 innings, allowing 5 hits and 1 garbage time run, to earn the easy 16-1 decision for the Red Sox.

Brock Holt hit the first ever post season cycle, homering in the 9th of Boston’s 16-1 humiliation of the Yankees.

Manny Machado went 2 for 5, homered and drove in 4, as the Dodgers came from behind to top Atlanta 6-2 and advance to the NLCS.

Collin McHugh threw 2 no hit shutout innings, striking out 4 Indians and walking none to earn the 11-3 victory for Houston.

George Springer got 3 hits and 2 homers to lead the Astros in a late charge to eliminate the Indians with an 11-3 final.

Mike Clevinger struck out 9 Astros over 5 innings, holding the champs to a single run. But the Indians bullpen and defense betrayed him in the 11-3 elimination loss.

Francisco Lindor hit a go ahead homer and added another hit. But the Indians could not hold off the champion Astros, 11-3.

Kurt Suzuki hit a 2 run pinch hit single that briefly gave the Braves the lead. They could not hold the Dodgers, who rallied for a 6-2 win.