How All Of The Rockies Hitters Were Acquired: 2014 Roster Tree – Injuries + A Coors Field Factor 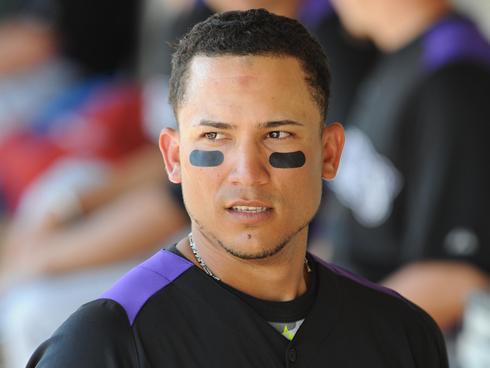 How All Of The Rockies Hitters Were Acquired:

The Rockies are one of the weirdest franchises around in the game of baseball today.

Thin air, humidors, pitcher who struggle, however where they are one of the most dynamic teams is in fantasy baseball.

I have said it before and will say it again…I would love to watch games at Coors Field 81 times a year.

For everyone that loves offense, then watching this squad bash the ball around is awesome. Unfortunately the hitters have had a tough problem staying healthy in recent years.

Carlos Gonzalez and Troy Tulowitzki are world class players.  Both would be in the running for NL MVP every year, it is just they can’t maintain in the lineup.

When you look at the roster, it is composed mostly of draft picks. END_OF_DOCUMENT_TOKEN_TO_BE_REPLACED

Comments Off on How All Of The Rockies Hitters Were Acquired: 2014 Roster Tree – Injuries + A Coors Field Factor

How All Of The Giants Hitters Were Acquired: 2014 Roster Tree

Buster Posey is a two-time champion that signed a contract extension with the NL Bay Area franchise, that will see him make $164 MIL from 2013 – 2021. Will he be able to play the duration of his contract as a backstopper – or will he eventually be moved to 1st Base?  The 27 Year Old was selected 5th overall by the team in the 2008 MLB Amateur Draft.

How All Of The Giants Hitters Were Acquired:

2010…..2012…. and will the fortunes of the Giants turn into another even year World Series Title in 2014 for the club?  Perhaps not, but their offensive lineup has been well manicured over the years.

For the most part, Brian Sabean has built this team from the ground up.  80% of the players like Buster Posey. Pablo Sandoval, Brandon Belt and Brandon Crawford were all drafted for the club.

All of the bench players were drafted or signed as Free Agents.

The biggest acquisition tree lies with the Hunter Pence deal, and now that he re-signed with the franchise last year through 2018, he has been paying immediate dividends on the investment.

In 2014 thus far, the brick-built OF, leads the NL in PA, AB and Runs Scored, and he has taken over the leadoff position for the injured Angel Pagan.

Speaking of Pagan, it is incredibly important the speedy OF is back in the lineup soon.  The Giants simply aren’t the same offense without him.

Pagan was brought in to the Giants in a 2011 December trade for Andres Torres and Ramon Ramirez.

When in the lineup, the 32 Year Old CF has been a threat with speed and power – as he has 103 Extra Base Hits in the 288 Games Played for the franchise.

Comments Off on How All Of The Giants Hitters Were Acquired: 2014 Roster Tree