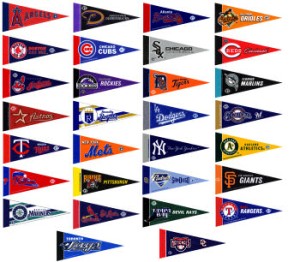 Disclaimer:  We based these rankings on best strength to win the World Series.  Therefore some teams that have an easier division to play in, with the least path of resistance to the postseason overall may be ranked a lot higher than a club who is equally talented, yet may play in a juggernaut of a division.

Yesterday won’t change much for the rankings.  Although it kicked off interleague with the Royals beating the Mets 4 – 3, and starts the Junior Circuit looking to win the AL vs NL competition for a 13th straight year.

Pittsburgh also beat the Cardinals.  I have them both ending the year win 91 victories, but these squad’s really intrigue me.

There are a multitude of reasons why I have picked the Cubs as the #1 team.  I explain them in the writeup.

Each Monday, we will post a new set of power rankings and go over the week that was. 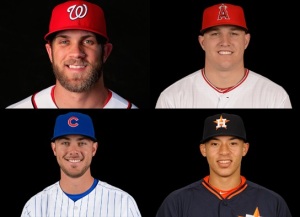 (1) Chicago Cubs:  This team is loaded with firepower.  The best part about the upcoming year is the depth in which to pull of more trades.  I feel  Theo Epstein is going to strengthen the Starting Pitching and late inning relief all season.

This franchise also has the wherewithal to reel in one of the three following aces – who are going to be hard pressed in playing on a contender in Sonny Gray, Jose Fernandez or Chris Sale.

Javier Baez, Jorge Soler, Billy McKinney, heck even a combination of Kyle Schwarber could be used to yield them one of these guys.

I believe in Joe Maddon.  I trust in Jon Lester.  Despite thinking Jake Arrieta will regress a little, he should still have a good enough year to retain ace status.

(2) KC Royals:  Keep hating on these guys at your own peril.  They friggin win every year, and I have personally made a lot of money on them over the last 3 years.  Kansas City has a pedigree that elevates their own talent.  The division is better yes, but the rest of them still have to hunt down the reigning champs.

(3) NY Mets:  Tough opening series with the Royals.  Having to witness yet another ceremony for the rings tomorrow would piss me off.  New York has so much pitching that they could be victorious every single day with their rotation.

(4) Houston Astros:  Carlos Correa is the real deal.  Jose Altuve is the quietest superstar there is (425 base hits in the last 2 seasons alone).  Power from everywhere, and now pitching with thunder in the Bullpen.  Don’t like the Luke Gregerson Closer nod over Ken Giles.  This is early though.

(5) Toronto Blue Jays:  Worlds of talent, and many players with contract years such as Jose Bautista and Edwin Encarnacion, coupled with the left side of the Infield being the best in the Majors courtesy of Josh Donaldson and Troy Tulowitzki.

(7) Washington Nationals:  Like the contact top 2 hitters with Ben Revere and Daniel Murphy.  Rookie talent headed their way with Lucas Giolito and Trea Turner on the horizon.  Easiest Division in the Majors.

(8) Pittsburgh Pirates:  Don’t sleep on the Bucs.  Quality pitching – coupled with a decent lineup of Batting Averages, and these Pirates may keep their stride in 2016.

(9) Texas Rangers:  Love the Ian Desmond pickup.  AL West is not the toughest Division either.  Yu Darvish could mean the difference of making the playoffs or not.

(10) St. Louis Cardinals:  Too many top players to recede that far down the rankings.  Being pitted versus Chicago and Pittsburgh will mean many challenges in 2016.

(11) Detroit Tigers:  Picked Miguel Cabrera for AL MVP this season.  Offense is scary, but so is Starting Pitching depth.  Anibal Sanchez has to stay healthy.  I believe in Jordan Zimmermann – and Justin Verlander can be effective as a 1A starter.

(12) Boston Red Sox:  Love the skipper going with Travis Shaw and Brock Holt for on o field play over Pablo Sandoval and Rusney Castillo and their contract status.

David Price and Craig Kimbrel are worth a bout a half-dozen win improvement already.  That AL East will beat each other up though, that is why they are outside the top 10 currently.

(13) Los Angeles Dodgers:  So many guys in the “meat wagon” for various ailments scares me.  We have said since the new management took over that they kept signing injury plagued players, and now it is hurting them.

Funny thing is, they also have guys like Scott Kazmir and Chase Utley on the Opening Day Roster, with both having a history of DL stints too.

(14) NY Yankees:  Shrugging off that they can get by without Aroldis Chapman for the 1st 30 Games is all fine, but they dealt away Left handed reliever Justin Wilson in the winter, who was very solid for them out of the pen.

(15) Cleveland Indians:  Hold on in April fellas.  Michael Brantley is close to coming back.  There may not be a more underrated player in the game right now.  Tribe has good pitching but a lot of power centric hitters, who are whiff kings, low batting average guys.

(16) Arizona Diamondbacks:  A.J. Pollock injury is devastating.  Your are talking about a potential MVP candidate here.  Tough sledding on the offense without him.

(17) Seattle Mariners:  Here is a club I am sure will head up the rankings chart soon.  I pegged them for the #1 AL spot – however I am going to make them earn their rankings as time goes on.

(19) Baltimore Orioles:  Hyun-Soo Kim refused his Minor League assignment.  Hopefully the club will give him a legitimate shot.  Love the lineup.  Starting Pitching is suspect.  Get ready for plenty of 7 – 6 games.

(20) Chicago White Sox:  Just happy to not have heard that much about Adam LaRoche now that the season has started.  This club will have a tough time keying enough base hits when they need them.  Chris Sale needs to avoid his slow start in April (that eventually ends with a dead arm – DL Stint)

(21) Tampa Bay Rays:  just hit the search engine on this site to see my views on this club.  I am not buying they are light years ahead of everyone with their rotation.

Also with the injury to Brad Boxberger, this club is a lot weaker in 2016 – than they were in 2015.  Have sacrificed a lot of Batting Average guys for potential power in the daily lineup

(23) Los Angeles Angels:  Jered Weaver can’t hit 85 MPH. C.J. Wilson hurt is horrible for this franchise.  Both make over $20 MIL this season. have become untradeable – so it is the diminishing law of returns.  75 wins here we come.

(24) Oakland A’s:  Will Billy Beane actually hold onto Sonny Gray for the duration the year?  Maybe…But his recent trend is not to pay any ALL – Star guys even in Arbitration.  No way Gray is in Oakland beyond 2017.  Hopefully the veterans play well enough to keep up trade value.

(25) Colorado Rockies:  Going to the philosophy that had them win in 2007.  Strong Bullpen and good offense.  This club has to see an improvement with the rotation before they can even shake 90 losses this season.

(26) SD Padres:  Starting Pitching is the only factor to save this club from the 100 loss plateau.

(27)  Philadelphia Phillies:  They are ahead of all of these bottom 6 for a quicker rebuild. 2016 could be good without them winning that many games at all.

(29) Cincinnati Reds:  Opening Day should have the best cheers.

(30) Milwaukee Brewers:  Ryan Braun and Jonathan Lucroy need to up their trade value.  They are handing out free tickets on car windshields in parking lots?  Really?  They still drew 2.5 Million fans last year in a horrendous campaign.  Fanbase is solid.