Seeing on how many points Tanner Roark acquired vs the Twins on Saturday (66 PTS on 15 SO and 7 IP,) I am confident on Stephen Strasburg dominating the Twinkies on Sunday.  Yes the price is high, but this is Sunday. so there are some cheap options to replace your roster.

Since I am having Bryce Harper in any lineup also right now, I took 3 cost effective Mariners to help me bring the price down.  With Righty Matt Shoemaker toeing the hill for the Halo’s, I have Adam Lind, Seth Smith and Nori Aoki in my lineup.

Lind is starting to heat up after a brutal start ( 3 straight multihit games), and holds an .859 OPS career vs RHP.  Smith is equally as good, with an .839 OPS vs RHP.  Call it a hunch. but these guys are due to break out.  Shoemaker served up 24 gopher balls in 135 IP last season, and has served up 3 more in 16 IP this season

I went with hot hitting Yan Gomes as my Catcher.  Dude raked on Saturday.  If they don’t play him make sure you switch him out with Chris Iannetta (or anyone else in the $2400 to $2600 range)

Chris Coghlan is also a nice move in case of an OF being sat in Seattle.

Jed Lowrie is also a decent value play at $2400, as he has hit .409 in the past week and is opposing Drew Hutchison on Sunday.

The play here is for Strasburg to be the #1 pitcher by far Sunday. and then hope to have the lineup just all contribute.

END_OF_DOCUMENT_TOKEN_TO_BE_REPLACED

P – Jared Eickhoff (vs. Milwaukee Brewers): $8,500. Eickhoff has been a stud all year long. He is averaging 22.9 points on Draft Kings this season. In his first 3 starts, he has thrown 19 innings, 1.89 ERA, 21 strikeouts, and only 5 walks. He will be facing the Brewer’s offense, which is nothing special.

Through the first few weeks of the season, the Brewers are ranked as the 29th best offense… that’s bad. They also strikeout the third most (156 total strikeouts) in the Major Leagues, which is great for a strikeout-pitcher such as Eickhoff.

P – Aaron Blair (vs. New York Mets): $6,800. I’m going out on a limb here, but I love Blair in this match-up. He is making his Major League debut and he is playing in his home stadium. The crowd will be behind him and he will be pumped up.

The Mets offense has struggled all year long, so this could be a good first taste of the big leagues for Blair. In Blair’s minor league career, he is averaging 8.3 strikeouts per 9 innings, with a 3.13 ERA. This start could backfire considering no one knows how Blair will fair in the bigs, but at only $6,800, it won’t hurt too badly.

To see the rest of the picks, click the link below: 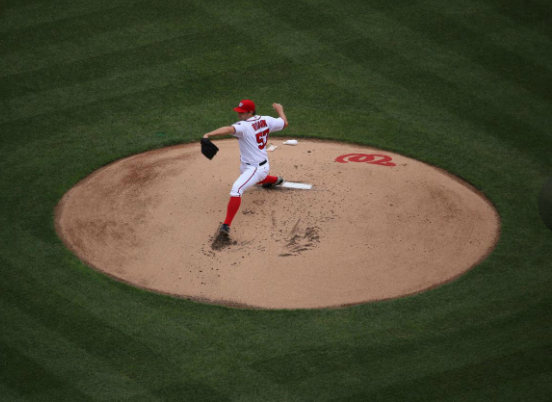 Tanner Roark struck out 15 Twins over 7 innings of 2 hit shutout ball and earned the 2-0 decision for Washington.

Corey Kluber got his first victory of the season with a decisive 8 innings, 2 hit, 1 run and 10 strikeout performance as the Indians rolled in Detroit, 10-1.

Odubel Herrera reached base 5 times, homered, scored 4 runs, drove in 2 and stole a pair of bases and helped Philadelphia win a wild one in Milwaukee, 10-6.

END_OF_DOCUMENT_TOKEN_TO_BE_REPLACED

Miami Marlins are in San Francisco which means Barry Bonds has come back. We missed a chance for a really dramatic moment.

It is a “You can come home again” episode of The Sully Baseball Daily Podcast.

See the updated listing of WOB on MLB Reports