Since everyone else was making their predictions for the upcoming seasons, I am throwing down my picks too.  But first there are some categories to rifle through 1st.

END_OF_DOCUMENT_TOKEN_TO_BE_REPLACED

More Tommy John Surgeries By The Numbers + Who Is the 1st $100 MIL Pitcher To Go Down With It? + A Scherzer Angle? 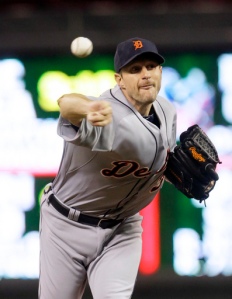 Yes Max Scherzer wrapped up the AL Cy Young with a most impressive season in 2013, but with TJ surgery becoming so common place with today’s chuckers, who would want to risk that kind of jack for a pitcher one throw way from being sidelined for 12 – 14 months?  In my view it was a mistake not to accept the $$.

I think Max Scherzer should have taken the contract offer the Tigers threw his way this past weekend.  Reports say it was in the Cole Hamels and Zack Greinke range of 6 YRs/$144 – $147 MIL.

So now that the reigning AL Cy Young Winner didn’t take the deal, he must hope to replicate his 2013 campaign, or at least come some where near it.

Do I think he could make more on the open market, potentially yes.  But for a guy who has never been under a 3 ERA in any one given year, that is a tall order.

Also keep in mind his arm could sideline him with an injury at any point, so there is an inherent risk to not taking the deal.

One of out every 3 Major League Pitchers will go undergo Tommy John Surgery.

If you don’t think this procedure is an epidemic, go follow our ALL – Time TJ Surgery Tracker here.

END_OF_DOCUMENT_TOKEN_TO_BE_REPLACED

I make a plea to the Houston Astros, one that I have been making for a few years now:

There is now a Facebook page for the purpose of getting the Astros attention. Click HERE to see it.