After the San Francisco Giants signed one of the elite premier closers in the game Mark Melancon, they had to figure out who would be the odd man out on the 40-man roster. The Giants decided that they would be willing to part ways with pitcher Chris Heston. Let’s not forget that Heston tossed a no-hitter for the Giants a little over a year ago. Which is probably why they were able to trade him last night to the Seattle Mariners for a “Player to be Named Later”.

Posted in BBBA Featured Writers, The Rest: Everything Baseball

Comments Off on Giants Trade Chris Heston to the Mariners 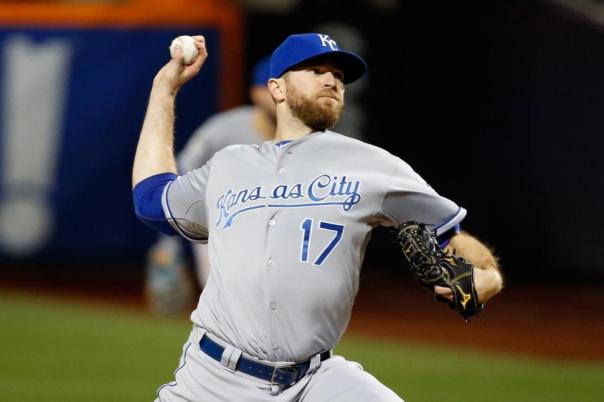 Wade Davis has been one of the filthiest late inning Relievers in the game over last three years, and only comes with a salary for one year at $10 MIL.  Chicago is really smart for doing this as Aroldis Chapman cost the Yankees $86 MIL for 5 years yesterday, and Kenley Jansen is not far behind.  he Cubs may also give Davis a Qualifying Offer after next season is over.  Who knows, maybe he would accept a one year deal at $18 MIL to stay on this World Series Contender.  The most important factor in landing Davis is his playoff pedigree.  He has proved he is an elite Closer on the grandest of stages – something that Chicago plans to be involved in again to defend their championship.

With the news that the Cubs brought in Wade Davis in exchange for Jorge Soler, the Cubs have effectively brought in a 9th Inning Man – who won the World Series for the Royals in 2015 as their stopper.

Davis will earn $10 MIL in 2017, and can may be extended the Qualifying Offer for 2018 in the process.  With another spike potentially in the top 125 salaries (this years total was $17.2 MIL) maybe Davis would take the one year deal for 2018 after this next season.

As one of the game’s premiere Late Inning arms since the 2014 season, Davis is also a perfect replacement for the departing Aroldis Chapman.

With a team that has a World Series under its belt, they just added a Pitcher with a 4 – 0 record, with a 0.84 ERA and 0.959 WHIP in 32 Innings worth of work – spanning the 2014 and 2015 World Series trip for Kansas City. He has performed at the optimal level – under the most pressure. END_OF_DOCUMENT_TOKEN_TO_BE_REPLACED

Comments Off on Cubs Acquire Closer Wade Davis: It’s A Smarter Maneuver Than You Think

The Nats Pay A Steep Price For Eaton: The New CF Has A Team Friendly 5 Year Deal Which Is The Key To Salvage The Trade

Mike Rizzo is getting scorched for the fact he gave up the #3 and #38 top MLB Pipeline Prospects.  Throw in their #6 prospect – and you can see how people have said the Nats GM orchestrated a bad deal.  I am not one of those people.  This was a move that is more financial based than even the young players.  If Washington is still able to get a top line Closer, and add several more pieces, while dancing around the Luxury Tax Threshold of $195 MIL – I am down with this trade if they re-spend the cash on another Starter that is MLB ready this season.

For the majority of the last week we heard the Nationals were trying to land Andrew McCutchen in a trade, but they shocked the world on Wednesday by acquiring CF Adam Eaton from the White Sox in exchange for three RHP (Lucas Giolito, Reynaldo Lopez and Dane Dunning).

These three guys represent the club’s #1, #3 and #6 prospects.  Giolito was ranked #3 overall and Lopez #38 by MLBPipeline.com

This seems like a lot for just one player – but you have to look at several factors here.

Mike Rizzo landed a player that just turned 28 a few years ago.. He is the leadoff guy the team has needed ever since the departure of Denard Span.  This is so critical when you consider the Nats will likely only have Bryce Harper for the next 2 years. END_OF_DOCUMENT_TOKEN_TO_BE_REPLACED

Comments Off on The Nats Pay A Steep Price For Eaton: The New CF Has A Team Friendly 5 Year Deal Which Is The Key To Salvage The Trade

The Cubs brought in Wade Davis, who will be the closer for the defending World Champions for the second straight year.

If he clinches a post season series in Chicago, he will join a select fraternity in terms pitchers for 2 different franchises.

Slam the door on this episode of The Sully Baseball Daily Podcast.