Atlanta Braves State Of The Union For 2016

Before the recent deal for Shelby Miller the Braves had been questioned on whether the rebuild they are currently going through was going to work. Now all of a sudden, the club going through trading of all veterans – starting with Jason Heyward a year ago, looks so much better. The next year or 2 is still going to be painstakingly to endure, but the organization now has a promising future.  Atlanta will enter a new park in Sun Trust Park, located in Cobb County, GA for 2017 after playing one more year at Turner Field in 2016.

John Hart knows how to build teams in the Majors.  He was at the forefront of the Cleveland Indians in the 1990’s when they signed a bunch of young nucleus players to multi year extensions.  It was a trend that worked out for nearly a decade.

A pile of organizations copied this template.  I must admit I thought he may have been a bit past his prime when the Braves finally hired him on last year,  but he seems to carrying out the mission with Atlanta as well.

Of course taking over for Frank Wren – there was not much to go but up.  Dan Uggla, Derek Lowe and B.J. Upton ultimately cost the former GM his job, but it should be noted he did orchestrate 3 decent trades in acquiring  Justin Upton, Michael Bourn and Javier Vasquez much earlier.

The Braves did the right thing in dismantling the 2013 to 2014 squad.  It would have cost too much money to re-sign Brian McCann and Jason Heyward – and Justin Upton may soon reel in a 9 figure sum.

Atlanta also traded away Craig Kimbrel and Andrelton of late.  The haul for Kimbrel was nice, while Simmons was set to make $53 MIL over 5 years. Not huge cash, but for a guy more noted for defense, and with a team rebuilding, losing the dollars owed was a more significant move.

I also can’t emphasize enough how awesome it was to rid themselves of the Melvin Upton JR. contract.

The Braves GM John Hart has traded the entire OF, shed payroll, and tried to stockpile the Minor Leagues with a boatload of prospects over the last  14 month. The transformation has been swift and just.  This doesn’t mean the club wont struggle in the next year or 2.  Look for them to challenge for the worst record in the MLB in 2016.

There is no doubt the recent haul they received for Shelby Miller has convinced the Braves fans that good times may just be around the corner.  They are truly building something decent for the start of the new stadium in Cobb County next year.

Provided the coaches don’t have a braincramp, the talents of Michael Bourn and Nick Swisher will also come off the books at the end of 2016.  There is only $52 MIL committed on the books for next year in this event.  Lots of money to play around with in spending.

In the Miller deal, they added a nice piece in Ender Inciarte to the OF mix.  He has 5 years left of team control, and capped off s sophomore year with a decent .747 OPS.

Dansby Swanson is from Georgia, and may provide the club with its Shortstop of the future, and he is originally from Georgia.  It is awesome to have a hometown boy in a city like Atlanta – where attendance can be heavily influenced by year to year.

Aaron Blair, the other player picked up in the deal, may also be ready for a rotation spot on the Pitching Staff by next campaign.

Tyrell Jenkins, also picked up originally from the Cardinals in the deal to acquire Heyward, may see some time with the 2016 Braves too, buy could potentially hit the Starting Staff by 2017.

Speaking of trades that help the team in the future.  Matt Wisler, (acquired in the deal for Kimbrel by the Padres), projects to be the #2 starter for Atlanta in the coming year.

There was simply no way the club should have kept Kimbrel when you are not expected to contend.  He still had $53 MIL left on his deal over 4 years.  it may take that long for Atlanta to be competitive once again.

It is funny how the dominoes fall, as Cameron Maybin, also acquired in that deal, was flipped to the Tigers for Gabe Speier (added with Miller for the returning package) and Ian Krol.

Atlanta also received a competitive A balance pick and Minor Leaguer Jordan Paroubeck in the Kimbrel deal.  Adding Melvin Upton JR. in that deal was a huge boon to the financial resources.

The Catchers of the club in 2016 will be Tyler Flowers and A.J. Pierzynski.  The two both worked in Chicago a few years ago for the White Sox. Flowers was signed for 2 years, and will have a chance to be with the club beyond 2016, at least for one more year.

Pierzynski hit .300 last year – in 407 AB, and has been an offensive stalwart as a backstopper for years. The 38 year old may even be traded at the deadline next year for a club looking to add depth. His 1978 Games Played in could be valuable to an extremely young Pitching Staff.

Certainly the club adding Erick Aybar for a one year stop-gap in the Simmons deal was not enough for the long – term.  However freeing up $40 MIL aggregate in the process may prove to be cerebral.

Aybar is in Atlanta for 2016 before becoming a Free Agent.  He could just be place holding for a year before Dansby Swanson may come up to the club to man the position.

Atlanta also dumped as much payroll as the possibly could with jettisoning Bronson Arroyo, Jim Johnson, Luis Avilan and Alex Wood for another competitive balance pick. Paco Rodriguez and Hector Olivera.

The Bullpen will have some Veterans Arodys Vizcaino, Jason Grilli, Jim Johnson (newly re-signed once again), however the rest of the Relief Core struggled.  Most of them had ERA’s north of 4.

Despite all of the early hot stove talk on Freddie Freeman, (he is signed to a decent sum of cash at 6 YRs/$118 MIL left on his extension), the organization could retain his services – and he could spearhead the rebuilding process with a core piece.

The staff is still anchored by Julio Teheran.  He will just be 25 years old next year, and he is under team control until 2020.  This bodes well for them to have a Starter for the next 5 campaigns.  Teheran will earn just $28.6 MIL in that time frame.

Mike Foltynewicz was the main piece the franchise brought back in the Evan Gattis deal.  He could be the potential swingman for both the rotation and Bullpen.

Ryan Weber and Williams Perez are draft picks by the club that could compete for Starting gigs in the 2016 year.

Crazily enough the squad this year will have a payroll nearing the $100 MIL mark, but that has more to do with the Swisher and Bourn deals being added as placeholders for one year.  These guys are anemic offensive threats now – and may not see starting duties in 2016.

The Braves will surely lose way above 90 games in 2016 – and I project them to be near 100 before the year is out.  Any veteran with any success should be traded halfway through the year.  Atlanta should have a tough year in attendance at Turner Field this upcoming season. 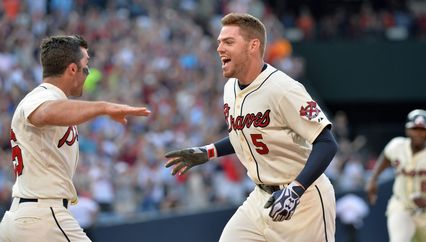 Freddie Freeman will be the only real veteran of the old guard and new one when the club enters the new park. He has 6 YRs/$118 MIL left on his current contract, and that is not bad value for a First Baseman with his production.  Freeman, who will just enter his Age 26 year in 2016, slashed for a .276/.370/.471 line last year – which is pretty close to his career numbers.

← Toronto Should Trade For Ryan Braun
Milwaukee Brewers State Of The Union For 2016 →
Loading Comments...