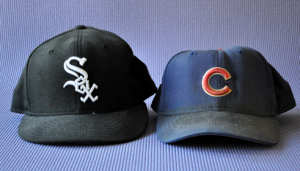 Today The Sully Baseball Daily Podcast looks at Chicago… a big market city that certainly isn’t acting like one with their baseball teams.

Both stink. The White Sox have hope. The Cubs have a long term rebuilding… REALLY long term.

Peter Bourjos was moved into CF – and the LA Angels then shifted Mike Trout over to LF, based on the range of Bourjos as an OF. He is fast, and has shown that he can be a catalyst in a lineup. His best year was in 2011, where he played a full season, 3 Slashing .271/.327/.765 – with 12 HRs, an AL leading 11 – 3B, 26 – 2B – and added 32 SB. The Cardinals will have him patrol CF with them in St. Louis. Bourjos has 3 years left of Arbitration, while Freese only has 2 years left. The Angels also swapped their top OF prospect in the deal – for help in Reliever (but trending down) Fernando Salas.

It is funny how the complexion of a team can change with one deal.  For right now, I want to be on record as saying I hate the deal that the Angels made yesterday for David Freese.

The deal came down to Peter Bourjos being sent to St. Louis with Randal Gruchuk (or Grichuck as baseballreference.com lists him as –  for David Freese and Reliever Fernando Salas.)

I had thought all along (same with this website) that these two clubs should be trading partners.

But we were thinking of a heavy deal containing Mark Trumbo and Erick Aybar, for potentially Matt Adams, David Freese and/or a Starting Pitcher from the bountiful nest of the Cardinals Staff.

Peter Bourjos Inside The Park HR

END_OF_DOCUMENT_TOKEN_TO_BE_REPLACED

Posted in MLB Teams State Of the Unions, MLB Teams: Articles and Analysis, The Rest: Everything Baseball