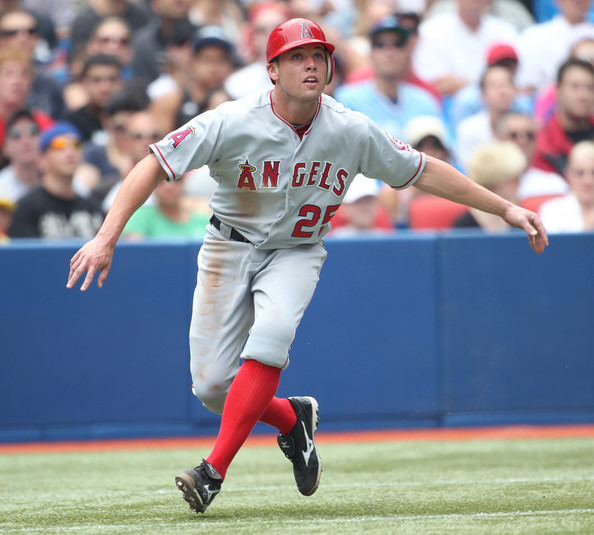 Peter Bourjos was moved into CF – and the LA Angels then shifted Mike Trout over to LF, based on the range of Bourjos as an OF. He is fast, and has shown that he can be a catalyst in a lineup. His best year was in 2011, where he played a full season, 3 Slashing .271/.327/.765 – with 12 HRs, an AL leading 11 – 3B, 26 – 2B – and added 32 SB. The Cardinals will have him patrol CF with them in St. Louis. Bourjos has 3 years left of Arbitration, while Freese only has 2 years left. The Angels also swapped their top OF prospect in the deal – for help in Reliever (but trending down) Fernando Salas.

It is funny how the complexion of a team can change with one deal.  For right now, I want to be on record as saying I hate the deal that the Angels made yesterday for David Freese.

The deal came down to Peter Bourjos being sent to St. Louis with Randal Gruchuk (or Grichuck as baseballreference.com lists him as –  for David Freese and Reliever Fernando Salas.)

I had thought all along (same with this website) that these two clubs should be trading partners.

But we were thinking of a heavy deal containing Mark Trumbo and Erick Aybar, for potentially Matt Adams, David Freese and/or a Starting Pitcher from the bountiful nest of the Cardinals Staff.

Peter Bourjos Inside The Park HR

David Freese has experienced a lot of ups and downs with the Cardinals. From being the 2011 WS MVP, to barely being able to keep himself on the field healthwise. 2013 represented the 31 Year Old’s worst year in the bigs, with just 9 HRs and a career low .721 OPS in 462 AB. For his 5 year career, he has put forth a .286/.356/.783 slash Line. The Angels will need something more along those lines to compete in 2013. The trade still left them exposed in the OF, and I think it was a poor decision for the organization – but not so much for the player. I would have rather seen them sign a FA 3B.

The Angels, who are not stocked with a plethora of young OF talent, served up Peter Bourjos, and another OF prospect in Grichuck – for an oft injured 3B, and a Reliever that is trending the wrong way.

I am not saying that Bourjos hasn’t had his own personal health issues, however if he is healthy, he can play a Gold Glove caliber level in CF, and he is a little speed demon on the bases.

The Angels did have a pressing need for a 3B out there, but why wouldn’t have they opted for a Free Agent signing like a Mark Reynolds – or even better a guy like Jhonny Peralta, who could play SS/3B or maybe LF?

Instead, they traded away depth at OF, and now have made it impossible to trade away Mark Trumbo without receiving an OF back in return as part of the trade.

The Angels are counting too heavily on Albert Pujols playing healthy at 1B.  When you factor in Josh Hamilton has had issues playing every day in the field in his best of years, picking from their depth was not wise.

I mean this has a recipe for a disaster all over it.  There maybe a huge waiting list at the trainers table for the whole 2014 campaign. 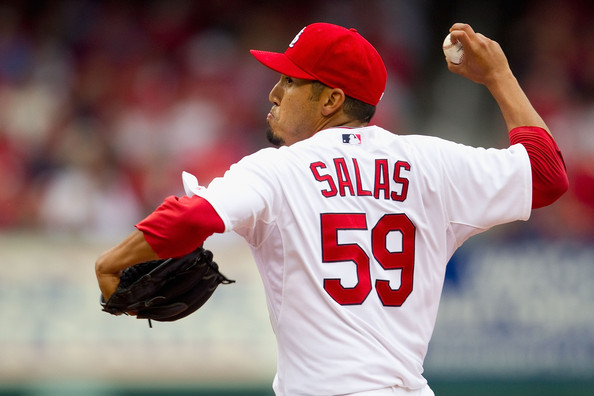 Fernando Salas threw exceptionally well for the 2011 World Series Champs, staking up a 2.28 ERA in 75 Innings logged, however he has regressed with a 4.30 ERA in 2012, and had a 4.50 ERA in 2013. With all of the young chuckers that St. Louis had, it was simple to trade Salas as he would have been caught up in a numbers game. Anaheim on the other hand, has a crappy Bullpen, and the 28 Year old from Mexico native will be given every opportunity to make the Relief Core in 2014.

The AL Los Angeles club thought so much of Bourjos in CF last year, that they moved their all world talent Mike Trout over to LF in order to accommodate it.

Not only do you lose an awesome defender, he was one of the guys in your lineup to steal bases.  The Angels are now faced with Pujols, Freese and Trumbo all clogging up the basepaths when they are on.

Los Angeles needs 2 or 3 Staring Pitchers, a bevy of Relief Pitchers, and now based on this deal, you may even have to add another OF to the list you already possess.

The Cardinals win this deal unless David Freese can play better than he ever has in his career.

By St. Louis picking up Bourjos, they improved their team speed, defense, Stolen Bases, and it also frees up the club to play Matt Carpenter at 3B for the departing Freese.

Kolten Wong could now potentially challenge for the 2B position, Matt Adams could play 1B, Allen Craig RF, Bourjos in CF and Matt Holliday plays LF.

The club could still make another move for a Shortstop, and you could still draw from your multitude of Starting Pitchers, and also Oscar Taveras could be made available.

The Redbirds also have Bourjos for one more year of Team Control. as he will be with the club through 2017, whereas Freese would have been a Free Agent in 2016.

Logically, it also frees up money in salary – as David Freese made over $3 MIL in 2013, and while his numbers are down from his career marks, he will likely be given a raise in Arbitration.

The Cardinals will now have a dynamic on their offense that they didn’t possess in 2013.  If Wong ends up playing 2B, then you have added speed guys, by way of the trade.

Grichuck was listed as the Angels top OF prospect – and their 5th best young player out of their MiLB affiliates.

The trade opens up many more scenarios for the Cardinals, as they still have so many young arms, plus Oscar Taveras and Jon Jay to move in order to shore up other small deficiencies.

I like the club to eventually pull off a trade for Asdrubal Cabrera, because the Cards need at least an average SS on offense and defense.

I wouldn’t put it past them to sign a quality 2B Veteran like Mark Ellis or Kelly Johnson on short term deal either, to give the club an option of letting Wong season more in the Minor Leagues.

You could potentially have 6 guys rack up near 900 SO from just those pieces set in the lineup.

Your team is slower, your defense is worse, your OF depth is not the same as it was heading into yesterday, you did not pick up a Starting Pitcher in return, and your relief core is not better by adding Salas.

The next sentence does not apply to Mike Trout: Your lineup contains a bunch of free swinging Strike-Out artists, who may have all had their best Careers in the Majors.

Oh yeah..vying for your 4th and 5th OF slots  in your depth chart  (from the MLB and MilB) are now (J.B. Shuck, Matt Young, Andrew Heid, Robbie Widlansky, Scott Cousins, Cyle Hankerd and Ryan Jones – all of whom do not have great MLB resume’s (or have not made their debut) at all.

Collin Cowgill certainly is not the answer either.  So yeah, your team needs to bring in another OF via Free Agency right now.

The club needs a DH still as well…Did I mention this team already has over $130 MIL in player salaries already?  The squad also has about 90%  of the important players over the age of 30.

The lineup features a bunch of Right Handed Batters.  Other than Erick Aybar (Switch hitter) and Josh Hamilton who hits left.  This is being said without any player being listed for DH status right now.

Jerry DiPoto should be on full blast for his job.

It simply keeps going from bad to worse.

Jason Vargas, an underrated thrower in the American League the last several seasons, including last year with LAA as their #4, signed a nice 4 YR/$32 MIL with the KC Royals, and the Angels could not have retained him because they are still on the hook for Kentucky Joe Blanton‘s $8 MIL contract this year.

The Angels are not winning because Albert Pujols and Josh Hamilton are not hitting to the back of their bubblegum cards, and Jered Weaver spent half this year hurt. You throw in the brutal Free Agent Signings of Joe Blanton and Ryan Madson and you start seeing the point. The Angels are not off to such a hot winter during this November either. If the team continues to trend in the wrong direction, it could cost a lot of people their jobs. The Angels finished 78 – 84 in a cupcake AL West – that featured the Astros and Mariners representing almost 25% of their schedule.  Bringing in Freese can’t be the only move, but Arte Moreno is going to have to look back into the pocketbook for the rest of his acquisitions as the Majors and Minor Leagues are just not giving them anything to use.

A big thank-you goes out to Our ‘Chief Writer‘ Hunter Stokes for preparing today’s featured article.  Hunter is a Baseball Writer for MLB reports.

Hunter grew up in Lynchburg, Virginia and played baseball with Sheldon Bream (Sid Bream‘s son) at Liberty University in the NCAA.

His favorite player is Brian Wilson (how could you guess?), and he hates when people can’t think outside the box!

His favorite expression – is ‘ this At Bat is about ten seconds away from a Toe – Tag!