The Triple Play Show will have 2 shows per month. Each show will be about 1 hour. Chuck Booth will guest once a month for MLB  Reports Power Rankings,

New York, New York big city of dreams where not everything is as it seems, so we had Mike Silva (http://www.mikesilvamedia.com)of WGBB1240 AM break down the Mets and a bit of the Yankees + our new Mt .Flushmore segment. END_OF_DOCUMENT_TOKEN_TO_BE_REPLACED

The Mets have arguably the best young right-handed pitcher in baseball. He is the ace of their starting rotation, and has a chance to be their best pitcher for a long time. Harvey has seven wins on the season with a 2.35 ERA with 147 strike outs in 130 innings pitched and a WHIP of 0.91. He has a SO/9 of 10.2 and has only surrendered seven Home runs. He is holding the opposition to a .196 average, while holding left-handed batters to a .175 average. He is especially good with runners in scoring position, as teams just hit .231 in this situation.

The New York Mets are fourth in the National League East division going into the All-Star break and that won’t change in the second half of the season for this club.

The teams that are ahead of them in their division are more adept at scoring runs, and have better starting rotations. The second part could change with two young arms already in the rotation with Harvey and Wheeler.

END_OF_DOCUMENT_TOKEN_TO_BE_REPLACED

New York, New York big city of dreams where not everything is as it seems, so we had Mike Silva of WGBB1240 AM and James Acevedo of the Bench Warmers and 2 and a Hook podcasts come on and break down the Mets and Yankees.Mt Rushmore, BetHubb.com best bets and Blue Jays talk too. Another Home Run show! END_OF_DOCUMENT_TOKEN_TO_BE_REPLACED

MLB reports and The Benchwarmers Show present 2 and A Hook Podcast.

‘2 And A Hook’ is an expression from Baseball:  ‘Throw the guy 2 Fast balls and then a Hook’ (AKA Curve Ball, Wiggly one, Chair etc..)

People in this Podcast:

On today’s show, brought to you by MLB Reports (www.mlbreports.com) & The Bench Warmers Show (thebenchwarmers.podomatic.com), I started by paying respects to a follower of mine on twitter (the great late Kiley)   Follow @jeterfan_02 who passed away last week…not only she was a great Yankee fan who loved Derek Jeter – but also was the most sweetest giving person ever, R.I.P….

I start to talk about the Subway Series then I interviewed my first guest Derek Jackson (10 Minute Mark  – 20 Minute Segment.  Follow @djaxmlbreports who is a fantasy expert for MLB Reports! We talked about which callups to watch midway through the season,a look at the rookie crop of players & second year players…check out his latest fantasy article here END_OF_DOCUMENT_TOKEN_TO_BE_REPLACED

Comments Off on 2 And A Hook Podcast Episode #6: Fantasy, Phillies And Rangers Expert Interviews + Notes

Forever A Met: David Wright And The Quest For Franchise King Status 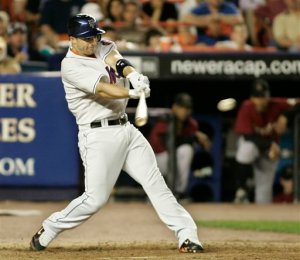 Met fans have gotten used to having their greatest players come either from other franchises or move on to other franchises. When combing through the 50-year history of the Mets, you realize that every great player this franchise has had didn’t spend their entire career in Flushing. Tom Seaver, Jerry Koosman, Cleon Jones, Darryl Strawberry, Dwight Gooden, Gary Carter, Keith Hernandez, David Cone, Mike Piazza, Al Leiter and Jose Reyes were all either products of other franchises or homegrown talent that was eventually let go.

Met fans can now say that they have a player who’ll more than likely remain with the franchise for his entire career. END_OF_DOCUMENT_TOKEN_TO_BE_REPLACED

Jake Dal Porto: If there’s one compelling story that will represent the 2012 MLB season, it’s R.A Dickey’s story. At first, he was your normal fastball based type pitcher, but after finding minimal success with the normal approach, he switched gears and became one of the few knuckleballers in baseball. And the approach has worked. Now, the question that the Mets are facing is whether or not they extend him seeing that he can test open waters once the season concludes. Although, Dickey peaked at a much older age than most pitchers, as he’s currently 37 years-old.

What is he worth?

Dickey isn’t going to receive a massive contract considering his age and the knuckleball approach. Although, an annual salary of $8-10 million isn’t out of the question. Perhaps he signs a deal worth even more. However, the length of the contract isn’t going to push more than four years. Even a four-year extension could be too long for Dickey who will be 40 in nearly three years. END_OF_DOCUMENT_TOKEN_TO_BE_REPLACED