New York Yankees State Of The Union For 2017: Stemming The Tide For Upcoming Seasons

The Yankees shocked the baseball world by contending for the last 2 months in 2016 after dealing away Aroldis Chapman, Andrew Miller and Carlos Beltran at the Deadline. With a the young ‘”Baby Bombers” on the way, tt will take a few good veterans to compliment the talent in order for the Yankees to become extremely dangerous once again. It all starts with the GM Brian Cashman.

I will be the first one to give credit to Brian Cashman for arranging the July Trade Deadline deal moves to free up a rebuild on the fly.  The Yankees rewarded their longterm GM by continuing their season streak of over .500 to 22 years.

The management has also been fortunate that Gary Sanchez fared so incredibly well – so they could sell Brian McCann to the Astros, and effectively free up another $10 MIL into their couch cushions.

As it sits right now the clubs projected roster is looking to be in the $167 MIL range for total team salary.  Unfortunately they are still on the hook to CC Sabathia for $25 MIL and Alex Rodriguez for $21 MIL in 2017. even though latter is not even on the roster anymore.

So what do the Yanks do this winter?  They are perennial abusers of the Salary Tax Threshold, and have been paying 50% of their dollars spent beyond the limit for the last several years.

With the news of talks proceeding on that number potentially reaching $200 MIL or under the new CBA, the Pinstripers should definitely dole out some bread for Free Agents this offseason.

I would say that for the Bronx Bombers to be competitive for the AL East, they need to add at least $50 MIL in players salaries this winter in order to fight the Jays and Red Sox for the Division.

Gary Sanchez is the most important player in this rebuild process. It is unfathomable to think he can carry the same electric offense pace he carried forth in 2017 (20 HRs in just 53 Games), but it is not too far fetched for him to be the best hitting Catcher in the American League for the next handful of years. and lead the Bronx Bombers back to the elite status in the playoffs.  It would be awesome if the brass could supplement the lineup with a big proven bat to hit in the #4 slot ahead of Sanchez for the foreseeable future.

At Catcher they are completely fine with Sanchez providing a thunderous stick for an entry level deal.  There is also nothing wrong with the double play tandem of Didi Gregorius and Starlin Castro.

First base looks to be Greg Bird coming back from injury. and you also have Tyler Austin who could take some innings there, and provided some pop in the last 2 months of the 2016 year.

Designated Hitter is another situation altogether.  I for one. would not sign Carlos Beltran back if he costs more than $12 MIL -and definitely not longer than 1 year.

I think better candidates would be to sign either Adam Lind. Chris Carter or Pedro Alvarez to no more than about $8 or $9 MIL.  Having the ability to play 1B is also a good move there.

For the hot corner. Chase Headley has not lived up to potential, and you could possibly deal him away if the club were to eat some cash on the remainder of his deal, however I also think he could still provide average numbers across the board.

The OF really needs some help in going forward.  I would call the New York Mets to see if they were willing to do a deal with Curtis Granderson for Brett Gardner.

With Jacoby Ellsbury being too similar of a player to Gardner, and also him being owed $36.5 MIL over the next 3 years, this would free up some cash over the duration of the deal.

I happen to think Granderson would still thrive at Yankee Stadium playing LF, and Gardner would give the Mets the true CF they need.

I have seen enough of the Gardner/Ellsbury top of the lineup mix to think it will not work. Since Ellsbury is not tradeable with his contract, Gardner would be a viable option.

Aroldis Chapman is on pace to be one of the best ALL – Time Closers in the game. Toting a Career ERA of 2.08 – and a incredible 15.2/Per 9 IP SO rate, this man is about as hard to hit as they come. At entering the 2017 season at just Age 28, I would have no qualms about inking this man to a 6 year deal – worth anywhere from $90 – $100 MIL.  The more years the Yankees lock this man up the better.  He will help a developing rotation save innings, while also putting Betances and Clippard back to more familiar roles in 2017 at least.

The biggest name on the Yankees list has to be Aroldis Chapman.  At $16- $17 MIL a year – the Yankees should not even bat an eye – and sign the man for 5 or 6 years.  Combined with Dellin Betances, New York eill really be able to shorten games.

Masahiro Tanaka will still spearhead the rotation for 2017. and Michael Pineda/CC Sabathia/Luis Cessa and Luis Severino are on the Depth Chart for now.

i think it is a no brainer to earmark Rich Hill for this Staff.  The Yankees can offer good money, and even potentially run a 6 man rotation if need be.

I would not pay any other top Free Agent Pitchers to come to the Bronx.

If they are willing to trade a plethora of young talent. the Yankees may also pursue the likes of Chris Sale and Sonny Gray via the trade route as an alternative.

I would have said Chris Archer or Jake Odorizzi too, but I would not think that would be an option with the Rays residing in the same Division.

The biggest need for an upgrade has to come in the 1B/RF and DH area. 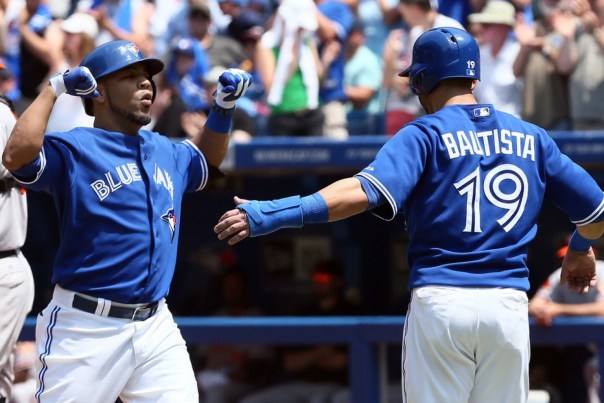 Edwin Encarnacion or Jose Bautista signing with the Yankees would kill two birds with one stone. It would prop up the squad while deflating the Jays in the same division.  Considering the team needs, either of them could simply DH, but also provide a nice back up option in the field with Aaron Judge in RF for Bautista, and Greg Bird/Tyler Austin at 1B for EE.  Bautista would be better on a short term deal, as opposed to EE taking at least four year to sign in all likelihood.

If the club wants to go on the cheap to fill out DH, I think that a deal for Logan Morrison or would be okay for a one year pact in the $5 or $6 MIL range.

The club should definitely do everything in its power to sign Edwin Encarnacion.  If they could have a DH club 30 HRs+ and add 100 RBI for the next 3 – 4 years. it would take a lot of pressure of the young guys – and in particular Gary Sanchez

With Bird coming off injury. and Tyler Austin only having limited time at 1B. having an answer to replace those guys on the roster would also be an idea oo.

While I love Beltran, yet his age is a concern in my view.  His lack of playing in the field has to be considered a deterrent..

New York is undoubtedly revving up their engines to rake a run at Bryce Harper in the 2018 winter, and could easily peacemeal it together on the roster for a couple of seasons to make it there.

The organization should see if Aaron Judge can play everyday by then.  They should also see what they have in Clint Frazier and Gleyber Torres.

Young talented prospects are fantastic to have, but need time to cultivate by playing everyday

Jake Arrieta is the premiere pitcher non the open market after this year. With the dollars finally coming of the books for CC Sabathia. the Yankees will have the financial flexibility to offer top dollar for the big RHP before the 2017 year.

I would also highly expect Jake Arrieta to be front and center in their plans for the 2017 Free Agent Class of pitchers.  Also lookout for these pending Free Agents to possibly reside at Yankee Stadium:  Jay Bruce, Todd Frazier, Carlos Gonzalez and J.D. Martinez.

Yu Darvish, Matt Harvey, Dallas Keuchel and Garrett Richards are the cream of the crop when it comes to Free Agent Pitchers prior to the 2019 season.  I expect the Yankees to land one of these fine gentlemen.

Bryce Harper finally came of age as a budding superstar in the league with 42 HRs in the 2015 season – which tied him for the NL Lead. This past year he wasn’t as lethal, but he is just 24 – and is capable of launching a  few50 HR seasons in his career – and should be planned for by the Yankees to spend all necessary cash to land his services for the 2019 season – where he will still just be 26.  New York will be able to offer more years than any other National League team because of the role of DH being offered for later season n the contract.  Having one of the best young players in the game donning the Yankees uniform will be good for the MLB.  Harper has expressed a love for the Yankees growing up, and an ultimate wish to play in the Bronx.