Los Angeles Angels State Of The Union For 2016

The Angels could easily upgrade their 2B and LF positions, and will need to compensate for Albert Pujols to at least miss the start of the 2016 season as well. They have great depth in the Pitching Rotation, however are bogged down by the Jered Weaver and C.J. Wilson costing them a combined $40 MIL. Add in $30 MIL in buyout/dead money and the team will have a tough time competing in 2016 without nearing $200 MIL in total team payroll.  This means that Arte Moreno will have to give new GM Billy Eppler some more money to dole out to Free Agents.  Will he do it?  I am afraid for the Halo’s in 2016 if he doesn’t bring in 2 – 3 more upgrades..

It has been a slow but somewhat productive winter for the Angels brass, and in particular for new GM Billy Eppler.  They have done the kind of deals that will work only if they still pull the trigger on signing a premiere player.

This came on the heels of trading for Andrelton Simmons, who has 5 years of Team Control left for a guy that only had one more year of salary on the books in Erick Aybar. 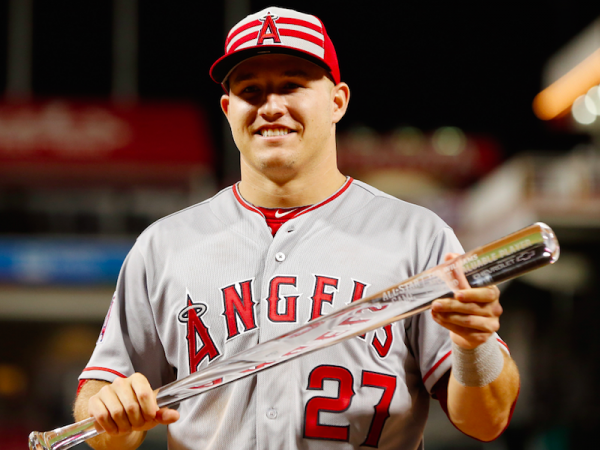 Mike Trout won his 4th Silver Slugger Award and now has 3 runner ups for the MVP and one MVP that he won last year. He clubbed 41 HRS in 2015 at the Age of 26. Baseball Reference is only projecting 31 big flies for him in 2016 – and I think he will be closer to 50 HRs and as opposed to 30 HRs. 41 HRs was good for third in the AL behind Chris Davis (47) and Nelson Cruz (43) in 2015. I believe the Angels slugger will win his 1st HR crown next campaign.  He needs a better supporting cast to help elevate his club back to an AL West Division win – and especially past the 1st round in the playoffs – which they failed to do in 2014.

Sure Simmons contract pays $53 over those 5 years, but you see the going rate for anybody in the Free Agency at the position, and this guy might be the best defensive player at Shortstop in the Majors.  The club already has plenty of offense.

Having said the first two deals, the club is still missing an Outfielder to patrol beyond the grass with Mike Trout and Kole Calhoun.

I am thinking that depending on what guy they select will also determine whether C.J. Cron will be able to play Designated Hitter to start the campaign, or be in the 1B/OF defensive positions.

I am surprised the club didn’t bite on the availability of John Jaso, but again once Albert Pujols comes back in the mix – he should be the everyday DH.

It sure would be nice if the team could find a First Baseman with Left Handed pop.  I think Justin Morneau or Pedro Alvarez would be a perfect addition to stem the tide until Albert Pujols comes back in the lineup.

I really feel like the club should consider trading C.J. Cron.  Perhaps the Chicago White Sox may be interested in a deal where they could land Cron back for an Adam LaRoche?

Another guy the Halos could have at First Base is James Loney.  The Rays already have Logan Morrison for the 2016 year, and I am sure they would be in the market to trade Loney, who makes $9.7 MIL.

The Angels should really be in on any premiere Outfielder left on the table.  Whether it Yoenis Cespedes or Justin Upton, these guys need a significant upgrade on the LF position.  Right now Daniel Nava and Craig Gentry are listed as #1 and #2 in Left Field, not good enough fellas.

Among other changes the team should consider, is an upgrade at 2B.  It wouldn’t kill the Angels to bring back Howie Kendrick to man the field there.  His absence in 2015 was sorely missed.  If Kendrick can’t be lured back, than perhaps a nice Utility bat like Kelly Johnson would be a good move.

Forget Johnny Giavotella and Cliff Pennington for the spot.  The Angels should not waste another year of Mike Trout.

Currently the team sits at around $167 MIL for the budget in 2016, yet with the 3 Million people the team draws, combined with TV revenue’s, there is no reason why this club can’t range around $200 MIL for next year.

Yes that would put them over the Luxury Tax Threshold for one year, but who cares at just a 17.5% penalty.

If Jered Weaver and C.J. Wilson can be healthy and rebound, than this is the last year for both of those players.

Another reason to sign 2 – 3 more players for the lineup was a brutal bench roster in 2015 that included Efren Navarro, Taylor Featherston, Collin Cowgill, Dan Robertson, David Murphy. David DeJesus, Kaleb Cowart and Grant Green – who all could not top a .700 OPS in limited AB – with most of them not reaching the Batting Mendoza line either.

Presumably, and with great reservation, I will say that I don’t mind the depth charts for both the Bullpen or Rotation in 2016.

With Garrett Richards, Wilson, Weaver, Andrew Heaney, Matt Shoemaker, Nick Tropeano, Hector Santiago and Tyler Skaggs potentially falling into the mix recovering from Tommy John Surgery, this franchise should have enough to have 162 productive starts in the regular season.

Both Weaver and Wilson are on the last year of their contracts, and the pair of them eclipse the $20 MIL price tag forth coming in 2016.

Richard has the ability to be a #1 Starter in this league.

I don’t think Weaver is finished by any stretch.  I concur with the Baseball Reference projections of a near .500 record with a 4 ERA in 2016.  Maybe not $20 MIL worthy, but capable of pitching like a #4 starter is not beyond the realm.

Hector Santiago has also learned how to be a good professional pitcher.  He made the ALL – Star team in 2015 with a great 1st half, and has put forth a respectable 3.65 ERA and WHIP of 1.299 in 56 Starts – spanning his 1st 2 years as a member of the Halo’s.

Really the club needs Wilson, Heaney or Shoemaker to take the reins as the #2 in the coming year.

Huston Street still is as solid as a Closer there is the American League.  Look for usual 40 Saves and subpar 3 ERA.

Joe Smith, Jose Alvarez and Fernando Salas are capable late inning guys.  It is paramount that Mike Morin bounce back after a brutal 6.39 ERA in his frames – after posting a brilliant 2.90 clip in 2014.

One of the Starters who don’t make the rotation could also stand to eat some innings up in the Relief Core.

The club could use another LHP of the pen like Jeremy Affeldt or a Matt Thornton to take out the good Left Handed Batters in the AL West.

Perhaps Bobby LaFromboise will take the role as well, but it never hurts for incremental upgrades.

The Angels have struggled to find consistency at the Catchers position since the tandem of Mike Napoli and Jeff Mathis gave them some nice years.

Geovany Soto and Carlos Perez should split the duties.  Soto is barely league average, but I would be highly suspicious he can last the whole year – as he has battled injuries over the last few years.

If the Angels are in contention  midway through the year – they could pick up a Catcher like A.J. Pierzynski, Nick Hundley as a midseason pickup.  If they could afford it, acquiring a backstopper like Matt Wieters may also be a plausible scenario if Baltimore is out of it.

Should the club sign some other players than the onus may not need to be placed on the backstopper tandem.  At least Soto is a decent Catcher defensively.

We have spoken about the rest of the Infield already.  Cron should back up Pujols to start the year at 1B, although the team really doesn’t feature a quality bat to take over the Designated Hitter slot.

Mike Trout should continue his assault on American League pitchers.  Expect 40 HRs, 100 RBI and Runs, and an overall MVP type season.  In his 4 years a full time professional, he has 3 runner up MVP’s – with taking home the honor in 2014.

Kole Calhoun is a great defender, and just like Trout, captured the Gold Glove in 2015.  He also cracked 26 HRs and added 83 RBI.  I hope the club can find a suitable Leadoff player, so he can drop down in the lineup, as his .319 career OBP needs a little work.  Nevertheless, this guy is a core guy to this club.

If the Angels aren’t able to attract Upton or Cespedes, than they best be in the Alex Gordon and Denard Span market.

Can you imagine the defense if they added Alex Gordon in LF?  Holy cow.  Between those guys, and then Simmonds in the Infield, you have 4 Gold Glovers.

Gordon had won 4 Gold Gloves prior to 2015, and his 58 Games missed may have cost him a 5th season in a row.  it would cost around $20 MIL a year to land his services, but it would be money well spent.

His Left Handed bat presence would be a welcomed addition – and I could see him hitting 1st for the Halo’s with a .348 career OBP. 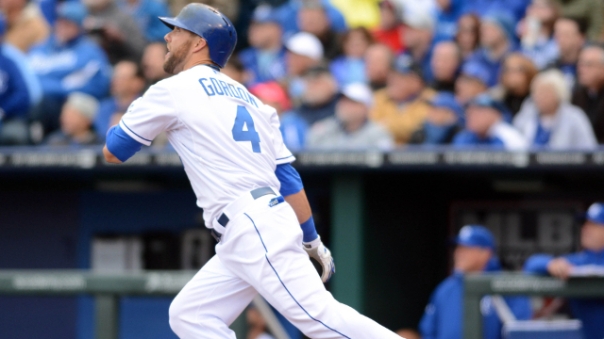 The Royals should be looking for the Yoenis Cespedes and Justin Upton sweepstakes to add a premiere LF to their club, however if they are to sign a guy like Gordon for 5 years, $18 – $20 MIL per, they could stock their OF with 3 Gold Glove caliber guys beyond the grass, with Simmons still on the Infield perhaps taking the throne as the best defender in all of baseball. Gordon could hit Leadoff for the club, and has 311 Games experience hitting 1st in his life. Gordon comes into the 2016 season with a 3 Slash of .264/.348/.435 for his 9 year career this far – all with the KC Royals.