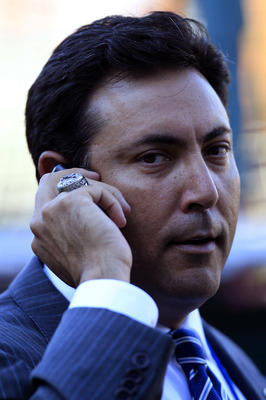 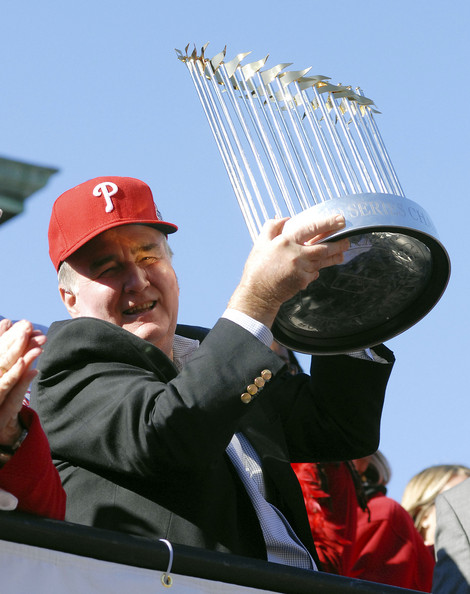 The teams president and CEO, David Montgomery (Seen here at the World Series Rally in 2008), while on extended medical leave, is also to fault for this current mess. He has stated ‘that the Phillies need to put out name stars’ to draw fans. Hey here is a concept for you David courtesy from Sully Baseball. “Trade Veterans – when your team is not competitive in certain years – to replenish assets in your franchise, and then re-stock your name players in Free Agency after the season is over. Circa the 2012 Red Sox when they unloaded several high priced ALL – Stars, acquired a bevy of young players + then reinvested every cent saved on payroll into players that helped them win the 2013 World Series! Your $170 MIL payroll in 2014 may amount to just 75 wins.  That is pathetic.  Your fan base want your franchise to make smart baseball decisions, none of really happened since Ryan Howard broke his ankle in the 2011 Playoffs.”

Notable trades during Rubens tenure (I will grade every trade from 1-10):

December 6, 2012: The Minnesota Twins traded Ben Revere to the Philadelphia Phillies for Trevor May and Vance Worley. (7/10)

December 9, 2012: The Texas Rangers traded Michael Young and cash to the Philadelphia Phillies for Lisalverto Bonilla (minors) and Josh Lindblom. (6/10)

Overall the results are mixed but Ruben was very successful in a few trades including getting Cliff Lee and Roy Halladay.

He also lost a couple when he traded Lee (to Seattle) and acquiring Hunter Pence.

A big problem i see is that he hasn’t made a big trade in almost two years despite having pieces (Lee, Hamels, Byrd, Utley) that he could move.

You have to wonder if RAJ is afraid by the disappointing returns he got in the Victorino and Pence trades.

Next lets look at his major signings/extensions: 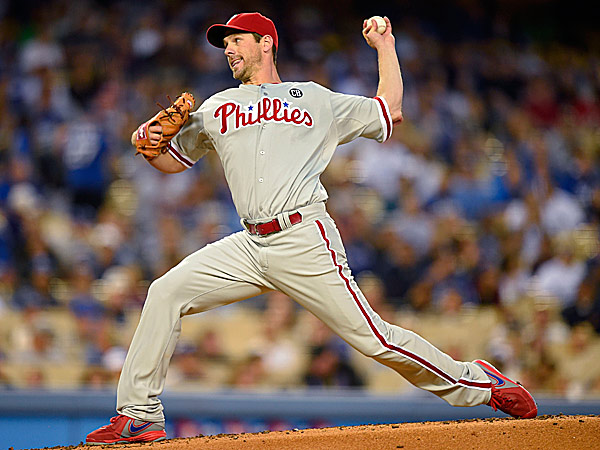 Trading Cliff Lee originally to the Mariners was not a good move at all. Signing him to a Free Agent deal has been decent. Overall this pitcher has been good for the organization, as was Halladay when he was acquired. It was too bad for Amaro JR. that Doc had such a precipitous fall to retirement – after posting such a great first few seasons.  The prospects in that deal have definitely not come back to hurt the Phillies in that regard.  The one that may hurt the most long-term is the Astros deal, in which they gave up Jon Singleton and Jarred Cosart for just a year’s worth of Hunter Pence.

If you take out Ryan Howard’s embarrassing contract there were not really any crazy mistakes. With Rubens moderate success with signing free agents I cannot understand why he refuses to trade veterans when he can just sign them in free agency

There is still risk though in Cliff Lee and Cole Hamels contracts which could come back to bite them in the wallet.

An opportunity presented itself to get impact talent at the deadline this year for Hamels –  but no trade even though money would have been freed up for them to take a run at someone like James Shields or Max Scherzer.

Lets not look at what his front office has done in the draft and the Phils current top prospects:

2009: Gave up pick to sign Raul Ibanez. With that pick Seattle took Michael Franklin who busted.

Pick #39 they took Larry Green who looks like a bust.

2012: Gave up pick to sign Jonathan Papelbon. Boston took Brian Johnson who is a good prospect.

Pick #40 they took Shane Watson who is a fringe prospect.

Pick #54 they took Mitch Gueller who has had a good season.

They have recently hit on their picks but have given up 3 first round picks since Ruben took over which is way to many. They have 3 prospects in the top 100 with only Maikel Franco not being a first round pick. They need to focus more on the farm system.

They had one of the highest payrolls in the league and are one of the worst teams.

I am going to try to predict the 2016 opening day roster as it stands right now and it doesn’t look all to pretty. The age and dollars will be in 2016 as already stated.

Next year won’t look very peachy as well, with A.J. Burnett now exercising his own player option for the 2015 season at 10 or 12 MIL.

Overall that comes out to a very poor team that will likely lose around the ballpark of 90 games. They will have a large payroll with a lot of it being spent on unproductive players. I feel bad for Phillies fans.

Now tell me, do you think Ruben Amaro Jr should be the Phillies GM for even one more day?

How All Of The Phillies Hitters Were Acquired: 2014 Roster Tree

Chuck Booth, Paul Sullivan and Hunter Stokes all help contribute to this article by Jordan Gluck. 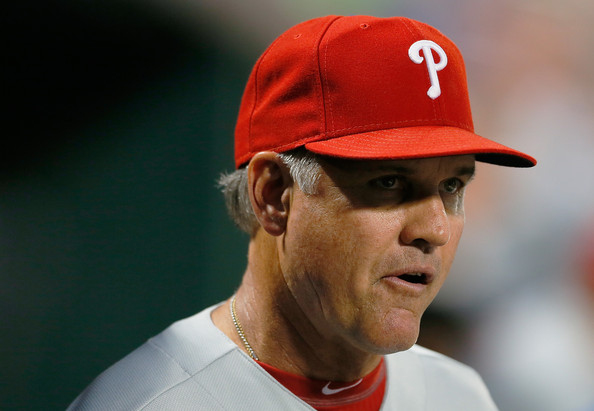 Ryne Sandberg was selected for the coaching position by Amaro JR. So far it has been a disastrous season for the 1st full season skipper. In house bickering between he and several Veterans has caused massive rifts in the clubhouse. The Hall of Famer’s day’s may also be numbered in the organization.  It should take a miracle for this guy to be brought back to the fold next year at the helm of this team.

A Big thanks goes out to our ‘Prospects/Organization Expert’ Jordan Gluck for preparing today’s feature post.