← Beane Acquires Lester + Gomes For Cespedes: Then Acquires Fuld For Millone
How All Of The Red Sox Hitters Were Acquired: 2014 Roster Tree – Updated For Cespedes + Craig + Johnson Deals → 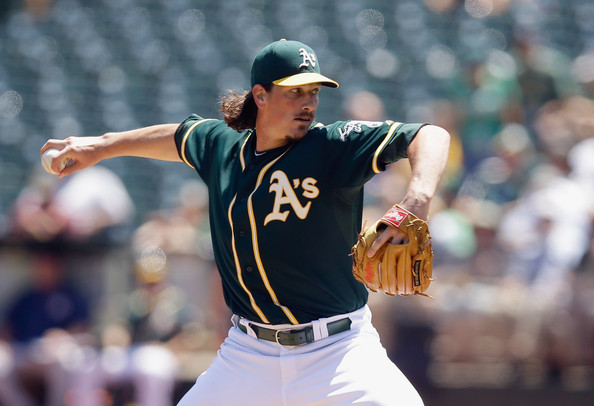 Part of the lure in acquiring Samardzija was that he had 1 year left of Arbitration. He will likely cost in the $12 – 15 MIL range for 2015. He tops the list of several A’s players that will be ARB eligible in 2015 like Moss, Donaldson, Cook, Parker, Jaso, Reddick and Gentry. While the club is going for it in 2014, there unloading of Cespdes’s $10.5 MIL 2015 salary will be used to pay these guys raises. Some of the club will be traded or released. The A’s should still have about $25 MIL to spend on 7 or 8 guys next year. Their $95 MIL projected payroll in 2014 is their highest ever recorded for any one year.

Wow.  What a roster that has been assembled by Billy Beane in the last 30 days or so.

Make no bones about it, the reason the Money Ball GM was able to this was one from depth strength – coupled with being the master of financial flexibility.

We all know that the A’s have shied away from giving long term pitching contracts, or heck, from lucrative long contracts to positional players.

Ever since the team offered Jermaine Dye a big deal at the time, only to see his production fall off, then to be resurrected in other uniforms, did the management learn to ply their craft.

The team also doled out megabucks for Eric Chavez after that, then to watch him suffer through countless injuries.

Beane made off like a bandit dealing Rich Harden before he eventually broke down.  Oh yeah, the GM received Josh Donaldson for that trade.

It has been a brass that sees about 50 roster transactions every year.  The key is to always sell high, and mix in the right amount of Free Agent veterans.

All of that ‘baseball rounding’ afforded the “Moneyball” GM to go for it this year.

Beane knows how to run his payroll with not much room to maneuver. In the last year he has rebuilt 70% of his Pitching Rotation, and all of this was able to do with his club’s depth. The payroll wouldn’t have escalated if Griffin and Parker went out with season ending TJ surgeries.  The A’s brass realizes the chance to win is in 2014 and 2015, before all the core guys hit Arbitration or Free Agency.  That is the defining characteristic behind pushing all chips in right now!

Aside from the $10 MIL the club is eating with the disaster that was Jim Johnson, the payroll is filled with guys that are playing beyond their value.

Another reason for trading Cespedes, is how many guys are available for Arbitration in 2015, and will receive big cash contracts.

As of right now, there are only a few guys with deals for next season with guaranteed cash. Kazmir makes $13 MIL, Crisp is at $11 MIL, O’Flaherty is at $5.5 MIL, and Doolittle is at 780K.

With Samardzija on the books, I expect the club to bow out of Nick Punto‘s $2.75 MIL option, and opt for the 250K Buyout.

Sogard will be lucky to be retained by the club for the 850K to $1 MIL he will be due for ARB.

I think the club will walk away from Kyle Blanks too.

Fuld will likely be gone too, as I see the club using Billy Burns in his role.

There will be holes to fill at SS/2B and a new LF will be needed.

With Moss and Reddick accompanying Crisp for the starting OF in 2015, perhaps the club will spend money on a DH/1B type in 2015 like an Adam Dunn.

All of those numbers are contingent if he is granted extra year of ARB in 2014.

Arbitration Eligible Players for 2015 (contracts for 2014)

The Athletics don’t make too many mistakes when it comes to doling out money for deals. Among them in 2014, are $3.125 MIL to MiLB INF Hiroyuki Nakajima, and $10 MIL to Closer Jim Johnson. Despite that fact, the $95 MIL spent on this year’s budget still puts them in the bottom half for team payroll. Smartly, no one is owed more than $22.75 MIL beyond 2014 on guaranteed deals (Crisp for 2015 and 2016, with a 750 K Buyout if he vests his 2017 deal – and the club withdraws the $13 MIL Mutual Option). Not having hoards of money on long term deals keeps this club flexible.

← Beane Acquires Lester + Gomes For Cespedes: Then Acquires Fuld For Millone
How All Of The Red Sox Hitters Were Acquired: 2014 Roster Tree – Updated For Cespedes + Craig + Johnson Deals →
Loading Comments...