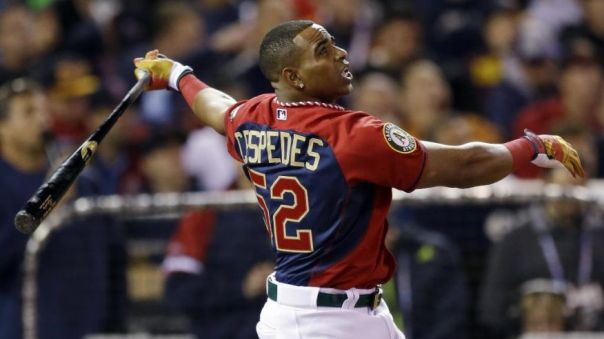 I have had enough with the experts flogging on the HR Derby last night.

Yes, it took long, but not as long as last year. I believe the actual event was under 3 hours. What every one was feeling had a lot to do with the hour plus rain delay.

I loved the new format of 7 outs, and AL vs NL. If there is anything I think the MLB could do away with – is having 5 players in each league participant.

I firmly believe that Jose Bautista and Giancarlo Stanton suffered because of an inactive round caused by them both winning a bye. 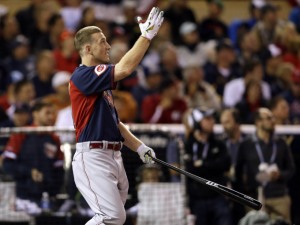 Todd Frazier was lucky to make it to the 2nd round, and after he put forth his best round against Troy Tulowitzki after that. He narrowly made the final with 1 HR in the 3rd Round because of a donut for heavy favorite Giancarlo Stanton. In the final, he was no match for Cespedes, losing 9 – 1.

On a personal note, my I was happy to have my final 2 predicted correctly of Yoenis Cespedes and Todd Frazier into the final.

Both of those men has a lackluster first round, before winning swingoff matchups into the 2nd round.

Frazier acquitted himself nicely in the 2nd Round, by clubbing 6 longballs, and most of them with the just a few outs left to spare.

The Reds OF only hit 4 HRs in the 1st, 2nd and 3rd Rounds combined.

The only modification I would impose it to shorten the field to 8 guys (4 AL and 4 NL), and then have the same 4 rounds listed, but have the leaders for each league not receive the bye.

One of the things I give the MLB credit for is its increased awareness towards adding bracket to their ALL – Star Game, and Post Season for that matter.

They should be working with the sponsors more vehemently to up the ante for payouts.

Instead of having fans eligible to vote 25 times for each player in the ASG, they should really hammer the promotion of the free contest angle.

The NCAA makes a killing of free publicity because of the brackets they have for the Final Four Tournament.

Offering $25,000 was nice for Samsung to throw out there, but how about we offer that prize value ten-fold to the winner? and a cool $1 MIL for anyone that can predict a perfect bracket? 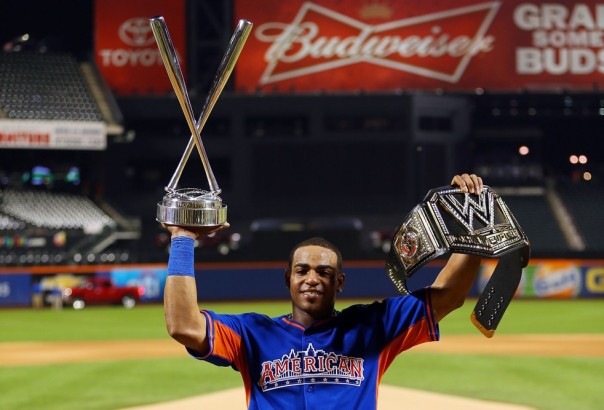 Yoenis Cespedes became just the 2nd player to win back to back titles in the M:B HR Derby Last Night. By winning his 2nd title, he also joins Prince Fielder and the aforementioned Griffey, as the only three guys to win multiple titles. At just age 28, and with that swing, you have to think he has a chance to eclipse everyone and take down a few more of these HR Derby Trophy’s. It was funny to see him with the HR Derby Trophy in one hand – and a makeshift WWE heavyweight champion belt in his other. Cespedes belted 30 HRs over the course of his 4 Rounds, to blow away the competition.