Orioles vs. Yankees: Curse of Maier May Be Over

The last time the Yankees and Orioles met in Postseason play was in 1996. The Orioles lost that series, and a lot of fingers were pointed at the controversial home run caught young fan, Jeffrey Maier. The Orioles postseason fate may be different this time around against the Bronx Bombers.

The last time the Baltimore Orioles and the New York Yankees met in the playoffs was in 1996 in the ALCS.  Like in 2012, Andy Pettitte and Derek Jeter were on the Yankees roster.  The Orioles boasted a lineup that consisted of Rafael Palmeiro, Roberto Alomar, Cal Ripken Jr., B.J Surhoff, and Brady Anderson—who was having a career year.  That lineup, along with a rotation consisting of Mike Mussina and Scott Erickson and Jimmy Key, gave Baltimore an imposing roster that the Camden Faithful could expect to make a playoff run.

15 years later we see a tale that is much more of a David and Goliath story. The Orioles have not been in the playoff’s since 1997 and have finished 5th place in the AL East for the last 4 consecutive seasons.  The Yankees, conversely, have made the postseason 17 out of the last 18 seasons.  After getting off to a hot start, the Orioles made a trade for future Hall of Famer, Jim Thome, to help add some pop and veteran leadership to their lineup.  Even later in the season, when the team still found themselves in serious contention for October baseball, they called up 20-year-old phenom Manny Machado, who wasn’t even alive when Jim Thome took his first swing in the Major League.  Now, Manny Machado finds himself playing on the same field as his childhood hero, Alex Rodriguez. END_OF_DOCUMENT_TOKEN_TO_BE_REPLACED

Comments Off on Orioles vs. Yankees: Curse of Maier May Be Over 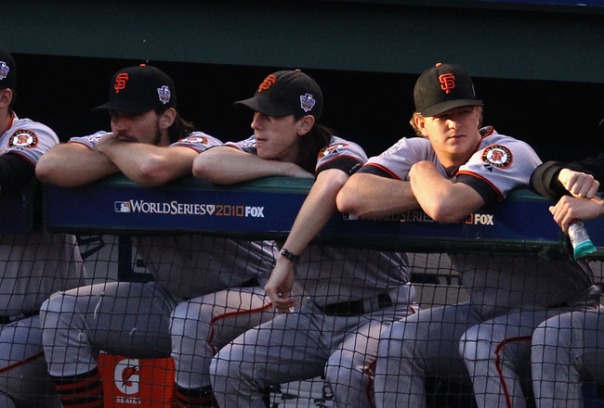 In the postseason though, the bats have yet to come alive.  Through the first 3 games in the NLDS, the Giants have just 12 hits, including just 3 in game 3, 2 of which came in the 10th inning. They had only 2 hits in game 2. Add to the fact that in both games 2 and 3, they were getting no-hit through at least 5.2 innings. END_OF_DOCUMENT_TOKEN_TO_BE_REPLACED

Comments Off on The 2012 San Francisco Giants Postseason Update

The Athletics and Orioles: Staying Alive in the 2012 ALDS

Sam Evans:  The 2012 MLB playoffs have been thrilling so far. From Lew Ford to Derek Jeter, every player on the field is playing like they have something to prove. Two of the most exciting teams during the regular season, Oakland and Baltimore are both trying to prove that they belong in the postseason. So far, both teams have been successful in doing that. Both teams have benefited from outstanding pitching performances, but other than that- the two teams are very different.

Oakland finally looked like the team most hoped they would be on Tuesday, shutting out the Tigers 2-0 at home. Detroit still leads the series 2-1 but Oakland has home field advantage and better back-end starting pitching. With young talents such as Yoenis Cespedes and Jarrod Parker, Oakland, for the first time in what seems like forever, has put together a roster that is exciting to watch. With their pitching, the Athletics have a legitimate shot at advancing in the playoffs. END_OF_DOCUMENT_TOKEN_TO_BE_REPLACED