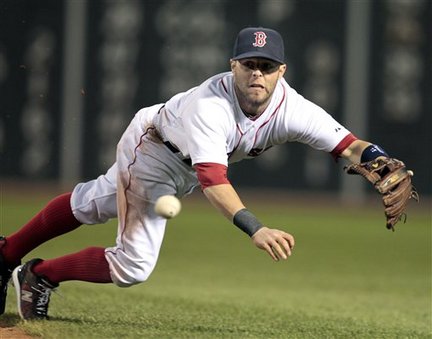 As the longest-serving Red Sox Offensive Player under contract, Dustin Pedroia needs to return to his MVP like form of a few years back for Boston to be in contention next year.

Chuck Booth (Lead Baseball Writer): Follow @chuckbooth3024– In one fell swoop, the Boston Red Sox went from a team with no payroll flexibility at all for years to come, to a team that only has 4 players under contract for 57.2 Million Dollars next year.  It is actually around 43 Million Dollars for Dustin Pedroia (10 MIL), John Lackey ,(16 MIL) John Lester (11.6 MIL) and Clay Buchholz (5.8 MIL.)  Now since they are paying about 15 Million to the Dodgers as part of the trade it takes the total up to about 57 Million.  So how does the team look going forward?  Not that bad actually.  The have about 25 Pre-Arbitration to Arbitration Eligible Players to re-sign.  A lot of them are under club control or will not fetch that much of a boost in pay.  Jacoby Ellsbury will probably get a bump from the 8 Million he received this year and Jarrod Saltalamacchia will also be due a raise from the 2.5 Million in 2012 with his breakout power year.  Daniel Bard is a “Super 2” Arb Eligible Player and should not be that hard to resign considering  his ineffective year.  The most pressing thing to do is to resolve the David Ortiz matter and then to grab a couple of free agent pitchers and a power hitting First baseman or an outfielder.

Judging from my best estimate, it looks like the Boston Red Sox will have about an 100-110 Million Dollars for all of their Arbitration players, plus the guys already signed.  This leads me to David Ortiz.  He should be given a 2 or 3 year contract as soon as humanly possible at 15-16 Million Dollars a Year.  He was the only player in the AL to have an OPS over 1 still going into tonight.  Yes he has been hurt, but ‘Big Papi’ is not finished in the MLB.  Yes he will be 37 heading into next year but he has been the best DH in the AL over the last 3 years.  Ortiz had said earlier this year-that he would be open to playing for other teams so the brass better make him feel wanted or he will walk! He genuinely likes Pedroia so I am sure Ortiz could be persuaded to come back.  You have to at least find this out early as it will let you know how to proceed on the Free Agent Market.

Here are some David Ortiz highlights.  THIS VIDEO CONTAINS CLIPS COPYRIGHTED FROM MLB ADVANCED MEDIA. MLB REPORTS  DOES  NOT OWN THESE CLIPS.

END_OF_DOCUMENT_TOKEN_TO_BE_REPLACED

Chuck Booth (Lead Baseball Writer and @chuckbooth3024 on twitter)-We are going to bring you monthly power rankings every month of the season.  There will be a few notes written for each team.  Please feel free to let us know your thoughts.  The Texas Rangers are the top ranked team yet once again, although teams are certainly gaining on the them in the last week.  Look out for Cincinnati Reds and New York Yankees to make their move towards the top this month.

1. Texas-32-22 (1) The Rangers rode Josh Hamilton in the month of May-who enters today on pace for about 60 HRs and 170 RBI while hitting .354.  Nelson Cruz is starting to heat up and the duo of Adrian Beltre and Ian Kinsler are steady as as ever. Yu Darvish is 7-3 en route to the leading the group amongst Rookie of The Year Contention.  Joe Nathan is looking like his old self again out of the pen with an ERA under 2.

2. LA Dodgers 33-21 (5) Even with Matt Kemp out of the lineup again, the Dodgers are winning ball games with solid contributions from Andre Ethier and A.J Ellis on offense.  The pitching staff has been anchored by Clayton Kershaw and a fast 7-1 start by Chris Capuano.  Ted Lilly was 5-1 before a stint on the DL.  It is too bad because Lilly is 125-104 since 2004.

3. Tampa Bay 31-23 (2) Hideki Matsui homered in two of his first 3 games back with the Rays.  The team has had steady pitching to stay in contention.  Carlos Pena has really struggled in the last month and will need to pick it up.  Luke Scott with 35 RBI has good production numbers in spite of his .225 AVG. Fernando Rodney has converted 17 out of 18 saves to pace the club.

4. Cincinnati 30-23 (12) Joey Votto has hit .404 in the last 30 days and maybe the best all-around hitter in the National League right now.  Jay Bruce has 12 HRs and 34 RBI and is living up to his all-star potential.  Aroldis Chapman has 27 Strikeouts in just over 14 innings and has yet to yield a run while opponents are hitting a paltry .043 against him.

5. NY Yankees 29-24 (6) The Bronx Bombers have 6 players with 8 HRs or more, which is a good thing because with the exception of Derek Jeter, a lot of them are hitting under their career averages.  The return of Andy Pettitte has helped the rotation with the loss of Micheal Pineda.  Phil Hughes threw a complete game over the weekend and CC Sabathia is on pace for another 20 win season. END_OF_DOCUMENT_TOKEN_TO_BE_REPLACED