Robin Yount said on the leadup to his 3000th hit that it wasn’t going to be a big deal.  The man who took more pride in his Milwaukee Brewers winning ballgames than personal stats found out he was wrong – the 3000 hit plateau was a huge deal.  On September 9, 1992, a crowd of 47,589 packed Milwaukee County Stadium to see history made when Yount became the 17th MLB player to reach the mark.  He tied Roberto Clemente for 16th on the list.

The Brewers are 1 – 9 in their last 10 games. They have had the biggest swings in win streaks and then losing streaks. The club has played 21 games at home versus 14 on the road.

Comments Off on This Day in Milwaukee Brewers History: Robin Yount’s 3000th Hit

This weekend the Milwaukee Brewers honored the 1982 World Series team with special promotions and ceremonies.  I’ve done my fair share of reminiscing of that team over the weekend, and it got me thinking…what exactly were the Brewers up to on these dates in 1982?

I vaguely remembered some of the details from the research for my Brewers book, but started revisiting that specific era (July 14-16, 1982) again to put myself back in the right frame of mind for this blog post.  So here are the details…

An old well-known expression is “April showers bring May flowers.”  On May 1, 1975, the Milwaukee Brewers showered hits all over Milwaukee County Stadium in a 17-3 victory over the Detroit Tigers.  Every Brewers starter reached base that day, but it was also one of the rare times that both Hank Aaron and Robin Yount went ballistic on the opposition in the same game.

Comments Off on This Day in Milwaukee Brewers History: A Robin Yount and Hank Aaron Hitting Clinic

I took a look at standard Hall of Fame stats as well as some simple Sabermetrics and then others like awards, games played at other positions, etc. Finally I took a look at Baseball-Reference.com’s who are they most like for their career. Take a look at how Tram faired…

Comments Off on Baseball Hall Of Fame and Alan Trammel; Stacking Up Against Yount, Ripken, Ozzie, & Larkin

Milwaukee Brewers State Of The Union For 2014

The Milwaukee Brewers had a modest 2013 season, yielding a 74 – 88 record. They finished 23 games back in the NL Central (ahead of only the Chicago Cubs) which saw three of its five teams reach the playoffs. The farm system cupboards are bare, with not one single top 50 prospect in it’s ranks. A rebuild is necessary but general manager Doug Melvin seems more in tune with adding free agents instead of using home grown youth (Although they do have a few on their current roster). The Brewers are picking a respectable 12th in this years Major League draft, and every effort must be make to start making those picks count, or the club may find themselves on the outside looking in while division opponents Cincinnati and Pittsburgh regularly see post season play.

Milwaukee Brewers State of the Union: A Long Road Ahead

As recently as 2011, the Brewers held the National League Central Division title.

Historically the fans are still biding their time though, having not seen a pennant since the Brewers were in the American League and won it in 1982.

Milwaukee’s own Robin Yount won the AL MVP that year, but the Brewers inevitably lost out in the World Series to the St. Louis Cardinals.

END_OF_DOCUMENT_TOKEN_TO_BE_REPLACED

Comments Off on Milwaukee Brewers State Of The Union For 2014

Will Jose Bautista Get Back To His Hank Aaron Award Winning Ways in 2013? 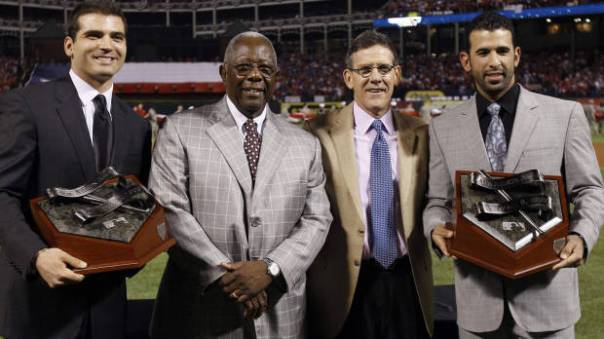 Jose Bautista with fellow Hank Aaron Award winner Joey Votto in 2010. In 2010 Bautista became the 26th player to ever hit 50+ HRs in a single season, eclipsing the mark with 54.

Who is Jose Bautista? He is a 32-Year Old, Dominican, Major League Baseball player. He is the starting Right Fielder and number 3 hitter in the Toronto Blue Jays lineup. He is a 3x All-Star (’10-’12), 2x Silver Slugger Award winner (’10-’11), and 2x Hank Aaron Award winner (’10-’11). Bautista is a former 20th round draft pick of the Pittsburgh Pirate s- who struggled to make any significant impact for a Major League team into his late 20’s. He arose from baseball obscurity and launched into the spotlight seemingly overnight. Bautista’s breakout campaign in 2010 was followed with an even better 2011, which was all foreshadowed by a promising September in ’09 – where he tapped into a power surge hitting 10 HRs in the month.

This was especially surprising since his career high for HRs in a season to that point was only 16 in ‘06. Modifications Bautista made in his swing were career changing. He completely reinvented the system he was using to time pitching, and it paid big dividends. Bautista’s success forced the Rogers Center to keep their roof open for all home games due to the amount of moonshots he was hitting. I’m only joking, but he did hit an MLB high 54 HRs in 2010 and 43 HRs in 2011.

END_OF_DOCUMENT_TOKEN_TO_BE_REPLACED

Comments Off on Will Jose Bautista Get Back To His Hank Aaron Award Winning Ways in 2013?

The Patrick Languzzi Interview: The Man Behind The Petition About The Dwight Evans For The ‘BBHOF’ Candicacy Campaign

Dwight Evans falls into that category with Don Mattingly, Mark Grace, Will Clark and Keith Hernandez. Guys that were the best players amongst their peers, (offensively and defensively) plus BBHOF Worthy (In some cases) – but are trounced on by the ballooned ‘Steroid era” numbers.

Under current Hall of Fame voting rules, the Expansion Era Committee meets once every three years to vote on retired players who are no longer eligible for election by the BBWAA, have been retired 21 or more seasons, and made their biggest contributions to the sport after 1972.  In addition to the retired players, the Expansion Era ballot also includes retired managers, umpires, and executives from the post-1972 era.  One player who is eligible to be included on December’s Expansion Era ballot is former Red Sox Right Fielder, Dwight Evans.

Despite owning impressive career totals such as 385 Home Runs, 2,446 Hits, and 8 Gold Glove Awards, Evans struggled to draw support in BBWAA Hall of Fame voting and fell off the ballot after failing to draw the necessary five percent needed to stay on the ballot on a very crowded 1999 election.  However in recent years, Evans has become a popular Hall of Fame debate in the sabermetric community and several articles have been written in support of his overlooked Hall of Fame candidacy.  One particular writer, Patrick Languzzi is spearheading a campaign to put Dwight Evans on December’s Expansion Era ballot.  Languzzi, who writes for MLB Reports as the Hall of Fame Correspondent, created his own website, Call to the Hall, which is devoted to bringing awareness to Dwight Evans’ overlooked Hall of Fame candidacy.  Languzzi even started a petition which calls for Evans to be selected as one of the twelve finalists on December’s Expansion Era ballot.  Languzzi was nice enough to take the time for me to interview him about his Call to the Hall website and petition.

JT: Patrick, you, along with Nick Carfardo of the Boston Globe were recently interviewed by Tom Caron on the New England Sports Network (NESN) to discuss Evans’ overlooked Hall of Fame candidacy (see link below).  What was that experience like?

PL: The experience was validating for me, meaning, when I started this project, I never imagined it would have gone as far as it has, and gotten the attention it’s drawn.  It’s great to see that I’m not the only one that feels that Evans’ case deserves to be revisited.

JT: You mention in the NESN clip that you got a chance to meet Dwight, what can you tell us about meeting him?

PL: Through all of my research, I’ve gotten to know Evans, and what I’ve found is that he is extremely humble and unwilling to discuss himself as a possible Hall of Fame candidate.  He was humble as a player too.  A good example of this is the clip from the 1987 All-Star game (see link to clip below) when Dwight fields a fly ball and fires a strike to home plate, Tim Raines the player at third holds from tagging up.

END_OF_DOCUMENT_TOKEN_TO_BE_REPLACED

Ryan Braun: Setting His Sights As An ALL-Time Brewers Great

1982….Mention this date to any Brewers fan and immediately you will witness a smile and a nod of the head. Very little has to be said that isn’t communicated with that simple smile and subtle shake of the head. Harvey’s Wallbangers; Cecil Cooper, Paul Molitor, Robin Yount, Gorman Thomas and Ben Oglivie to name a few. Coming off a (3-2) AL Division Series loss to the Yankees in 81′ the Brewers stormed in to 82′ ready to make amends. The Brewers began 82′ slowly going (23-24), thus Harvey Kuenn replaced Buck Rodgers. The Brewers made history going forward posting a (72-43) record leading the league in runs and HRs. This team poured it all out on the field before losing in Game 7 of the World Series to the St. Louis Cardinals. Yount, Molitor and Cooper will forever be household names associated with the epic ’82 team.

Fast-Forward 26 years….2008 & 2011….The Brewers finally made it back to the postseason. This time the club was led by Ryan Braun, Prince Fielder, Corey Hart and Rickie Weeks. These were both magical years but neither year ended in a World Series appearance. The constant and consistent cog of these two playoff teams was Ryan Braun. The “Hebrew Hammer” lead the team in batting both playoff years and put up power numbers as well as speed numbers. This perennial All-Star continues to perform as one of the best in the game, but how does Ryan Braun compare to the 82′ heroes of Yount, Molitor and Cooper. The following statistics were taken during 6 consecutive seasons for each player (only exception is the 84′ season for Molitor who was limited to 13 games, 85′ season was substituted).

END_OF_DOCUMENT_TOKEN_TO_BE_REPLACED

Comments Off on Ryan Braun: Setting His Sights As An ALL-Time Brewers Great