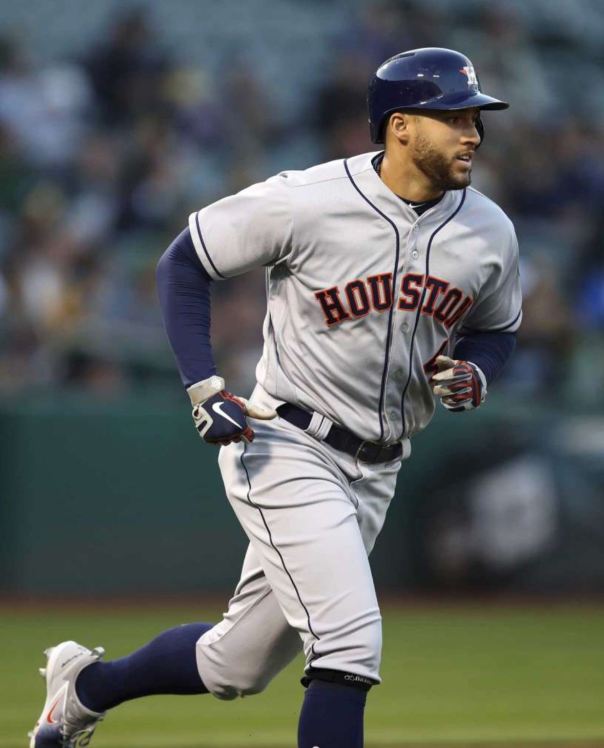 George Springer matched an Astros record with a 6 hit game, including a homer and a double, and led the way in a 16-2 thrashing of the A’s.

Matt Adams reached base 3 times, including a pair of homers, driving in 5 to help the Nationals beat San Diego, 8-5.

Fernando Romero threw 6 shutout innings, striking out 9 as the Twins blanked the Cardinals, 6-0.

Zach Eflin pitched into the 7th, throwing 6 2/3 shutout innings, 4 hits and struck out 9 Giants in the Phillies 11-0 blanking.

END_OF_DOCUMENT_TOKEN_TO_BE_REPLACED

The Pittsburgh Pirates Payroll In 2016 + Roster That Could Have Been 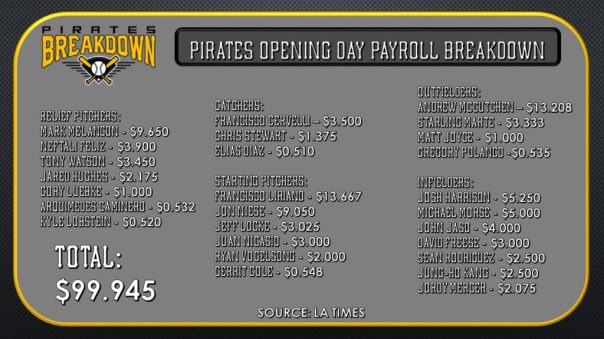 After a second consecutive exit from the playoffs by way of the wild card game, the Pittsburgh Pirates promised a bigger payroll this season, but could they have done better?

In December, Neal Huntington and Frank Connelly both hinted the Pirates target payroll would be approximately $105 million for opening day.  As it stands, the Pirates opening day payroll was about $100 million.

That wouldn’t be so bad if the team’s pitching staff wasn’t off to a rough start, the first base platoon partner wasn’t gone after two weeks, and the Cubs weren’t the center of the baseball universe at the moment.  The saying goes, “hindsight is 20/20,” but we consider what could have been if the Pirates had spent their money a little differently.

Let’s start with the breakdown of the opening day payroll broken down by position: (Note: Only players included on opening day 25-man roster/DL are included below.)

The rules for this little experiment are simple.  We cannot exceed $105 million, and our payroll has to include 28 players due to Jared Hughes, Elias Diaz, and Jung-Ho Kang starting the season on the major league disabled list.

If we choose any players the Pirates did not sign, we will assume the Pirates could have signed said player(s) to the same terms.  Knowing what we know now, here’s a look at what the Pirates roster could have been.

The 2013 Pittsburgh Pirates went from zeros to heroes, after 20 seasons of cellar dwelling. Finally, the people of Pittsburgh PA, finally had something to cheer about besides the NHL’s Penguins, and NFL’s Steelers. They were the last NL team to make the playoffs (Post 1994 Player Strike).

The Pirates not only kicked the playoff curse in 2013,  but they also embarked on a journey that saw them improve on their win total for a 4th consecutive season.

Neil Huntington could finally show the fruits of his labor in assembling his team.

In the last few years particularly, stalwart Draft pick Andrew McCutchen has asserted himself as one of the premiere players to suit up in the MLB right now. END_OF_DOCUMENT_TOKEN_TO_BE_REPLACED

Comments Off on Pittsburgh Pirates State Of The Union: 2014 Preview

The Pittsburgh Pirates broke a 21 Year Old playoff drought in 2013, by winning 94 Games, winning the Wild Card Game to the Reds – before bowing out to the St. Louis Cardinals in 5 games of the LDS.

Neil Huntington has done an exceptional job assembling this club both via trade an drafting.

Not signing A.J. Burnett to a deal is actually a smart move when you figure he is going to earn $16.0 MIL in 2014.  If the Bucs GM would have doled out the 1 YR/$14.1 MIL for the cagey veteran, it would have blown the teams salary structure. END_OF_DOCUMENT_TOKEN_TO_BE_REPLACED

END_OF_DOCUMENT_TOKEN_TO_BE_REPLACED

If all goes well with the team this year, the Astros could improve on their 2012 year. If all else fails, Houston might challenge the ALL-Time Loss Record. Whatever happens, any Veteran Player with a heartbeat will be on the trading block by June. The Astros will continue to dissolve any of their assets (with expiring contracts) onto other teams in order to pick off some more prospects. The Astros will also Draft 1st overall at the 2013 MLB Amateur Draft.  The Astros also play in the toughest Division in the Majors for pitching, plus have already put up back to back 100 Loss Seasons.  Their second half Won – Loss Records might challenge historic rates.

I’m assuming these teams will have a winning percentage of at least .475 and therefore will not be sellers although that doesn’t entirely rule out being sellers at the deadline. We are far away from the deadline but it’s nice to see who might be available. Nationals, Braves, Phillies, Reds, Cardinals, Brewers, Diamondbacks, Dodgers, Giants and Rockies (sleeper).

I believe these teams will be sellers and there are not many in the NL because of the parity. Many of these teams don’t have that much to offer so it would not surprise me if a team above (Brewers?) makes a few trades for over slot prices. Marlins, Mets, Pirates, Cubs and Padres.

END_OF_DOCUMENT_TOKEN_TO_BE_REPLACED 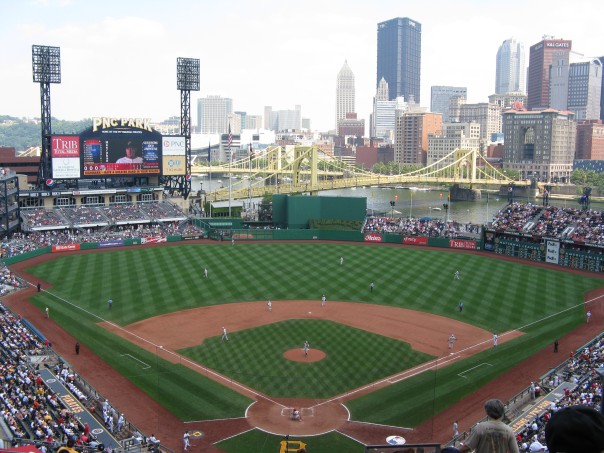 The Pirates are hoping to bring winning baseball for the beautiful PNC Park in 2013.

The statistical improvements are easy to decipher in Clint Hurdle‘s first two years as manager of the Pittsburgh Pirates. In 2011, the Bucs were 72-90, scored 610 Runs and gave up 712 Runs. Those were improvements of 15 victories, 23 Runs Scored and an impressive 154 less Runs Allowed.

This past season, Pittsburgh improved in all three categories again – earning 79 victories with 651 Runs Scored and 674 Runs Allowed. If it seems like an excruciatingly long time since Barry Bonds, Bobby Bonilla, Andy Van Slyke and Doug Drabek were leading the Pirates to a winning season and a third consecutive NLCS, that’s because it has been – two decades to be exact.

Bill Clinton was just starting his first term as President of the United States and something called Color Me Badd was popular on the radio.

Questionable music aside, if the Pirates want to put an end to all that losing, another year of similar improvement will get them over the .500 hump.

END_OF_DOCUMENT_TOKEN_TO_BE_REPLACED

Pittsburgh GM Neil Huntington has found creative ways to help the Budget out – by taking risks on Wandy Rodriguez and A.J. Burnett. They are both being paid portions of their contracts by their previous teams.  Signing Andrew McCutchen to a long-term contract has also given the franchise the ability to add players in 2013 if need be.

On August 8 of last season, the Pittsburgh Pirates were 63-47, 2.5 games back of the First-place Cincinnati Reds, securely into the second Wild-Card Spot – and had the fourth-best record in the National League. The wheels came off, the Bucs finished on a 16-36 slide, 18 games back of the Reds and with the 10th-best record in the NL. Reality could have caught up to a overperforming squad, or a youthful team took the next step in learning how to win. Either way, the Pirates enter 2013 with breaking a streak of 20 losing seasons on their minds.

General Manager Neal Huntington has been shrewd and active, signing MVP candidate Andrew McCutchen to a long-term deal in 2012 and getting other clubs to eat up significant chunks of their largest contracts when acquiring their top two starters. Starting pitching depth has been added and Huntington is even taking more high-priced risks, landing Catcher Russell Martin as a Free Agent.

END_OF_DOCUMENT_TOKEN_TO_BE_REPLACED

Comments Off on Pirates Payroll In 2013 And Contracts Going Forward

Pittsburgh Pirates Roster in 2013: State Of The Union

The Pirates have not made the playoffs since the 1992 Season. That year, Barry Bonds could not throw out Sid Bream from deep Short in Game #7 of the NLCS versus the Braves – and they were eliminated for the 3rd straight year in the playoffs before reaching the World Series.  Bonds subsequently left the team for the SF Giants in 1993 – and 20 losing seasons have since occurred. Only the Kansas City Royals have a longer streak of not making the playoffs (1985). Will this change in 2013?

Although the Pirates made significant strides in 2012, they still finished in fourth place in the National League Central – with a 79-83 mark – extending their professional sports record for consecutive losing seasons to 20. After being active at last season’s trading deadline, the Bucs added two key Free Agents in the offseason. One of those signings, LHP Francisco Liriano, agreed to 2 YR Deall for just under $13 Million – but broke his arm from an undisclosed injury in late December. The two sides agreed to a deal that lowers the first-season payout if Liriano misses any time due to the injury.

That has not dimmed the enthusiasm swelling around Pittsburgh and very few roster spots are up for grabs as the 2013 season nears. With the Houston Astros moving to the American League West, the division is down to five teams, but the Pirates still have numerous questions surrounding their ability to compete for a Post Season Berth.

END_OF_DOCUMENT_TOKEN_TO_BE_REPLACED

Comments Off on Pittsburgh Pirates Roster in 2013: State Of The Union