The Astros have scaled their Payroll to miniscule proportions. As of this minute, the players they have signed – that aren’t on entry level deals, equals $4.37 MIL, and that is if the club picks up their Team Option on Philip Humber for 2014. The only other player that makes more than an entry level is Jose Altuve at $1.37 MIL in 2014. The club is paying more in dead money to Wandy Rodriguez ($5.5 MIL in 2014) as part of the 2012 Trade worked out between clubs.  It has been bantered about that the ownership and management are willing to spend some money in Free Agency for 2014.  MLB currently does not have a floor for Team Salary in the current CBA, so why would the club do that until they are ready to compete?

A 3rd straight season with 105+ Losses, and 15 straight losses to finish the 2013 campaign does not give the fans very much to look forward to in 2014.

I am here to tell you that the MLB should be ashamed of letting the Houston Astros field such an incompetent team.

Having said this, I don’t personally blame them for tanking it over the last 3 years.  They are the other ‘extreme’ – of what the New York Yankees and LA Dodgers have done payroll wise.

Last season at the end of the year, their highest paid player for the Active Roster was Erik Bedard, making $1.1 MIL.

If they keep picking 1st overall, it is only a matter of time before the team becomes very good, just like the Rays, Nationals, Twins and Pirates have all done in recent times.

For the Up to Date Roster for the Astros all year around, please visit Jeff’s Website right here

For the Entire Page of teams links we have dedicated to Payroll, Rosters, Depth Chart, State Of the Unions and Roster Trees, please click right here. Please bookmark this page and check back, as we are busy on the analysis at MLB Reports always.

END_OF_DOCUMENT_TOKEN_TO_BE_REPLACED

Jonathan Hacohen:  Today on MLB reports we are proud to feature Arizona Diamondbacks Prospect:  Jacob Elmore (Jake).  Originally drafted by the Marlins in 2007, Jake was later drafted and signed with the Diamondbacks in 2008.  Jake just completed his 4th season in the Diamondbacks system, with a 2nd straight year in AA with the Mobile Bay Bears of the Southern League.  During his professional career, Jake has played every position except for outfield.  Yes, he did catch one game and pitched in four games!  Jake’s greatest strengths are his batting eye and speed.  He has shown close to a 1:1 walk to strikeout ratio (career .370 obp) and very good speed (career high 25 stolen bases in 2010 and 15 in 2011).

MLB reports:  Who was your favorite baseball player growing up, that you most idolized and patterned your game after?

Jake Elmore:  My favorite player growing up was Ken Griffey Jr. I loved how he played the game with a big smile on his face. He looked like he enjoyed playing baseball more than anyone I have ever witnessed.  Being as great as he was, that was understandable.  His excellence on the field had a great deal with me admiring him as well.

Jake Elmore:  Chipper Jones would be my pick. I admire how he plays the game and his loyalty to his organization. Many players run for the higher paycheck but Chipper is beloved in Atlanta and has always found a way to make it work there. The player I try to model my game after is Brian Roberts. The tough, gritty approach he brings to the table is admirable and he always finds a way to impact a game.

MLB reports:  Reflecting on your career to-date, what are your proudest accomplishments on the baseball field?

Jake Elmore:  My proudest accomplishment would be winning the “Big Stick” award at the Junior College World Series in Grand Junction Colorado. This award is given to the player with the highest batting average at the World Series that qualifies with ample at bats. I hit .526 and took home the crown.

MLB reports:  Did you fully expect from the start of the draft back in 2008 to sign with the Dbacks?  When was the final decision made in the process to sign with Dbacks?  Any disappointment with being drafted in the 34th round?  What factors led you not to sign with the Marlins back in 2007 when you were originally drafted?

Jake Elmore:  I had no expectation to be drafted in 2008. I was really excited to be drafted at all and feel fortunate to be given the opportunity. I had a really rough time at Arizona State and did not fit in well with that program. I thought there was no way I would be given a shot after the year I had, so when I was taken it brought me back to life and gave me extra motivation. I had no plans to sign with the Marlins after 2007 being such a low pick and a Junior year at Arizona State on the horizon.

Jake Elmore:  My greatest skill on the field would be my versatility and knowledge of the game. I feel that me being able to move all over the field and the batting lineup gives me an advantage against other players. I pride myself on being athletic and multi-faceted. The mental aspect of the game is really enhanced as you progress through a system and being able to adjust mentally is a key to success.

Jake Elmore:  I would love to improve my power numbers and my stolen base success. I am known as a speedy guy, but know that I have been caught far too many times to be considered a top-notch stolen base threat. Power is something all organizations are looking for and I am striving to improve in that area.

MLB reports:  I am very impressed with your displayed ability to get on base during your career.  You have close to a 1:1 walk to strikeout ratio.  How do strikeouts and walks figure into your game?  Do you see any of these items changing over time and to what degree?

Jake Elmore:  The ability to get on base is a key to my success as a player and being disciplined at the plate is the key to obp. Over time I hope to maintain this ratio because I do think it is important. Although, I would sacrifice a few strikeouts for a few more home runs in a season.

MLB reports:  Long term what position do you see yourself playing?  You have mainly played 2b and ss, but also some 3b, 1b, catcher and pitched!  What’s the story on all these positions played?  How do you see defense as part of your overall game?

Jake Elmore:  Well, being versatile is something I take pride in so I make sure all the coaches I play for understand that I am serious about playing different positions. I told the organization I could catch and they laughed and took it in stride. Then when I got the chance to get behind the dish they were surprised that I actually had an idea back there. I caught throughout high school, got recruited as an infielder and catcher, started junior college as a center fielder due to an injury, played both at ASU, and played all the infield positions in pro ball. Still waiting on my first outfield appearance in the pros. As for pitching, I do not pretend to be good in that area but when the game is 17 innings in and our team is out of pitchers….”Jake get loose.” As for my projected position of the future, I would say middle infield is my ticket but the ability to catch can become valuable to my career.

Jake Elmore:  Looking ahead and trying to predict the future can be dangerous and tricky. So… lets jump into the gauntlet. I feel that if I continue to get on base and score runs, playing solid defense and increase my power numbers, I will get a shot in the next few years.

MLB reports:  What do you do for fun when you are not playing baseball?

Jake Elmore:  I really enjoy working out. Not necessarily for baseball but for health in general. I enjoy learning how the body functions and why we do the workouts we do. MW3 is a time waster that I enjoy even though I am average at best. Lastly, I have recently started keeping a journal. I figure one day it will be intriguing to look back and remember what was going on at this time in my life.

MLB reports:  Have you visited Arizona yet?  How did you enjoy Chase Field?

Jake Elmore:  Yes I have visited Arizona many times and have always enjoyed my time there. I have been to Chase Field as well. It is immaculate and gives you extra fuel in the tank to make it to the Show.

MLB reports:  You just completed your second season in AA ball.  Do you know where the Dbacks likely plan to start you this season?

Jake Elmore:  I have no idea about the organizations plans and there is no need to even speculate. I am doing everything in my control to better myself to prove I am worthy of a promotion.

MLB reports:  If you could send out a message to the Dbacks fans, what would it be?

Jake Elmore:  Hopefully I will see you guys soon! 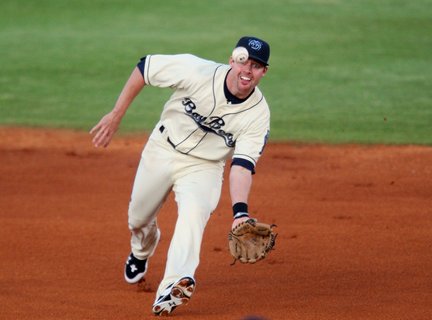 Thank you again to Jake Elmore for taking the time to join us today on MLB reports.  We highly encourage our readers to post at the bottom of the article any questions and/or comments that you may have for Jake.  You can also  find Jake Elmore on Twitter (@JElmo6)

Comments Off on Interview with Jake Elmore: Arizona Diamondbacks Prospect