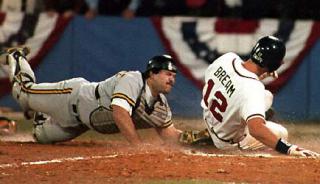 Remembering the moments where both teams had a chance to clinch at the same time. Plus my brother witnesses another grand slam

It is a paying respect Episode 928 of The Sully Baseball Daily Podcast.

The link to my article about clinching can be found here.

END_OF_DOCUMENT_TOKEN_TO_BE_REPLACED

Comments Off on Sully Baseball Daily Podcast – May 9, 2015

The Blue Jays have not qualified for the Playoffs since they won Back to Back World Series in 1992 and 1993. Only Pittsburgh, Kansas City and Toronto have not made a playoffs appearance since the 1994 strike. At the time they were around the top of the MLB Payroll for all teams.

In sifting through 35 years of history with the Toronto Blue Jays as a franchise, it is sad that since 1994, only Pittsburgh, Toronto and Kansas City have not made a playoff appearance in the Major Leagues.  They have been battling the Red Sox and Yankees powerhouse clubs since the 1994 player strike/1995 Lock-out.  This baseball interruption of play was also a  deciding factor on the Montreal Expos losing their franchise, however one could say that this has had a profound effect on the other only team North of The Border.  The Jays were a model franchise all the way through the 80’s.  From 1983-1993, the team carried out 11 straight winning seasons, 5 Pennants and back to back World Series Wins in 1992 and 1993.

Pat Gillick had been with the baseball club from the get go, and after finishing in dead-last for the first 5 years of existence, the Jays rode the backs of several budding stars that were drafted by the man.  From the early pitching stars of Jim Clancy and Dave Stieb, to the young outfield that flourished as a core for years in: Lloyd Moseby, George Bell and Jesse Barfield, the team showed that drafting and trading for young players was the way to build an organization.  It took until 1985 for the teams first Pennant, barely edging the Yankees by 2 games for the AL East.  Playoff disappointment followed from 1985-1991.  The team soon would find the promised land as the top team in 1992 and 1993.