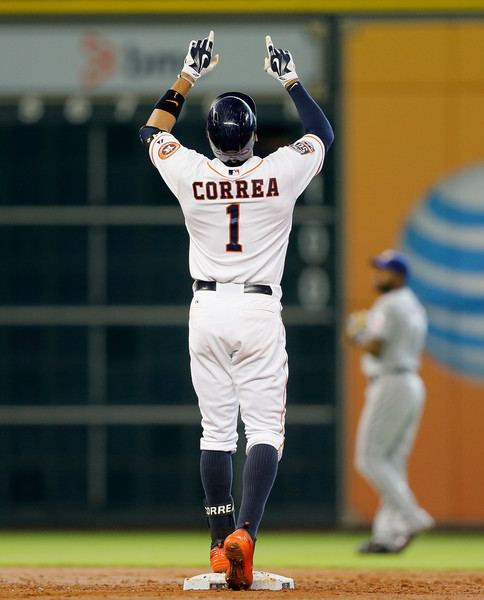 Carlos Correa was the 1st overall pick in the 2012 Amateur Draft for the Houston Astros. He came up in early June and proceeded to win the American League Rookie Of The Year Award with a 3 Slash of .279/.345/.512 with 22 HRs (led all shortstops in the MLB) and 22 Doubles in just 99 Games. This type of production will change the complexion of the team for the next 6 years. He is just going to be 21 for all of next season – and he looks exactly like a young Alex Rodriguez. In his 1st postseason action, Correa smacked 2 HRs in that pivotal game 4 of the ALDS for Houston, staking them to a 6 – 2 lead before the Bullpen gave up the game.

While this was a tough time for the Major League Organization, their Minor League affiliates were thriving. Luckily for the Astros, a lot of their young talent has made their way through the minors and has finally landed in the big leagues.

This youth movement has helped the team drastically. Many baseball experts and fans didn’t predict the Astros to compete in 2015, but they proved them wrong.

In 2015, they made the playoffs for the first time since 2005. They accomplished this feat while having the 6th youngest roster in Major League Baseball (Average age of 26.7 years old).

If the Astros were this successful with a roster with so little Major League experience, then can you imagine what they will do once their talent matures throughout the next few seasons?

END_OF_DOCUMENT_TOKEN_TO_BE_REPLACED

Houston Astros State Of The Union For 2016

The Houston Astros were the worst team in the Major Leagues from 2011 – 2013, where they topped the 100 Loss barrier for each of those seasons, underwent an ownership change, and also moved from the tough NL Central to the AL West. Last year the Astros finally turned the corner with the 2nd Wild Card Spot, won that game in New York and took the KC Royals to the brink of elimination before they lost. They are young, have a core nucleus of team controllable superstars and exceptional depth that they can use for upgrades. It is a great time to be a ‘Stros fan.

The Houston Astros are set to contend for the foreseeable future.  A 6 year stretch in which they revamped their entire Minor League System – and kept payroll down to grab top Draft Picks finally reeled in the teams 1st playoff spot in a decade in 2016.

After taking a 6 – 2 lead in Game 4 of the ALDS series against the Royals with  2 – 1 lead the Bullpen coughed up the margin – with the club also losing the next game to the eventual World Series winner.

It was a tough lesson to learn in the postseason – but it may be the 1st of many appearances in October in the near future.

The #1 task of acquiring a lock down Closer has been addressed in the recent trade for Ken Giles.  Yes it cost them Brett Oberholtzer, former #1 overall Draft Pick Mark Appel, and a few other prospects, but it also sets up the nucleus core for 4 – 5 more years.

The clubs offense featured 11 guys with double digit Homers in the lineup, and 2 others that fell just a dinger shy of the clip. END_OF_DOCUMENT_TOKEN_TO_BE_REPLACED