Canadian MLB Expansion Or: Should The Jays Play At Least 1 Series In Vancouver + Montreal Per Year?

Olympic Stadium was a building catastrophe from the get go. It was a contributing factor of the Expos leaving Montreal. Having said that, it would have been really cool if the MLB were to at least designate the Canadian stadium to host some regular season games in the next few years.

I must be out of my mind right?

Having the Toronto Blue Jays play in Toronto, Montreal and Vancouver  allduring a regular season – and re-brand the club to a national team in the MLB?  But stop and think about this for a minute.

The club as drawn almost 100K total fans for the 2 exhibition games in Quebec during the last 2 years in exhibition series right before the season started.

Why not play some games in Toronto, Montreal and Vancouver – and rename the club the Canada Blue Jays?  Okay.. that is a little drastic here.  Keep them the Toronto Blue Jays, but what would be wrong with selling 40K+ fans a game for 12 total games?  Maybe 6 games in each city.

Since the MLB insists on having 19 Divisional games a year – with 3 series in each city, would it be that bad if the Tampa Bay Rays or Baltimore Orioles were to visit Montreal to play the Blue Jays  a series?

Or how about and grow the brand on the West Coast by playing a 3 game set at BC Place Stadium followed up with Toronto heading down to Seattle right afterwards for another series? 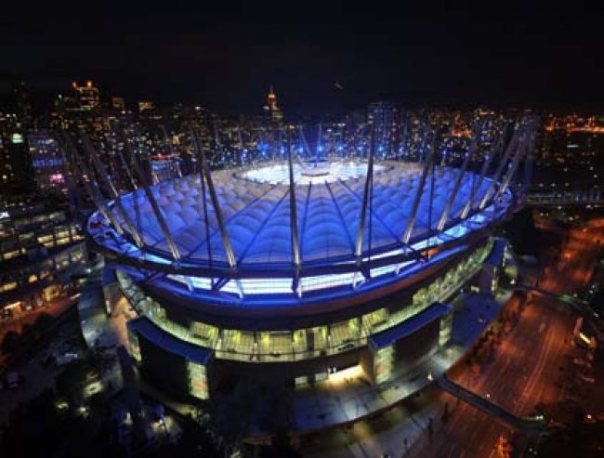 Newly renovated BC Place Stadium, with $600 Million Dollars in upgrades, re-opened on Sept.30/2011 with modern amenities –  and features a 100 by 85 retractable roof.

The lights also illuminate different colors both inside and outside of the building. The stadium could be converted to meet MLB specifications.

The Lower Mainland has 4 Million People to draw from and a growing baseball fanbase.

In the last 20 years, Larry Walker, Ryan Dempster, Justin Morneau. Jeff Francis, Brett Lawrie and James Paxton have all come from the area.  While it may not be able to sustain a full attendance over a full year, this place could net the Blue Jays some cash if they were to play some games there each campaign.

On the surface, again people might say I am nuts.. but consider this.

Olympic Stadium while serviceable, is not a beacon of greatness to play in.  During the last couple of seasons with the MLB, it was tough to draw well with the Expos.

There is no doubt the city was jobbed by Jeffrey Loria and sold a bill of goods by the league as well.  if you want to read and hear more about that, click here.

The stadium issues still presents itself prominently.  There is no way a team could move to Montreal longterm – and play out of that facility.

Building in any new park in Montreal is also pipe dream.  Between the park and a team relocation – or expansion, you are talking a Billion Dollars.  A tough maneuver to privately finance, and no way to be done privately.

Even if you can cram those scenarios, there is no proof you could have sustainable success in the city.

Among the problems the team had when they left were Broadcast rights.  With more than half of the population speaking French – and nearly half English, you need to have 2 main rights holders for TV.

The second problem is that the Jays have cornered the market for a decade, and are owned by the Rogers Media Group.  Having 2 Eastern Time Standard Times would cut into ratings for one for sure.

Another problem back a decade ago – that has resurfaced again is the Canadian Dollar.  Canada’s teams take in revenue in Canadian Dollars and pay out player salaries in U.S. Funds.

When Montreal left the MLB in 2005, the dollar was about .75/every US Dollar, and it has been near par for the last half-dozen years, before recently trending downwards again – hovering at about 75 cents right now.

Without any equalization payments given by the MLB, it would make it tough if this trend continued.

There is no doubt it would be cool for the Expos to return to the MLB, it just wouldn’t come via this route.  But to host 3 – 6 games a year would be super for the city of Montreal – a long with being a nice boon for attendance.

BC Place has been retrofitted with incredible renovations that feature spacious seats, a huge modern scoreboard, and a football sized retractable roof that beams down sun in the summer.

BC Place used to hold exhibition games in the mid 90’s for Seattle, but haven’t come back since Edgar Martinez tore his knee up on the old Astroturf.  The field surface has now been updated with “Field Turf.”

So that Vancouver and Montreal don’t work individually, and since Toronto doesn’t sell out every game at the Rogers Centre right now, why not play some games abroad?  It may help drive the Television Ratings up more in the long run across the nation.

Proposed 12 Games abroad for the Jays per year

Not that any of these would ever happen.  But the fact we can even entertain the thought is due to the previous 2 exhibition years with Montreal being so successful

Traveling baseball fans would love to go to all 3 parks. These venues have held championship matches in the Canadian Football League – and would be huge events to host regular season MLB games.

The Blue Jays drew almost 100K fans in the two exhibition season games in Montreal. At the very least, why not host a few series in early April to help drive up attendance?

Olympic Stadium could host a series versus the Rays/Orioles, or you could make it more accessible to the New York and Boston fan bases – by hosting series against the Red Sox and Yankees.

Both cities are about a 7 hour drive from Montreal.  The Blue Jays could really cash in on the whole country rallying behind one team.

In the other 69 – 75 games, I am sure the attendance per game may be boosted by the smaller amount of games on they schedule.