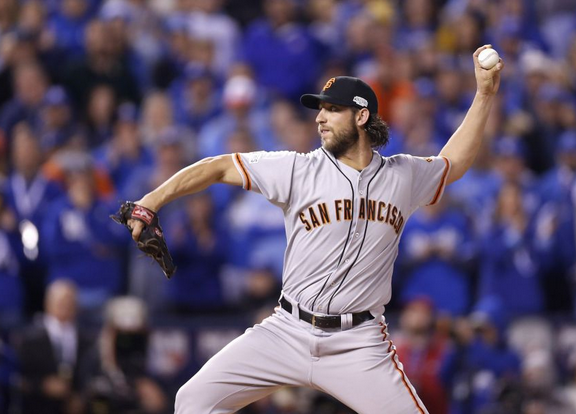 So October 2014 is officially owned by Madison Bumgarner. Savor this amazing post season.

Each winning team for every post season game gets a pitcher and a hitter who earn a full WOO (Who Owns October.)

And at my discretion, I award a 1/2 WOO’S to a worthy player on the losing team.

It is important to separate Postseason and World Series accomplishments. It is the purist in me.

Madison Bumgarner finished his historic post season with 5 shutout innings out of the bullpen, holding Kansas City to 2 hits and clinched the World Series for the Giants with a 3-2 win.

Pablo Sandoval capped off a marvelous World Series with a 3-3 performance, reaching base 4 times, scoring twice played solid defense and caught the final out as the Giants took Game 7, 3-2 in Kansas City.

Alex Gordon went 2-4, scored a run, drove in a run and hit the dramatic 2 out hit that took him all the way to third in the bottom of the 9th. He was stranded as the Royals fell 3-2 to the Giants.

Kelvin Herrera pitched the Royals out of trouble with 2 2/3 shutout innings of relief, striking out 4 and walking none. San Francisco would hold on to win, 3-2.