Even With The Awesome Farewell To Jeter, There Are Others Who Are Hanging Up The Cleats This Year

Paul Konerko announced that the 2014 season will be his last. Konerko has 439 career HR, 1412 RBI, and 6 All Star appearances in his 18 year career. What will most likely not be a HOF career, will certainly go down as one of the best in White Sox history. Konerko was the direct replacement for Frank Thomas.He is only 16 HRs behind Thomas for the White Sox franchise record. Konerko, now 38, was a 1998 trade acquisition – with OF Mike Cameron going back the other way. while Cameron was a nice Major Leaguer in his time. Konerko should have his number retired by the club, and is the 2nd active leader for HRs hit for just one team.(432 HRs) to Albert Pujols (having hit 445 HRs with STL).  His 3 Slash Line for his career is .279/.354/.487 – and he has collected 2340 hits.

1st off, mad respect to Derek Jeter, for giving everyone a last night to remember on Thursday.  He embodied what a class act superstar should be his whole career.

The MLB world is fully justified to praise him as much as they want. So the ‘hater’s’ will just have to suffer.

I am happy to see a lot of our brethren of website writers all chime in some of the other guys hanging them up too.

Paul Konerko is about us unheralded as their is for a near Hall of Famer these. days.  He is second actively when it comes to HRs for a select team, with his total of 432 bombs for the White Sox.  Only Albert Pujols‘s 445 HRs for the Cards is more.

Only David Ortiz has hit over 400 HRs for one active team besides Pujols and Konerko..

It is only too bad, that the big 2005 World Champion, saw a lot of his power evaporate before he passed Frank Thomas‘s career mark of 448 big fly’s for the franchise.

Still, #14 will be missed, and I definitely will be watching on my computer, with it being “Paul Konerko Day” today (Saturday Sept.27th) at Us Cellular Field.

Adam Dunn has 6 40 HR campaigns to his credit, and 9 30 HRs years overall. He leaves the game being about 40 HRs short of 500. As the Active Strikeout leader at 2376 (3rd ALL-Time), he also would have ran down the career mark set forth by Reggie Jackson at 2597.  The “Big Donkey” will also play his 2000th game on Saturday, and may have a chance to reach the postseason for the 1st time in his career.  He holds the longest active games played for not playing in playoffs.

Nice to see that Dunn may finally enter a postseason game, as he has never up to this point in his MLB Lifetime.  If the A’s can manage a win in the next 2 games, or Seattle loses one, than Oakland will matchup against the Tigers or Royals in the Wild Card Game.

If by some chance, the M’s win their next 2, and the Athletics lose both Saturday and Sunday, it would force a game 163 at Safeco Field on Monday.

Whatever happens, the “Big Donkey” will have a chance to play beyond the regular season ever.

He has said he is hanging them, up and the world will truly miss one of the great HR hitters of our generation.  A man who has 9 30+ HR campaigns to his credit, and he proved all skeptics wrong after his brutal 2011 year.

This website has often pointed out that tall/heavy players have a tough time with their plate coverage heading into their mid-30’s  Think of Richie Sexson, Cecil Fielder, Mo Vaughn, Tony Clark and even Mark McGwire even (would have been quicker without the juice).

These men has such a fast fall from nice production, one has to consider that their weaknesses were exploited.  Perhaps Dunn knows that is increasingly becoming difficult to have his big frame connect with the ball.  His numbers certainly reflect that.

You have to give David Ortiz that much more credit, that he can continue to pulverize the baseball at an advanced age.

Willingham has fought through various injuries the last three or four years, and at 35, has said to have been packing it in after this season.  At least it will be on playoff.

He still has clubbed 14 HRs and added 40 RBI between the Twins and Royals this year. but he just can’t stay in the lineup

Having taken some AB this season, Abreu is leaving the game of baseball, as the active Walks (1475) and Doubles (574). His 1 SB this year gives him a smooth 400 even for his lifetime, despite also being the active leader for being caught (128). the longtime Phillies player, has 2469 Hits and has been to the plate 10078 times. Abreu made 2 ALL – Star Games, and collected both a Gold Glove and Silver Slugger Award.  He will go into the “Hall of Very Good”

Abreu is a shell of his former self, although he can still draw a walk decently, and his .336 OBP is actually welcomed in the Mets Lineup.  He is also known better for struggling after a HR Derby, rather than one of the most consistent 5 tool players in the game for his generation.

Abreu has 931 Extra Base Hits in his career, that is a lofty total for anyone.

He almost hung up his boots after last year, but money definitely brought him back for 2014.  The Phillies are probably now wishing he did.

The “Phigtins” will likely decline his Team Option of $15 MIL, which would give Burnett a $1 MIL Buyout, or he can trigger a salary (Player Option) of $7.5 MIL for next year.  He may just go home for good.

286 HRs for the man, and a character in the movie Money Ball is nothing to snicker at.  He has struggled at the dish for the last 3 years, and couldn’t even stick in the lineup with the Rangers this year. (.428 OPS in 58 AB for TEX in 2014).

He s regarded as one of the 10 best players to ever suit up for the Tampa Bay Rays, and his arrival coincided with the team turning it around.

One of the most unlikely professional hitters of all time.  Had 1000 RBI from 2002 – 2012, when he was over 30 years old.  His time has to end.  After bashing out 29 HRs last year, this year went down poorly for Raul.  He will probably be left off of the KC postseason roster.

Ibanez has 305 HRs, which has him tied for 132nd ALL-Time in baseball with David Justice and Reggie Sanders, guys who were no slouched at the plate.

The 3 time Mariner also had 8 20+ HR seasons, and was a deadly hitter in the Postseason for the Phillies and Yankees, with 6 HRs and 22 RBI in just 139 AB.

Certainly this has to be it for the 43 year Old DH.  He has pretty much been a player coach for the “Tribe” already, and should make that transition easily.

Giambi hung around the game the last half of a dozen years by transforming himself into a nice DH/PH – who took professional AB, and could still turn one lose.

The 39 Year Old nearly reached the 200 IP barrier with the “Pinstripers” with 199 Innings logged, and was the only opening day starter to complete the year on the club, and he was the oldest member of the rotation.

It is possible Kuroda could pitch for one more year. but it would be either the Yankees or the Dodgers, and LA maybe a better chance.  The RHP may even pitch back in Japan for his swan song.

Will the man finally give up on playing baseball after this year.  Pierzynski has already been doing TV Analyst work for several of the last years during PostSeason, and would have no problem making it a permanent transition,

I personally believe he could be a great backup backstopper for a contending team, like he is presently with St. Louis, but he may just not want to do that.

A career .281/.320/.424 – with 177 HRs and 837 RBI, shows he has been one of best and consistent Catchers in the American League the last 9 years.  Add a nice playoff resume to the pile, and he was probably vastly underrated during his time.

A clutch player for sure, even if he was a redass.

At age 40, he doesn’t have a contract for next year, but based on his decent 2014 campaign, as the 4th OF in the Bronx, you have to think he will earn a deal for 2015.  The man is still in great shape.  Read our article about him this week seeking the professional hits record here.

At age 39, Hunter may decide to retire if the Tigers win the World Series.  If the Motown Boys fail to cash in on their season, you have to think the team could afford to bring back the veteran for another year.

I am hoping the topic was broached by GM Dave Dombrowski. otherwise the Austin Jackson for David Price deal, will hurt their depth beyond the grass next year.

I still do the deal all day, as having Price on the roster for 2015, is a perfect replacement for Max Scherzer, however it just thins out the club for next year.  Maybe Andy Dirks can come back healthy, and J.D. Martinez will take regular AB all year in 2015. 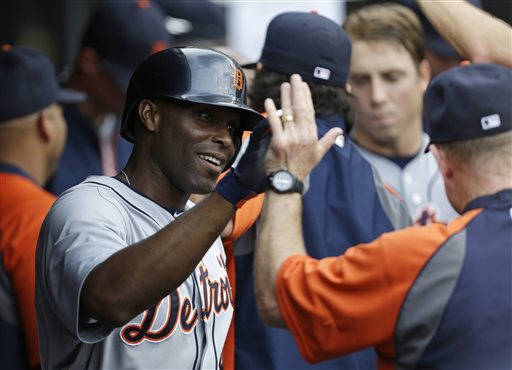 Torii Hunter has had a great career with the Tigers, Angels and 1st off with the Minnesota Twins. At age 39. would he retire if Detroit wins the World Series?  He is a veteran of over 18 years, holding an OPS of .799.  Hunter is not far off of his career totals with an OPS of .772 this season.  Hunter has 331 HRs, 1309 RBI and has amassed over 2326 hits in his brilliant career thus far.  He doesn’t have a contract for 2015 yet, but if he wants to play, there will be a lot teams  wanting to call him,