← Billy Beane’s Decision To Not Extend Mulder, Zito And Hudson Was The Right One: Money Ball At Its Best
Sully Baseball Daily Podcast – April 16, 2014 →

Oakland Athletics Roster In 2014: How All Of The Pitchers Were Acquired 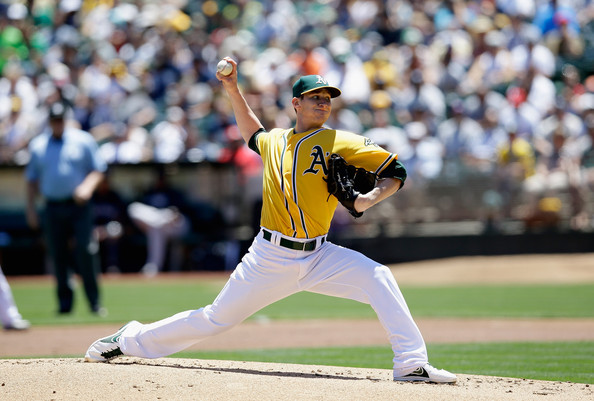 Jarrod Parker is out for the year with Tommy John Surgery. You are talking about a guy that was 25 – 16 with a 3.68 ERA over the last 2 years combined. He has top of the rotation stuff and will be greatly missed. The A’s also had a TJ scare with A.J. Griffin, but it has been downgraded to an elbow strain for now. Parker was traded for by the Athletics in a major package sent to Oakland with Collin Cowgill and  Ryan Cook for Starter Trevor Cahill. The club still has Parker and Cahill.  While it is bad Parker is out in 2014, he will be back. Cahill has been ineffective for the D’backs in 2014 – with a 9.17 ERA and an MLB leading 4 losses.

I just finished writing an article about how Billy Beane was smart not to have signed Barry Zito, Mark Mulder and Tim Hudson to extensions here.

You really wont find him do this anytime soon with any of his chuckers.

The Scott Kazmir deal is the one he likes to do.  It is simple as to why the man operates like this.  He doesn’t have to give up any assets in the process.

Beane is a “Baseball Rounder”.

We will go through the Pitching First, and then the hitting by the weekend.

A.J. Griffin would have been the ace of this staff, and I would have projected a 16 – 10 record and a low 3 ERA if he wouldn’t have come down with injury. With a strained elbow, I am leery of placing any projections on the man. At 26, he would have been entering his 3rd year in the bigs.  Griffin has been a solid contributor on the last 2 AL West Title runs.  He has amassed a record of 21 – 11, with a 3.60 ERA in 47 Games Starts.  Beane stole this guy in the 13th Round of the 2010 MLB Amateur Entry Draft.

Pitcher:  Relief or Starter, Age and any significant stat/Transactions in reverse from trades, all players in the tree will be separated by semicolons:

Brad Peacock (26) RP:  February 4, 2013: Traded by the Oakland Athletics with Chris Carter and Max Stassi to the Houston Astros for Jed Lowrie and Fernando Rodriguez.

See the Hitters (this weekend) for Jed Lowrie and Josh Reddick breakdowns.

Chris Carter (27) Is part of that mega deal listed below.

Max Stassi (23) DH/C: Drafted by the Oakland Athletics in the 4th round of the 2009 amateur draft.

Fernando Rodriguez (29) RP:  Is only the teams depth chart in the Minors and may see some action with Oakland this year

So essentially you had Reddick, Norris, Milone and John Jaso (acquired  for A.J. Cole (Minors), who with Krol and Treinen.) along with Andrew Bailey, Nick Swisher and Robert Gilliam (8th round Draft of Oakland A’s 2009 year).

Swisher played poorly for the White Sox, and Bailey has never lit it up with the Red Sox either.

This is one is a pretty fair deal if you ask me.  Please see this trade reactor on the hitter’s side under Josh Reddick.

Andrew Bailey (29) RP:  Drafted by the Oakland Athletics in the 6th round of the 2006 amateur draft.

Derek Norris and Josh Reddick see the hitters writeup.  I am only adding the Jaso part to the below portion.

George Kottaras (30) C:  January 25, 2013: Selected off waivers by the Kansas City Royals from the Oakland Athletics.

Ian Krol (22) RP: Drafted by the Oakland Athletics in the 7th round of the 2009 amateur draft.

Blake Treinen (25) SP:  Drafted by the Oakland Athletics in the 7th round of the 2011 MLB June Amateur Draft.

This works out to be John Jaso for the 3 players (2 they drafted and one player who they picked up (Cole, in the Gonzalez deal).

A.J. Cole is still in the Minors, whereas Blake Treinen is in the Bullpen for the start of the 2014 year at least.

1. Cowgill was traded with Ryan Cook and Jarrod Parker for Trevor Cahill, Craig Breslow and cash.

2. Breslow was picked off of waives by the A’s from the Minnesota Twins for no compensation.

Jefry Marte (23):  Has been playing at AA Midland, and is starting to hit better.

Jarrod Parker is out for the year with Tommy John Surgery, however he holds a 25 – 16 record with a 3.73 ERA thus far.

Collin Cowgill only had a .654 OPS in 104 AB with Oakland before his trade to the Mets.

Drew Pomeranz (25):  December 10, 2013: Traded by the Colorado Rockies with Chris Jensen (minors) to the Oakland Athletics for Brett Anderson and cash.

Connor Robertson (32) RP:  only ever played in 6 games the rest of his career, sporting a 5.14 ERA for the Dbacks.

Aaron Cunningham (28) OF : January 16, 2010: Traded by the Oakland Athletics with Scott Hairston to the San Diego Padres for Kevin Kouzmanoff and Eric Sogard.

Hairston never had played exceptional for the A’s, and the trend continued for the Padres too.

Gallagher of course, was brought to the A’s by the Rich Harden deal explained later in this article.

Craig Italiano (27); RP:  Drafted by the Oakland Athletics in the 2nd round of the 2005 MLB June Amateur Draft.  Never played in the Majors.

Kevin Kouzmanoff (32) INF:  August 23, 2011: Sent to the Colorado Rockies by the Oakland Athletics as part of a conditional deal.

At least the club still has 2B Eric Sogard left for this bevy of transactions.

Carlos Gonzalez November 10, 2008: Traded by the Oakland Athletics with Greg Smith and Huston Street to the Colorado Rockies for Matt Holliday.

Greg Smith only pitched to a 6.23 ERA in his time with the Rockies.

Now Carlos Gonzalez is a mega star in Colorado, Dan Haren was the guy used to acquire him from Arizona, and the organization still had Brett Anderson left over from the same deal.

July 24, 2009: Matt Holliday was Traded by the Oakland Athletics to the St. Louis Cardinals for Clayton Mortensen, Shane Peterson and Brett Wallace.

December 18, 2004: Traded by the Oakland Athletics to the St. Louis Cardinals for Daric Barton, Kiko Calero and Dan Haren.

Greg Smith only pitched to a 6.23 ERA in his time with the Rockies.

In this whole train of transactions, the A’s ended up with Drew Pomeranz, Daric Barton,  Eric Sogard, Jed Lowrie, Michael Taylor  and (Shane Peterson with AAA Sacramento), plus only lost Huston Street and Mark Mulder for it (and Connor Robertson-Minors), as pieces of the initial Mulder deal, (Dan Haren) was also used to acquire Carlos Gonzalez.

Gonzalez was used to acquire Holliday as the main piece.

Brett Wallace was the main part coming back from Holliday in the St. Louis trade, and he was later flipped for Michael Taylor from the Blue Jays.

The A’s have 5 players on the current 40 Man roster to claim for this cycle of events and Shane Peterson in the minors (Part of the Cards trade to acquire Holliday.)

Shane Peterson (26) OF: is with Sacramento – and may be part of the team at some point.  Peterson made his MLB Debut a year ago today.  In his 2nd game he collected his 1st hit and RBI.

Holliday was never going to sign long-term with the A’s. He has done well with the Cardinals, and it took a 7 YR deal worth $120 MIL to retain his services.

Wallace was traded for Anthony Gose for the Blue Jays soon after he was acquired by the Jays. Which was a good idea

Street was taken in the 2004 Draft as a Sandwich Round pick for losing Miguel Tejada to the Baltimore Orioles in FA.

Dan Otero (29); March 27, 2013: Selected off waivers by the Oakland Athletics from the New York Yankees.

Luke Gregerson (29):  December 3, 2013: Traded by the San Diego Padres to the Oakland Athletics for Seth Smith.

Seth Smith (31) OF/PH:  January 16, 2012: Traded by the Colorado Rockies to the Oakland Athletics for Guillermo Moscoso and Josh Outman.

2.  Outman was traded by the Phillies with Adrian Cardenas, (Cardenas was later picked off of waivers by the Cubs) and Matt Spencer (Now in Cubs system) for Joe Blanton (A’s 1st RD Draft Pick in 2002)

3.  Moscaso was acquired by the A’s in 2011 for Ryan Kelly. Moscaso had one poor year in Colorado before being selected off of waivers.

6.  Murton came over with Josh Donaldson,  Sean Gallagher and Eric Patterson from the Cubs for Chad Gaudin and Rich Harden (Drafted in the 17th RD of the 2000 Draft.

7.  Gaudin was traded to the A’s by the Jays for by Dustin Majewski (drafted in the 3rd Round of the 2003 Amateur Draft.)

8.  Gallagher was sent to the Padres for Scott Hairston Jr., who was traded back to San Diego for Kouzmanoff and Sogard.

9.  Patterson was traded to the Boston Red Sox for Fabian Williamson.

Williamson was later claimed by the Rangers off of waivers.

So basically Gregerson and Josh Donaldson is all the club has left out of Joe Blanton, Rich Harden and Dustin Majewski.

Still Harden and Blanton are retired now – and Majewski never made the Majors.

Fernando Abad (28): November 25, 2013: Traded by the Washington Nationals to the Oakland Athletics for John Wooten (minors).

This trade is yet to be analyzed to the fullest extent, however when you add Cook with Parker, it is looking favorably for Oakland so far.

Breslow was a waiver wire pick up for Beane off of Minnesota.  He was traded by Arizona to Boston for Matt Albers.

Cook is one of the better late inning relievers in all of Baseball.  Bravo Mr. Beane.

Sean Doolittle  (26):  Doolittle was drafted in the 1st round of the 2007 Amateur Entry Draft.

Evan Scribner  (27)   Scribner was plucked off of waivers from the Padres at the end of the 2011 year.

Jesse Chavez  (29):  This cost the organization nothing as they claimed the Canadian off of waivers from the Blue Jays.

David Freitas (25)  C/1B:  August 3, 2012: Traded to the Oakland Athletics for cash to the Washington Nationals and Kurt Suzuki.

Transaction Dates Provided by the best website in the world, http://www.baseballreference.com

Sonny Gray’s importance to this A’s pitching rotation is even more relevant with Griffin and Parker out. So far in 3 outings, he has a 0.93 ERA in 19 IP. This carries his career numbers to a 7 – 2 record and a 2.28 ERA in 13 Game Starts. This 24 Year Old from Nashville TN, is making good on his 18th overall selection in the 2011 MLB Amateur Draft.  Gray isn’t even Arbitration Eligible until 2017, and is only a Free Agent after the 2019 season.  He will be in the Bay Area for many years to come.

← Billy Beane’s Decision To Not Extend Mulder, Zito And Hudson Was The Right One: Money Ball At Its Best
Sully Baseball Daily Podcast – April 16, 2014 →
Loading Comments...