Eddie Mathews held the record for HRs by a 3rd Baseman until it was broken by Mike Schmidt. The man is tied for 12th in ALL – Time HRs for one given teams (The Braves – (493) with Lou Gehrig of the New York Yankees. ) He was a 9 Time ALL – Star and finished 2nd in MVP Voting for the years of 1953 (Campanella) and 1959  (Banks).  It was those same two years in which he led the NL in HRs.  The man from Santa Barbara California also led the NL in Walks for a year on 4 separate occasions.  His 3 Career Slash Line was .271/.371/.885 in 17 years with the Braves, Astros and Tigers.

MLB Reports:  We are pleased to present you with Baseball Author Lee Edelstein as the newest writer with us at the Reports.  Lee will be providing us with great stories about baseball memorabilia on a regular basis.

Trivia question: who is the only person to play for the Braves franchise in all three of its locations – Boston, Milwaukee, Atlanta? That’s right, Eddie Mathews. And what a Brave he turned out to be – a Hall of Famer, the second greatest Brave of all time (behind Aaron), and the person who redefined the position of Third Base.

Eddie Mathews reached the majors as a twenty-year-old, in 1952. It was the franchise’s final year in Boston and he hit 25 Home Runs, three in one game, and finished third in Rookie-Of-The-Year voting. They should have given him the award – he followed his freshman campaign by smacking 47 HRs to lead the Majors – while driving in 135 RBI. He would hit 30+ Home Runs for nine straight years.

Mathews and Mantle were synonymous with their HR totals from the time they both joined the league.  Mathews hit 477 HRs in his 1st 14 years as a pro – where Mantle hit 454 HRs in his 14 seasons.  The difference was the amount of more times that Mantle Walked – leading to  .977 Career OPS – as oppose to Matthews (.885 OPS), plus the Batting Averages also favored the Mick’s (.298) to Mathews (.271).  Mantle was also a 3 time AL MVP – and 3 time Runner Up – while the lanky 3rd Baseman featured just 2 Runner – Ups, with having to contend yearly with the likes of Willie Mays, Ernie Banks and Hanks Aaron and Stan Musial in the NL.

Eddie Mathews and Mickey Mantle were contemporaries and there are interesting parallels between their careers:

In addition to the similar stats, they were handsome sluggers who hailed from the same area of the country – Mathews from Texas, Mantle from Oklahoma.

Both were the personification of the All-American boy. Of course, Mantle, who was the better all around ballplayer, benefitted enormously from playing in New York and for the best team in baseball.

But Mathews was tremendously popular in his own right. In 1954, it was Eddie Mathews who was chosen to grace the cover of the first edition of a new magazine, Sports Illustrated.

Mathews revolutionized the position of Third base which, with a few notable exceptions (Baker, Traynor, Kell), had been considered for years as a place to park lesser players. Mathews was a revelation at third, combining fence busting power with defensive acumen. He set the standard that future third basemen have tried to emulate.

Of note, Mathews sits in 2nd place ALL – Time for HRs for 3rd Baseman still to Mike Schmidt.

Eddie Mathews won the World Series with the Milwaukee Braves in 1957, before capping off his Hall of Fame Career with the Detroit Tigers and their 1968 World Series Win.

In 1999, the Sporting News ranked Mathews #63 on their list of the 100 greatest ballplayers of all time. Perhaps the ultimate compliment to Eddie Mathews came from none other than Ty Cobb – “I’ve only known 3 or 4 perfect swings in my time. This lad has one of them.”

Eddie Mathews also holds a special place in the world of baseball memorabilia. His rookie card from the iconic Topps 1952 series is extremely difficult to find in top condition.

That’s because his was the last card in the set. Why does that make it more difficult to find in excellent condition than others in that set? Because as kids we carried our cards with us wherever we went and to secure them we’d use a rubber band to hold them tight.

Well, that rubber band took its toll on the first and last cards of every set, leaving many fewer of those cards in top condition. That’s why Eddie Mathews’ card, in mint (grade 9) condition sells for a cool $100,000 (Andy Pafko, the number one card in the ’52 Topps set, goes for $150,000 in mint condition.)! 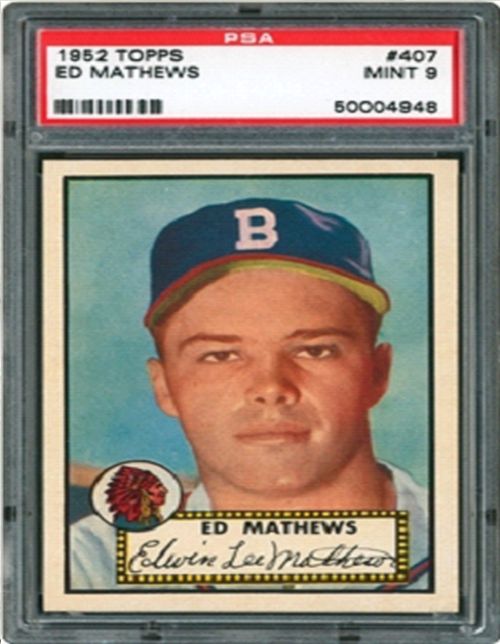 Do you have any Eddie Mathews memorabilia – let us know!

***The views and opinions expressed in this report are those of the author and do not necessarily reflect the views of mlbreports.com or their partners***

A big thank-you goes out to Our ‘Baseball Memorabilia Enthusiast’ Lee Edelstein for preparing today’s featured article. Lee was born and raised in the Flatbush section of Brooklyn, New York.  He inherited his love of baseball from his dad. The game has been Lee’s constant companion since he was seven years old – when his dad took him to see his first ball game at Ebbets Field.   This was followed by a brief and largely unsuccessful Little League career.  While he wasn’t all that good on the ball field he became an ALL-Star at collecting baseball cards.

His collection is still alive today after surviving many scares over the years. Lee was also much better at business than playing baseball.  He was good enough that he was able to retire and pursue his other passion – writing about baseball! Chin Music is his first novel. He is hard at work on his second, Mound Music. You can read a full overview and find links to purchase here and also check out a quick synopsis in the picture below.  Feel Free to follow Lee on Twitter and chat about the game of baseball.  Follow @chinmusicstory 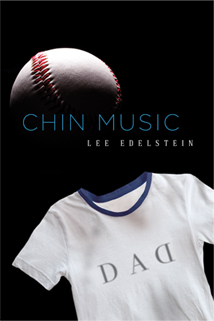 Sixteen-year-old Ryan Buck is a talented athlete who was fortunate to escape with minor injuries from the horrific car crash that devastated his family. Two-and-a-half years and countless hours of therapy later, Ryan still can’t remember a thing about the accident and it’s making for agonizingly slow progress. But everything changes when his mom, Susan, is forced to sell the old Babe Ruth artifacts that have been in the family for years.