The Legacy of Chris Carpenter: Savior in St. Louis 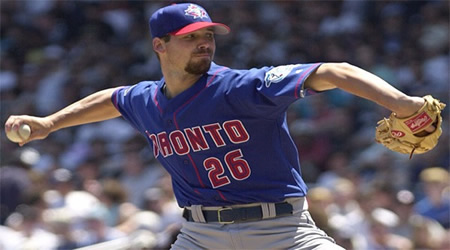 Chris Carpenter started his career in Toronto after being the 15th overall selection in the 1994 draft. After the 2001 season, the Toronto Blue Jays made a calculated decision not to offer Carpenter a major league contract. He elected for free agency, rather than pitching in the minors for Toronto, and his legacy in St. Louis began when the Cardinals picked him up.

The legend of Chris Carpenter started as a 19-year-old pitching for the Medicine Hat Blue Jays in 1994.  He was the 15th overall pick by the World Series Champion Toronto Blue Jays in the 1993 draft.  He was a physical specimen built to stand atop a 9.5” hill and stare down at hitters as they stared back at his 6 foot, 6 inch frame.  Drafted out of Manchester, New Hampshire, the 19-year-old already had a plus fastball and a nice curveball.  By 1997, at the age of 22, Chris Carpenter had broken into the Toronto Blue Jays rotation and was pitching against the best hitters in the world.

As a mid-season call up in 1997, Carpenter struggled in Toronto, hosting an ERA above 5.00 and a record of 3-7 over 13 games.  His role in Toronto was mostly to eat innings, and he was there to gain experience and hopefully blossom into what the Blue Jays brass new head could be.  He was in a rotation that consisted of the 1996 AL Cy Young winner Pat Hentgen, as well as the 1997 AL Cy Young winner Roger Clemens, so he had some serious  mentors to help guide him on breaking into the big leagues.  Despite his amazing talent, Carpenter struggled for most of his first season in Toronto and was eventually moved into the bullpen.  In 1998 however, he emerged and gave everyone at least a glimpse  of what would eventually come of Chris Carpenter, while proving himself to already be a competent starter capable of winning games.  He led the Toronto Blue Jays (tied with Pat Hentgen) with 12 wins in 1998, and continued to pitch well into 1999…at least until he became cursed by a spell of injuries. 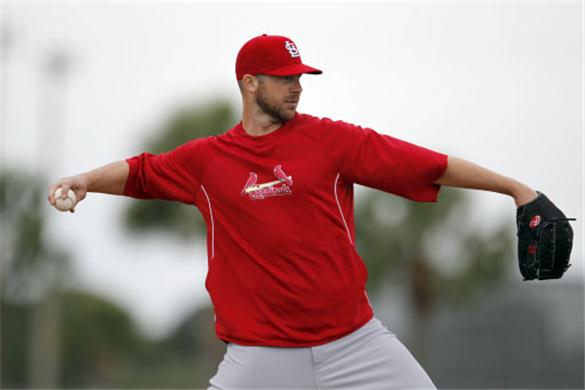 Carpenter warming up while rehabbing another one of the many injuries that have plagued his career.

A smorgasbord of arm injuries plagued Chris Carpenter for the entire 2000 season, and when he was healthy enough to actually take the mound, his performance suffered greatly.  When he returned in 2001, his pitching was very erratic.  He would pitch a gem, followed by a disaster, and it seemed like his durability was really in question.  All of a sudden, in the second half of 2001, the Chris Carpenter that we know showed his face.  Chris Carpenter was named as the ace of the Blue Jays pitching staff in 2002, followed closely by another young pitcher, named Roy Halladay.

After earning his spot as the Blue Jays number 1 starter, more injuries and under-performance found Chris Carpenter.  He was quickly falling out of favor in the eyes of the Blue Jays organization, but there was a definite hesitance to give up on someone with such amazing talent.  In what would prove to be a poor decision (hindsight is 20/20), the Blue Jays removed Chris Carpenter from the 40-man roster in Toronto, and tendered him a minor league contract.  When he rejected the minor league assignment, he effectively became a free agent, and the St. Louis Cardinals opted to take a chance on the young arm.  We know that Chris Carpenter would go on to meet his potential during his time in St. Louis, winning the 2005 Cy Young award, and placing 2nd, and 3rd, in the 2009 and 2006 (respectively) Cy Young Award ballots.

The Carpenter legacy is certainly one that entails a lot of great feats.  He was one of the most feared pitchers in all of baseball from 2005-2010, and proved himself to be nearly unhittable in many situations.  One of the times where he was absolutely unhittable, also happens to be one of the greatest pitching duels in baseball history.  And Chris Carpenter emerged as the winner.

This game was the heralded game 5 of the 2011 NLDS.  The Cardinals had just barely squeezed their ways into the playoffs after winning a wild card tie break game, and after getting through the division series, they were competing with the biggest and baddest lineup in the national league: the Philadelphia Phillies.  The series ultimately found itself tied at 2 games a piece and in a do or die game 5.  Undoubtedly, with the season on the line, both managers put their aces on the mound to start the game.  All Chris Carpenter had to do was pitch better than the best pitcher in baseball (and his former teammate), Roy Halladay. 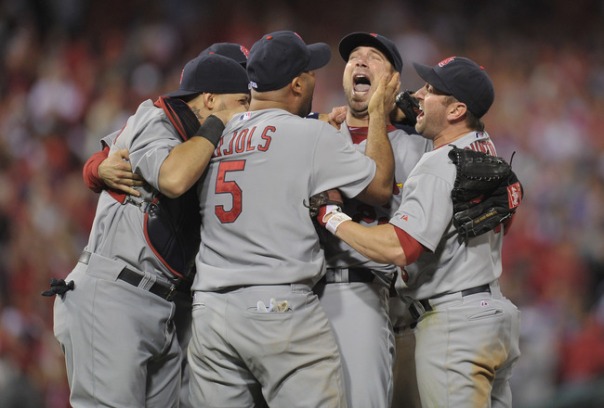 Chris Carpenter found himself on the hill for Game 5 of the 2011 NLDS against his former teammate, Roy Halladay. The game proved to be a rubber match, with both pitchers only allowing 3 hits each. Carpenter, however, silenced the Philadelphia Phillies lineup and earned to 1-0 win. The Cardinals went on to play Texas in another nail-biting series that game down to the ninth inning of Game 7–also pitched by Carpenter.

Roy Halladay was majestic in that game; he pitched an absolute gem.  Other than a pair of extra base hits, Halladay gave up one other hit the entire game.  Halladay did exactly what the Phillies could expect out of their ace and pitched 9 innings of beautiful, beautiful baseball.  However, Carpenter pitched even better.  Like Halladay, Carpenter pitched a complete game.  The only difference was that Halladay gave up a run.  Carpenter didn’t allow any runs and he did this against a lineup that boasted Jimmy Rollins, Ryan Howard, Chase Utley, Shane Victorino and Hunter Pence.  It was a rubber match for the ages, and one that could only be appreciated by a true baseball fan that watched it; no writing could ever do justice in explaining the intensity that took place in every matchup of that game.  We watched the two best teams in the National League duke it out for 9 innings, with their seasons on the line, and their fates separated by just one run.  Both pitchers held their own, but Carpenter really gave the city of St. Louis something to be proud of when it mattered most. 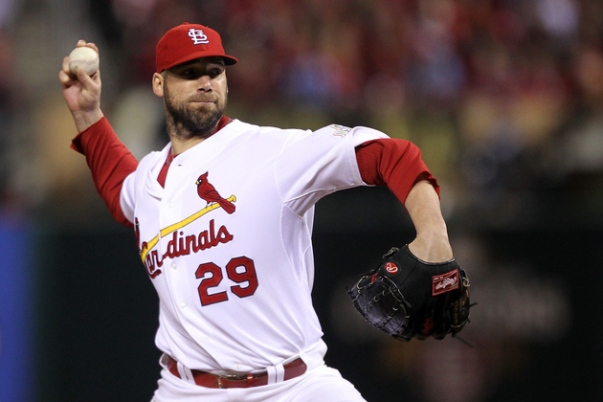 Chris Carpenter has proven himself time and time again as a Big Game pitcher. When the season is on the line and it matters most, Carpenter always reaches back and elevates his play to near-immortal levels. The Cardinals have secured two World Championships during Carpenter’s tenure in St. Louis and currently find themselves in the running for another title in 2012.

But this wasn’t a lone occasion.  Carpenter has made himself an absolute money pitcher in the playoffs and proven himself to be nothing short of the biggest, big-game pitcher in baseball.  The Cardinals went on to win the 2011 World Series against the Texas Rangers in another nail-biting 7 games series.  Chris Carpenter pitched and won game 7, which once again, came down to the 9th inning for a decision.

Carpenter is sure to find himself on the mound in another important situation in game 5 or 6 of this NLCS.  Tonight’s game was a big one for the Cardinals in Game 3 of the 2012 NLCS.  With things starting to click for the San Fransisco Giants offense, and the series currently tied at 1 game a piece, Game 3 seemed to be a must-win for the Cardinals. And they did just defeating, defeating the Giants by a score of 3-1.  The Cardinals needed to win this game at home, not only because the Giants lineup has been a threat to break out, but the Giants rotation that consists of Tim Lincecum, Madison Bumgarner and Matt Cain, has proven to be absolutely deadly to opposing lineups.  Taking the series lead while at home was imperative for the Cardinals. Regardless of when he pitches, Chris Carpenter will find himself bearing the weight of another crucial game.  Even more pressure is on Carpenter’s shoulders, because of how he has raised expectations so high with his previous postseason performances.

Regardless of how Carpenter pitches in this NLCS, he has created a legacy for himself.  Not only was he one of the most dominant pitchers in baseball for almost 10 years, but he has earned a special place in the hearts of St. Louis fans that only a postseason star can do.  It goes without saying that the games which actually count are the ones played in October (and November).  Chris Carpenter has proven time and time again that he is more than ready and capable to take the ball to the mound in the most dire of situations.

Whether or not Carpenter helps bring a World Championship back to St. Louis in 2012, he has been a major player in bringing 2 World Series trophies in the past 7 years to the fans at Busch Stadium. For that reason, Chris Carpenter will always be considered a hero to Cards fans everywhere. 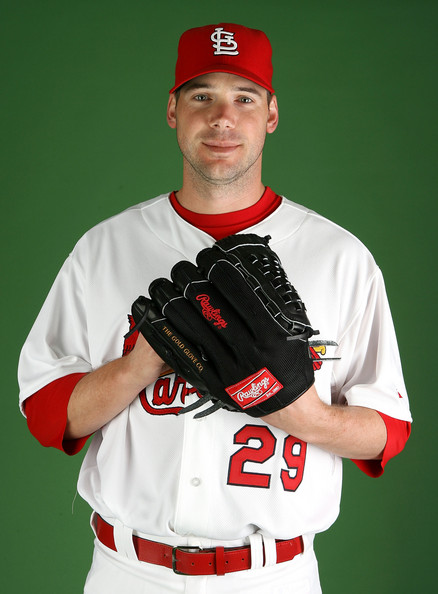 Alex Mednick is a Baseball Writer and Analyst with MLB Reports.  He has both played and followed the game extensively his entire life.  Alex grew up in New Haven, Connecticut—right in the crossroads of Red Sox Nation and The Yankee Empire.  Somehow, he dodged the bullet of joining the war between these two teams, and a love affair between the Toronto Blue Jays and Alex formed. You can follow Alex on Twitter: @MednickAlex