← The Rangers Should Sacrifice Some of Their Prospects to Win This Year
Watch Out For the Oakland A’s: Top Pitching and Countless Walk-Offs → 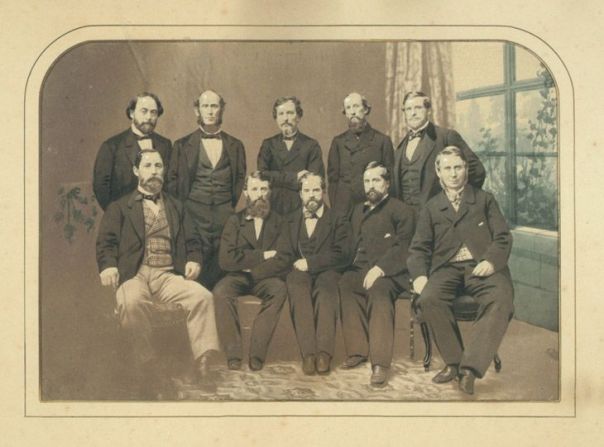 Roger Raztenberger: (Special Guest Writer)- In searching for the origins of our National Pastime, it is important to seek out and recognize the individuals who were instrumental in its formation and development rather than perpetuate the myths and half-truths of the past. Daniel Lucius “Doc” Adams is one of the “forgotten” pioneers who has been overlooked, but should be recognized and enshrined in Cooperstown.

The origins of baseball have always been a little murky and shrouded in mystery. Everyone has heard the now discredited myth of Abner Doubleday, a distinguished Civil War general, being the father of baseball. It was an interesting story that led to the establishment of the National Baseball Hall of Fame in the idyllic village of Cooperstown, NY. However, it was just a story – mere fiction. The Hall of Fame now simply states, “The Doubleday Myth has since been exposed” adding, “It’s now accepted that Alexander Cartwright developed rules in the 1840s that are the basis for the modern game.” However, the accuracy of that assessment given the lack of acknowledgement of Adams and his contributions means there’s still work to do in order to get the story right.

Alexander Cartwright and Henry Chadwick have been honored with plaques for the roles that they played during the early days of the game. Doc Adams’ contributions compare favorably with, and some would argue even surpass those of Cartwright and Chadwick. However, Adams has not yet been accorded the same honor of membership in the National Baseball Hall of Fame’s exclusive club.

Gary “Pops” O’Maxfield, Commissioner of the Friends of Vintage Base Ball (FoVBB) and co-founder (along with FoVBB President Karen O’Maxfield), is a baseball historian who has strong feelings about Adams’ place in baseball history.

“Daniel Adams is one of baseball’s true and verifiable founding fathers. As captain of the venerable New York Knickerbocker Base Ball Club, the first modern baseball team, he helped to establish the game and the rules governing the New York style of play.” New York style was one of several regional variants of Base Ball and it was the one that evolved into the game that we know today.

In terms of the game’s evolution, he describes Adams as more of an innovator and articulate rules maker. “He established the base distances at 90 feet as opposed to walking off paces. He was the world’s first shortstop, inventing the position to assist fielders in getting the light weight balls of the era back in to the infield. It totally improved defensive strategy.”

Adams helped define the rule that adds the timeless charm to the game. “He helped establish the nine inning game instead of the first team to score a number of runs to win.” As Pops waxes poetically, “The drama of a nine inning game cannot be underestimated. It makes the game perfection!”

O’Maxfield is also quick to point out that Adams supported another, fundamental rule change. “Doc Adams was an advocate of the fly game, the one rule that totally changed the Knickerbocker early game into modern baseball.”

Besides his roles as innovator, rules maker, and leader, Adams nurtured the game during critical period when it was struggling to take hold. O’Maxfield describes Adams as “an advocate, elder statesman and wise teacher; a “Nestor” of the game by teaching it and coaching it to younger players so it would survive and flourish into the future. Without his counsel and advocacy, the game may have simply died off after the original Knickerbockers retired. It was that tenuous.”

Last year, the Friends of Vintage Base Ball held a Doc Adams Day to honor this pioneer. His great-granddaughters, Marjorie Adams and Nancy Downey were both in attendance for the event and exhibited buttons from Doc’s Knickerbocker uniform and a copy of the “Nestor of Ball Players” presented to Doc when he retired from the Knickerbockers.

Adams and Downey were presented with a framed scroll honoring their great-grandfather for his contributions to the game.

To summarize the highlights of Doc Adams’ contributions to the game:

The Friends of Vintage Base Ball wants to see Adams get his due recognition to help correct a 70 year-old oversight by the Hall Of Fame. As more research comes to light, Adams credentials unquestionably warrant his inclusion in the Hall. His grandson started to educate the public as far back as 1939 and the Adams’ great-granddaughters continue to press for this horrible oversight to get rectified.

O’Maxfield puts it simply, “The FoVBB fully support this effort to set history straight and get Doc the recognition he justly deserves. It’s part of our mission to teach history.”

If you share a passion for the game of baseball, please take a few minutes to read and sign a petition to help recognize Daniel Lucius “Doc” Adams as one of the individuals instrumental in the development of the game that we know and love today. Also, help spread the word through social media, word of mouth, etc. so that we may garner as much support as possible in the short period of time before the ballot is finalized in September. Voting will occur at the 2012 Winter Meetings and any elected nominees will be inducted in July 2013.

The Friends of Vintage Base Ball promotes living history by bringing the 19th century to life through base ball events that use the rules, equipment, costumes and culture of the 1860s–1880s. They provide cultural enrichment and educational programs and activities to youth and adults that emphasize honor, team play, respectful conduct, and community pride. Its Coltsville Vintage Base Ball League plays doubleheaders most Saturdays, May through August, at the historic Hartford Base Ball Grounds at Colt Meadows in Hartford, CT.

← The Rangers Should Sacrifice Some of Their Prospects to Win This Year
Watch Out For the Oakland A’s: Top Pitching and Countless Walk-Offs →
Loading Comments...