Nate Freiman: Beane Finds Yet Another Hidden Gem… And The A’s Next 1st Baseman

All Nate Freiman did was carry the Country of Israel during the recent World Baseball Classic Qualifying Tournament. Can this First Base giant do the same in Oakland?

Baseball is a funny game sometimes. One minute you’re crying the Chris Carter blues. Then before you  know it, Nate Freiman appears. That is how Billy Beane works my friends. Just when you think he might be slipping, he pulls a magic rabbit out of his hat (better known as the waiver wire in baseball terms).

On February 11, 2013, I wrote an article outlining Billy Beane’s error in trading Chris Carter. While I have always endorsed the talents of Jed Lowrie, it was my opinion that giving up a future star in Chris Carter was too high of a price to pay.

The trade (which actually took place on February 4th) saw the Astros acquire yet another stud First Base prospect. I wondered out loud what the Astros would do with all their First Base talent (Brett Wallace, Jonathan Singleton, Nate Freiman and veteran Carlos Pena).

It seemed like too many bats and not enough positions in Houston, despite the newfound need for a Designated Hitter. A little over a month later, March 23rd to be exact- I had my answer. Nate Freiman was on his way to Oakland.

The star for Israel in this year’s World Baseball Classic qualifying tournament was going to get the opportunity of a lifetime.

While some felt the A’s were simply acquiring roster depth, I saw a different vision. The A’s had their replacement for Brandon Moss at First Base.

Billy Beane had an uncovered yet another gem that was going to thrive in Oakland. Remember Josh Reddick 2012? Meet Nate Freiman 2013.

With Daric Barton off AAA, the only thing separating Freiman from a full-time First Base job is Brandon Moss. But then again, there is always the DH position.  Freiman was a Rule 5 Draft Pick out of the Padres organization by the Astros before he was placed on waivers.  The Athletics will have to keep the big man on the active 25 Man Roster for the entire season – otherwise he will be returned San Diego.  Freiman saw his 1st action the other day in the 3rd game of the Seattle Mariners series, where he went 2 – 3 in an Oakland win.  Yesterday, he hit a Sacrifice Fly in an At-Bat off of the bench during an A’s 8 – 2 win. The club is 2 – 0 in games he had appeared in, 0- 2 without.

It’s actually quite ironic that Billy Beane has essentially traded in Chris Carter for Nate Freiman. While Carter was a highly touted prospect, traded in separate blockbuster package deals for Carlos Quentin, Dan Haren and the aforementioned Lowrie, Freiman until this year was a relatively unknown commodity in the San Diego Padres system.

Carter obliterated Minor League pitching yet could not fully establish himself at the Major League level until the 2nd half of last year. Freiman put up strong numbers in 4 Minor League seasons yet could not even get a cup of coffee, let alone a sip, in the show.

But after having nothing left to prove in the minors, Freiman would finally receive his chance this year. After being exposed by the Padres in the Rule 5 Draft, the Astros selected him. Translation? He would have to stay up with the Astros all year or be offered back to the Padres. Fortunately for Freiman and the A’s, Billy Beane did not let that happen.

Baseball is essentially a numbers game. What have you done for me lately is the calling card. With a pile of First Basemen battling for limited spots, something had to give out the Astros camp. The battle likely turned out to be between Carter and Freiman. Only one would make the team and join the Astros in the A.L. West in 2013.

Carter finished the spring with .273 AVG, 4 Home Runs, .364 OBP and .561 SLG. Throw in 15 RBI and you can see why the Astros were so excited to have Chris Carter in their Opening Day lineup, batting 3rd in fact.

For the next two games, the Astros had Carter slotted in the Cleanup Spot. But while Carter is being featured prominently in the Astros lineup, his defensive positioning has changed. For you see, the Astros had a bit of a dilemma on their hands. Carlos Pena would be slotted between DH and First Base.

It appears that Wallace is at First Base and Carter is in Left Field. This will of course depend on who ultimately hits and how adequate/poor the Astros’ defense turns out to be. But even with Freiman off the roster, the Astros will still have First Base decisions unless Chris Carter establishes himself in the Outfield.

Otherwise, the Astros may find Wallace and Matt Dominguez battling it out for the Third Base job. But if you have ever seen Wallace play the hot corner, then you will know that is unlikely to happen.

Despite going hitless to start the season, Carter’s strong spring as mentioned played a big part in cementing his position on the Houston Astros roster. Nate Freiman’s spring was not as explosive and as a result, the Astros placed him on waivers. Freiman had 1 Home Run in 54 Spring At-Bats, with a .241 AVG and .638 OPS. Despite his strong career Minor League numbers, the Astros saw enough and placed him on waivers.

On Saturday March 23rd, as I was boarding the Carnival Dream for a cruise, I received the news. Billy Beane had struck again. After agonizing for over a month how Beane could let Carter go in a trade and rely on Brandon Moss and Daric Barton to man First Base in Oakland, I got my answer.

Beane had his eye on Freiman as well and when the Astros cast him aside, Beane pounced. Now with Barton in AAA, Freiman was a Brandon Moss slump away from winning a full-time role in the Major Leagues.

Now, I’m not going to take anything away from Brandon Moss. He had a great showing in Oakland last year. But without a proven track record, I was skeptical whether he could repeat those magical numbers.

Add to the risk of not having an adequate backup and I really thought Billy Beane was losing his mind. Carter to me, was the heir to the A’s throne one day. This was the kid who was going to mash with Reddick and Yoenis Cespedes for years to come. But as quickly as one potential star leaves, another one arrives.

So is Nate Freiman the real deal? Time will tell on that front. In his Major League Debut on April 3rd, Freiman came out firing. 2 hits in 3 At-Bats with an RBI. Not too shabby. Too small of a sample size to make any judgments, but so far so good. Freiman was born December 31, 1986. Carter was born December 18, 1986. Carter stands 6’4″, while Freiman is an imposing 6’8″.

Carter may have played more total seasons in the Minors (8 compared to 4 for Freiman), but both have shown that they can hit. They can hit for average and power. Both can drive in runs. But it’s one thing to do it in the Minors. It’s quite another to make a mark in the Show.

There will be many questions that need to be answered this season and beyond to determine whether Chris Carter or Nate Freiman will be the better baseball player. They could be evenly matched, or one will pull away. But given how Billy Beane let one go and picked up the other, they will always carry a certain comparison between them in my opinion.

The Nate Freiman that I have in my mind is the one that carried Israel on his broad shoulders during the WBC. He has shown that he can hit at every level to-date. All he needed was a chance. If there is one thing that Billy Beane has proven in his management career, that he will give players he believes in that chance.

The Nate Freiman’s claim off of waivers from Houston is a classic example of a Billy Beane pickup. A behemoth man that can rake the ball out of the yard. This 6 FT 8 250 LB specimen hit 4 HRs in Team Italy’s qualifying round for the 2013 WBC.

Turning Carter into Lowrie and turning around to replace him with Freiman…now that smells of Moneyball to me. Billy Beane is nobody’s fool. He has proven that time and time again, including last year’s incredible playoff run.

The A’s already have many strong offensive weapons in place, including Cespedes, Reddick, Lowrie, Coco Crisp, Derek Norris and John Jaso. All they needed was that one more big bat at first. That could be Moss, but my money is on Freiman.

Beane is a smart gambler and likes to position himself with as much insurance as possible. Thus the Norris and Jaso combination at Catcher and the addition of Lowrie for the Infield. Its’ calling covering your bases.

Looking into my crystal ball, I see that Chris Carter will end up as the Astros’ First Baseman for years to come. He is a special talent and should help Houston in the long run. Ironically, it will be for many games against his former A’s squad.

I still wonder though how Jonathan Singleton will then fit in once he is ready…but if a team’s worst problem is too much talent, that is not a bad problem at all. From there, the million dollar question is how Freiman will fare in Oakland.

I believe that he will get his chance in due time. As long as he hits, he will find his way into the lineup. This kid has a sweet swing and I can see him fitting in quite well in the A’s lineup. I’m not ready quite yet to predict a Rookie of the Year Award in his future.

I will need to see a full-time spot for that to happen. But Freiman will hit and should be a difference maker by year’s end. Playing against the Astros in the A.L. West, he will make Houston fans cry during many games in 2013. This wise acquisition will prove yet again the mastery of Billy Beane. For in putting together a winning baseball team, in Billy Beane we trust. 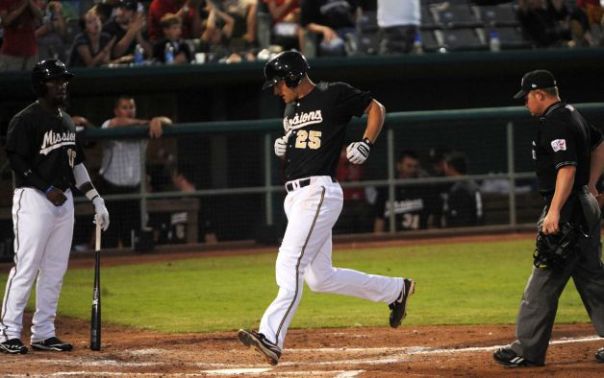