This has been the most successful run in Rangers history in the last 4 years.  2 World Series Appearances (albeit losses) – and the club has 4 straight 90+ Win Seasons.

Nolan Ryan envisioned this kind of progress when he anchored the current regime.  While he has left the nest, many of the players have been stocked up in the Minors and Majors.

The Rangers have many young players like Jurickson Profar, Leonys Martin, Martin Perez and Elvis Andrus that are entering their prime.

The greatest job done by the brass was to assemble a pitching unit of homegrown products, as this has kept the teams payroll within reason – even as some of these guys mature. END_OF_DOCUMENT_TOKEN_TO_BE_REPLACED

END_OF_DOCUMENT_TOKEN_TO_BE_REPLACED

MLB reports – Jonathan Hacohen:  Ryan Strausborger is today’s featured interview on MLB reports. A 16th round pick of the Texas Rangers in 2010, Ryan is entering his 3rd professional season. He completed last season with the Myrtle Beach Pelicans of the Carolina League (High-A ball).  What to expect from this up-and-coming baseball prospect? There are three aspects to his game: speed, getting on base and defense. Ryan stole 21 bases in 25 attempts in his first pro season and followed it up with 31 stolen bases last year. He has shown good doubles power (29 doubles in 126 games) and chipped in 9 triples. It may be difficult to replicate Rickey Henderson, but perhaps we are looking at the next Tim Raines? I’m sure Ryan will take that! He can play all three outfield positions, although center is his primary spot. For a team that plays in a well-known hitters’ park, Ryan Strausborger could be setting the table and scoring many runs for the future Rangers boppers. At 23-years of age, Ryan is still developing and working his way up to the majors. But if his two first pro seasons have shown us anything, the potential and tools are there. Get to know one of the next wave of Texas Rangers players, as we introduce you to Ryan Strausborger, outfield prospect: 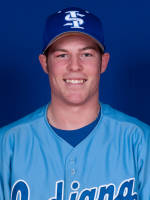 MLB reports:  First question Ryan:  Who was your favorite baseball player growing up, that you most idolized and patterned your game after?

Ryan Strausborger: Growing up I never really tried to be just like anyone, but I was always a fan of the Cubs.

Ryan Strausborger: Michael Young, just because I have been around him now a couple of times. He is obviously very good, yet he is also one of the most humble and professional guys I have ever seen.

MLB reports:  What are your goals going into the 2012 season?

Ryan Strausborger: To win the league championship and to better myself as a hitter and overall player.

MLB reports:  Did you play any other sports growing up?  Why did you choose baseball as your sport?

Ryan Strausborger: Basketball. It was my goal as soon as I started playing baseball to become a pro someday.

MLB reports:  When you first found out you were drafted, what were your reactions?  What made you decide to sign with the Rangers?

Ryan Strausborger: They drafted me out of college as a senior and gave me the chance I was looking for.

Ryan Strausborger: My speed and determination are my two most important skills.

Ryan Strausborger: Just continue to make strides to being a more consistent hitter like I did last year.

MLB reports:  How do home runs, stolen bases and walks figure into your game?  Are you a speed, power guy or both?

Ryan Strausborger: Home runs are not important, while stolen bases and walks are.  I am a speed guy with a little bit of gap to gap power and my job is to get on base and score runs.

MLB reports:  I see that you have played all three outfield positions, but mostly center.  Where do you think you will ultimately end up?

Ryan Strausborger: I would like to end up in center field. But i am a role player and would play anywhere they need me.

MLB reports:  Strausborger: Ever get razzed about the long name on the jersey?  Ever get mistaken for a certain pitcher in Washington?

Ryan Strausborger: Always get razzed about the long name, but no, Ii haven’t been mistaken for him. But people do like to make jokes about the names being so similar.

Ryan Strausborger: I need to just prove that I can be consistent and get the job done.  As for the arrival, we will just wait and see what happens.

MLB reports:  What do you do for fun away from the ballpark?

Ryan Strausborger: Just hang out with my teammates and try to take advantage of all of the very few off days we get.

MLB reports:  Have you ever been to Texas?  Is it all cowboy hats and boots?

Ryan Strausborger: Only been there for a short stay a couple of times.  No, Ii didn’t see any cowboy hats or boots on anyone.

Ryan Strausborger: Appreciate you allowing me to be featured!!

***Thank you to Ryan Strausborger for taking the time today to speak with us on MLB reports.  You can follow Ryan on Twitter (@Ryan_Straus).  Ryan is working his way up the Rangers ladder. So give him a follow, say hello and watch his baseball journey unfold!