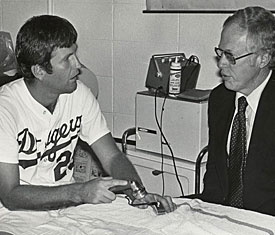 DR. FRANK JOBE, who will turn 87 in the summer of 2012, is a renowned orthopedic surgeon who revolutionized the medical care and prolonged the careers of baseball pitchers with his groundbreaking tendon transplant procedure now known as the “Tommy John” surgery.

In 1974, Dodgers pitcher TOMMY JOHN was diagnosed with a torn ligament in his left (pitching) elbow, apparently ending his career.

In an experimental surgery, which he estimated at the time as having 1% odds for a successful outcome, Jobe transplanted a tendon from John’s right forearm to his left elbow.

What is Tommy John Surgery?