But perhaps their best acquisition last winter was picking up Terry Francona as their new bench boss. 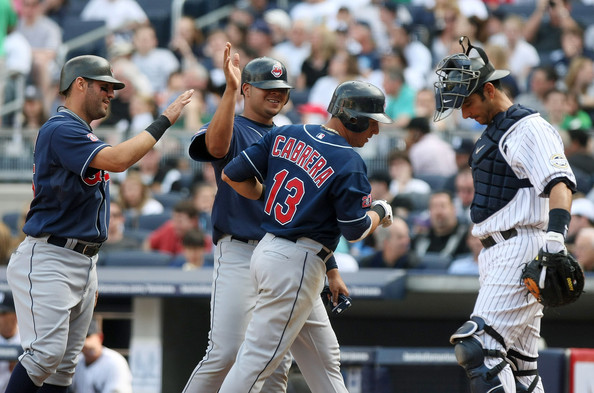 Cleveland nailed down a Wild Card Berth by winning 10 games straight to seal the deal.  While they lost to the Tampa Bay Rays in a one game showdown, it was still a fantastic campaign.

After the year ended, the baseball gods haven’t been as kind.  Kazmir inked a 2 YR deal worth $22 MIL from the A’s based on his 2013 performance, and Ubaldo Jimenez will receive a 4 Year Deal from the O’s – to a tune of $50 MIL.

This franchise couldn’t afford to bring these veterans back.  Cleveland is a mid-market team with fledgling attendance issues from year to year.

It is really a shame that the organization that pioneered the model for signing your own talent, have not been able to keep players in the fold for big durations of their career.

This team has lost CC Sabathia and Cliff Lee in recent years, while also paving the road for departures for guys like Shin-Soo Choo and Victor Martinez via trade route – because they couldn’t afford their services.

The latest player the squad will likely see moving in Justin Masterson (dealt for V-Mart) – who is in the last year of a contract, and will be one of the best Free Agent Starting Pitchers available in the 2015 market.

While the fanbase may be unhappy at the lack of movement of this years team in terms of Free Agent beef-ups, their is still room for optimism in going forward.

The club doesn’t have any money invested on their Starting Rotation, yet they feature extremely strong young talent in phenom Danny Salazar – and Corey Kluber made great strides in 2013.

Aaron Harang could also make the squad in 2014, only carrying a $1 MIL salary.

The club also recently extended Michael Brantley to a 4 YRs pact worth $25 MIL.

This team also has Asdrubal Cabrera on a walk year – doling out more than $10 MIL for his services. I highly expect the 28 year old to be dealt.

The organization has a plethora of replacement players for the position in Mike Aviles, Ryan Raburn – and Carlos Santana has been converted into Utility Infielder – that could  keep playing some 3B/1B/C and DH this year as well.

When you add Lonnie Chisenhal into the mix, and the team has options should they try and trade their 2 time ALL- Star Starting Shortstop.

Cleveland may keep Cabrera for a part of the year, but if they are not in solid contention, you can’t sit on the asset.  It could be the case for Masterson too.

Both of these players could be used in a blockbuster trade tor younger reinforcement netted back in return.

With Masterson probably being in the low teens for Millions in his deal this year for Arbitration, the Indians are in the $80 MIL range for team payroll this season.

Even with the National TV dollars coming in, it will be tough justifying any big salary bumps when you did not draw 20K fans per game during last year’s playoff campaign.

The good news is that this team could rebuild very quickly – with only $59 -$61 MIL on the books for next season.

Chris Antonetti and Mark Shapiro may be able to re-sign Masterson based on this total, or at least maybe sign 1 or 2 players in his place.

The club does have about ten guys that are Arbitration Eligible, however they should be actively pursuing a way to sign some other core guys like they have with Michael Brantley,  Jason Kipnis  6 Years/$52 MIL with a Team Option for 2020) – much in the same fashion they also did with Yan Gomes (6 YRs/$23 MIL with Team Options of 2020 and 2021 for $9 and $11 MIL respectively.

They could try to sign pitchers Bauer, Kluber, and Salazar long term to mesh with the rest of the youngsters signed – albeit risking money on pitching is way trickier.

For a Full 3 year Salary Outlook plus last years Stats for every player in the Indians Organization year round click here. 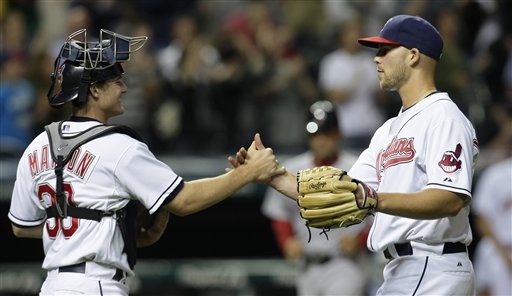 Justin Masterson was 14 – 10, with a 3.45 ERA last year. He also authored an AL leading 3 Shutouts – and anchored a much improved Starting Staff. With losing veterans Kazmir and Jimenez from the 2013 team, All 5  Starting Pitchers are now under the age of 30.  If Masterson puts forth another great year in 2014 – he will be among the best Starting Pitchers on the open market in 2015.  Will the Indians be able to extend him long term, but more importantly, will they trade the 28 Year Old in 2014 – and particularly if they fade from contention by the middle of summer?  This year he hasn’t enjoyed as much success, carrying a record of 1 – 1 , with a respectable 4.01 ERA in 7 Game Starts and 42.2 IP so far. 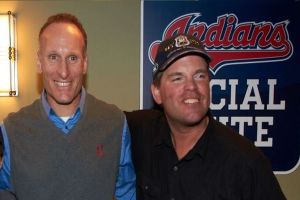 Chuck Booth was visited by the Indians President Mark Shapiro during his trip to Progressive Field in 2012 as part of his World Record Streak.