← Who Owned Baseball Yesterday (August.12th) – Updated Yearly ‘WOB’ Standings
How All Of The Rockies Pitchers Were Acquired →

A Look Back At Ken Griffey Jr.’s Time As A Mariner 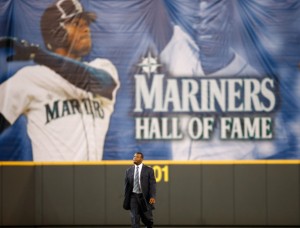 Former Mariners great, Ken Griffey Jr. walks in from center field as he is introduced during a ceremony inducting him into the Seattle Mariners Hall of Fame prior to the game against the Brewers at Safeco Field on August 10, 2013 in Seattle.

Ken Griffey Jr. is without a doubt the greatest player in the history of the Seattle Mariners. From his breathtaking defense in center field, to the 417 home runs he hit with the franchise,

“The Kid”  truly was a five-tool talent and one of the most electrifying players in the game. While his career might not have ended perfectly, Mariners fans will never forget what he did to help bring playoff baseball to Seattle.

In honor of Griffey being just the seventh player inducted into the Mariners Hall of Fame on Saturday, here’s a look back at Griffey’s thirteen seasons in Seattle. 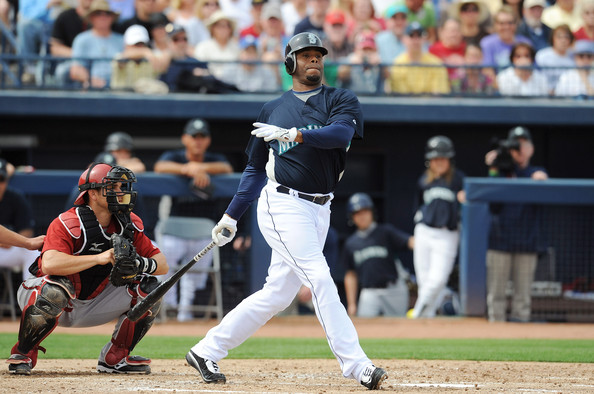 Right in the middle of the whole McGwire and Sosa HR chase on a yearly basis, there was Ken Griffey Jr. doing it the right way, compiling 209 HRs and 567 RBI over this 4 year stretch from 1996 – 1999.   “The Kid” racked up another 4 gold gloves to make 9 by the age of 29. At 398 HRs before turning 30, Griffey signed a 9 year/90 million dollar contract with the Cincinnati Reds.  For the time frame of 1996 – 1999, he was by far the best all-around player. Only a beefed up Barry Bonds would usurp him for the role of best player for the next 5 years after 1999.  The Mariners had carried 15 Losing Seasons in a row prior to Griffey turning the team into a perennial contender.

Ken Griffey Jr.’s first season in the Majors came in 1989, when he was just 19 years old. After Junior’s promising rookie season, Ken Griffey Sr., age 40 at the time, was traded to the Mariners.

The father-son duo lasted only one more season after that, but it provided a look into their relationship and people were starting to gain interest in the young phenom from Seattle.

In 1991, Junior led the Mariners to their first season over .500 in franchise history. Not too long after that, Griffey had taken the main stage in all of baseball, starring in the 1995 ALCS. 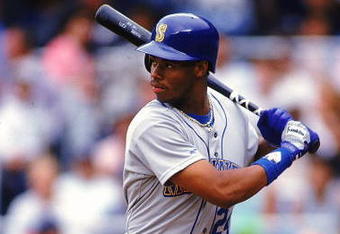 Griffey was well on his way to the all-time career HR record before injuries slowed him down after leaving Seattle  The 1995 run by the team to the ALCS (1st playoff berth for the team) saved the franchise from a potential move, because the club was so popular, Safeco Field was later built after initially being turned down in a public vote.  The Washington State Legislature found a different way to use public money to build it after the 1995 season. Who knows where the club would have wound up if not for 1995.

Perhaps his most memorable moment was when he scored from first base in the ’95 ALCS in the 11th inning to beat the Yankees.

Before leaving for Cincinnati prior to the 2000 season, Griffey was the most exciting player in baseball. From 1989 to 1999, he was also nominated to ten All-Star games (three of which he won the Home Run Derby).

During that decade, he won ten Gold Gloves, one MVP award, eight Silver Sluggers, and led the AL in home runs four times, but most importantly, he made the Mariners relevant on a national scale.

The fact that Griffey has never been tied to any Steroid allegations just everything a little sweeter.

Ken Griffey Jr. continued playing in the Majors until midway through the 2010 season, making him the last player from the All-Century team.

While he also played with Cincinnati and Chicago, before returning to the Mariners and eventually retiring, the majority of his best play came in Seattle.  Griffey is still in 6th place ALL – Time on the HR list with 630.

Currently, Ken Griffey Jr. is serving the job that the Mariners offered him in 2011, a special consultant.

Ken Griffey Jr. will always be a Seattle icon and it’s fair to say he has become the most likable hitter from the Steroids Era.

The mand is destined for the Hall of Fame and I would be surprised if he didn’t elect to go in as a Mariner. Ken Griffey Jr. will always be a legend in the Seattle area and across the nation as he served as a role model to many –  and a superhero to others.

(L-R) MLB commissioner Bud Selig presents the Commissioner?s Historic Achievement Award to Ken Griffey Jr. prior to Game Four of the MLB World Series between the St. Louis Cardinals and the Texas Rangers at Rangers Ballpark in Arlington on October 23, 2011 in Arlington, Texas.

A big thank-you goes out to our ‘Marlins and Mariners Correspondent’ Sam Evans for preparing today’s featured article. Sam is a high school student from the Seattle area.

He is a longtime Mariners fan, and has been an off-and-on season ticket holder for the last five years.

Sam enjoys interacting with readers and digging beneath the surface to find the truth in baseball.  Sam was our 2nd Intern who has graduated to the position of  Baseball Writer. For all of Sam’s archived articles- click here.

Please e-mail me  at: mlbreports@gmail.com with any questions and feedback.  To subscribe to our website and have the Daily Reports sent directly to your inbox, click here and follow the link at the top of our homepage.

← Who Owned Baseball Yesterday (August.12th) – Updated Yearly ‘WOB’ Standings
How All Of The Rockies Pitchers Were Acquired →