Time is Ticking for the Toddfather: Todd Helton Approaching Retirement

Bryan Sheehan (MLB reports Intern Candidate):  At age 38, it’s a wonder how Rockies’ first baseman Todd Helton is still going. His .302 batting average and 70 RBIs in 2011 are impressive considering his age, not to mention his .997 fielding percentage being second best in the league. On the other hand, his .466 slugging percentage and 14 home runs leave more to be desired from the once ferocious hitter. After the recent retirements of Pat Burrell and Jorge Posada, the question must be asked: How much does Helton have left in the tank? Helton, who was drafted number eight overall in the 1995 draft (which now boasts only three active players – Helton, Roy Halladay and Kerry Wood – from its first round), came into the league with a bang in 1998. In his first full MLB season, Helton hit .315 with 97 RBIs and a .530 slugging percentage. Since then he’s compiled a .323 lifetime batting average, 554 doubles (ties for 24th all time), 347 home runs and 2,363 hits.

But, like most older players, Helton has been having back troubles. To be fair, his back problems started as early as 2002, and his stats were never really affected until 2008, when he hit under .300 (.264) for the first time in his career. His stats may not tell the whole story, as he hit well in 2009 and 20011, but Helton is nearing the end.  Last February Helton claimed that he wanted to play baseball through the 2013 season, when his contract with the Rockies is up.

With Michael Cuddyer waiting in the wings, it’s unlikely that Colorado will re-sign Helton after 2013. By that time Todd will, barring a miracle, be unable to play everyday, and he’s not the type of hitter than can perform off the bench: in 47 at bats as a pinch hitter, Helton has struck out 15 times and holds a batting average of .149.  It should also be noted that other than his one hit in 2009, the Toddfather hasn’t hit safely as a pinch hitter since 1999.

As much as Helton and many longtime Rockies fans would love to see #17 play forever; it’s not going to happen. If he plays like he did in 2011, Todd will live to see another day and finish out his contract in the Mile High City. But, if he plays like he did in 2010 or his injuries get the best of him, 2012 will be the last year Helton will be wearing the purple pinstripes. From there, the Cooperstown debate will begin on Helton. Will he get in? If Larry Walker is any indication, Helton may have to wait some time until his name is called at the Hall of Fame inductions. 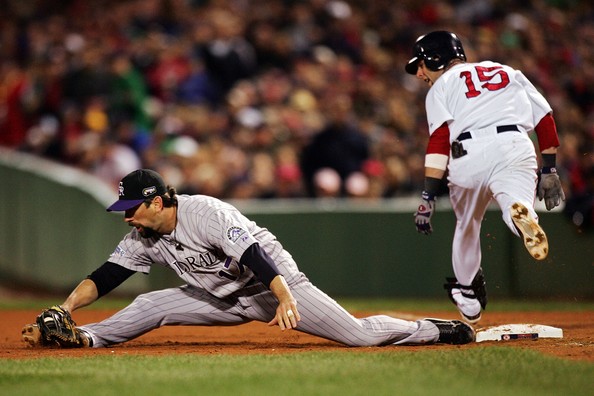 Today’s feature was prepared by our Intern Candidate, Bryan Sheehan.  You can follow Bryan on Twitter (@Sheehan99), read his interviews with Phillies’ minor league prospects at PhightingOn.com, and catch him writing the occasional article for BleacherReport.com (search his name). Tweet him about this article and he will follow you back!

← Young Phenom Pitchers May Ignite Your City
Assessing the Value of Baseball’s 5th Starter →
%d bloggers like this: