The Future of Gio Gonzalez and Mark Buehrle in the NL

Peter Stein (Fantasy Baseball Analyst – MLB reports):  Aside from their pitching style and repertoire, Mark Buehrle and Gio Gonzalez have a lot in common. They are both left-handed and have also made the shift to the National League during this 2011 offseason. However, their connection dates back even further.

The Chicago White Sox selected Gonzalez in the first round of the 2004 draft. The following season, the White Sox earned a World Championship, thanks in large part to Mark Buehrle’s regular and postseason contributions. Buehrle, a 36th round pick of the White Sox in 1999, continued to be a model of consistency and success, winning at least 10 games and throwing at least 200 innings for 11 consecutive seasons for the White Sox.  Forever a legend in the White Sox community, Buehrle joined his second major league franchise this offseason with the Miami Marlins. The move is one I saw coming when Ozzie Guillen became the manager of the Marlins. Clearly the left-hander is comfortable with Guillen, and the National League is truly where Buehrle belongs at this point of his career. He has amassed a 24-6 win loss record with a 3.32 ERA in 39 Interleague starts. However, before we look at his 2012 value, I must continue with the Buehrle-Gonzalez narrative.

Ironically for the White Sox, it was a 36th round pick and not the first round pick that became the face of the franchise. Such is baseball and is an example of what makes the game so interesting.  In fact, Gonzalez has never even pitched an inning for the White Sox. He was traded in 2005 along with Aaron Rowand to the Phillies for Jim Thome. Remarkably, The White Sox reacquired him along with Gavin Floyd for Freddy Garcia in December 2006 and still never got him into a major league game while a part of their organization.

flourished that year, winning 17 games.  Going into that season, there did not appear to be room for Gonzalez in the White Sox rotation. Particularly with Buehrle in place and Floyd/Danks set to emerge (as they did), the White Sox felt that it did not make sense to try to add a third left-hander to the starting staff. Obviously high on the team’s radar, the White Sox had to make a tough decision and trade Gonzalez…again. In a regrettable move, Kenny Williams sent Gonzalez, Ryan Sweeney, and Fautino De Los Santos to the Oakland Athletics for one miserable season of Nick Swisher. As a member of the A’s, Gonzalez came into his own, finishing 2011 with a 16-12 record and a 3.12 ERA with 197 K’s in 202 innings.

Now- going into 2012, both Gonzalez and Buehrle land in the National League for the next stage of their respective careers.

Looking at Gonzalez, his value remains high in 2012. Although he leaves the friendly pitching confines of Oakland, he is going to another pitching friendly park in Washington. His 2011 XFIP indicates that his ERA should have been closer to 4, rather than an even 3.00. Therefore, I expect Gonzalez’s ERA to hover right in the middle of those two numbers. He has an incredible ability to miss bats, but the walk rate, which he has yet to show any improvement at any level, prevents him from being a fantasy ace. With 4 walks per 9 innings, he is prone to give up high run totals and also have trouble pitching deep into games. He does do a great job of keeping the ball on the ground. But the only way for Gonzalez to really improve upon his 2011 campaign is if he can cut down on the free passes. His control is simply not that good, but he is also a player that can be categorized as effectively wild. I simply do not see any signs of Gonzalez improving his walk rate, especially as he his mainly a fastball/curveball pitcher.

In a sharp contrast, Mark Buehrle relies on command and mastery of the strike zone to retire batters. He has really shown no signs of true decline and he will still only be 33 years of age in 2012. He is not much different that the pitcher he was in 2004. He strikes out enough batters to be effective and has a stellar career 2.05 BB rate. He strikes out about half as many batters as Gonzalez, but also walks half as many. The two pitchers do have similar groundball rates. However, the change of scenery may have a much bigger impact on Buehrle than it does for Gonzalez. As I have mentioned, the Interleague numbers speak for themselves and Buehrle is finally leaving the hitter friendly confines of U.S. Cellular Park. He will surely benefit from facing the National League lineups most nights and is in a better position to succeed in Miami in 2012.

Overall, Mark Buehrle is the guy to keep an eye on during draft day in 2012. Most people view him as an aging soft throwing left-hander with a falling stock. However, he has potential to put up above average numbers for perhaps a below average price. Now while I say to keep an eye on Buehrle, it is not to say he will outperform Gio Gonzalez. Gonzalez is clearly the better fantasy option, but he will likely come at a higher cost. This is a 26-year-old pitcher who has posted 3.23 and 3.12 ERA in his last two seasons, respectively. However, do not expect him to necessarily improve upon these numbers due to some of the luck he experienced in 2011 and his inability to improve his walk rate. He will most likely be valued as an ace in many fantasy circles, when he is truly more of a number three-type starter. Buehrle, who will be off many people’s radars, could produce as a cheap yet quality four/five type of pitcher. 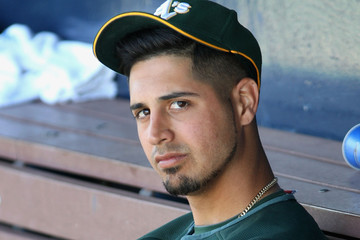 ***Today’s feature was prepared by our Fantasy Baseball Analyst, Peter Stein.  We highly encourage you to leave your comments and feedback at the bottom of the page and share in the discussion with our readers.  You can also follow Peter on Twitter (@peterWstein).***

What to do with the Red Sox Bullpen? 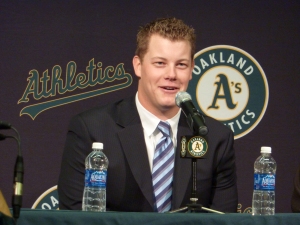 Sam Evans: The Red Sox new management has already made a lot of moves to bolster their pitching staff this offseason. The one main idea that new General Manager Ben Cherington has brought to the Sox this year is competition. The Red Sox are looking for as many players to compete not only for a rotation spot, but for a chance to be the Red Sox closer in 2012.

My first reaction to hearing that Boston wanted to move Alfredo Aceves to the rotation was very negative. Aceves is a 29 year-old reliever who throws a fastball in the low nineties. Last year, Aceves threw 114 innings and had a 2.61 ERA. Going into Spring Training, the Red Sox are going to try out Aceves in the rotation. There is no way to know whether or not this move is going to work, but it’s a risky move for sure. Nonetheless, if the Red Sox only have Aceves throw one hundred and fifty innings this season, his workload would not be dramatically increased from 2011.

This past Wednesday, the Red Sox and A’s confirmed a five player trade which sent 2009 AL Rookie of the Year Andrew Bailey to Boston. The Red Sox made it clear that they acquired Bailey to be their closer, and only that. Bailey has a lengthy injury history which is not good for a 27-year-old. He made the 2009 and 2010 All-Star teams but in 2011, he struggled due to his injuries. The Red Sox can always move Bard back to the closer spot if needbe, but for the time being it’s Bailey’s job to lose.

Daniel Bard was always waiting to take Jonathan Papelbon‘s closer role. Now, with Papelbon signing a 4- year, $50 million deal with the Phillies, one would think that Bard would slide into the back-end of the bullpen. With the Bailey acquisition, the Red Sox have made it crystal clear that Bard is heading to the rotation. In my opinion, this is not a great idea because Bard always struggled as a starter and doesn’t appear able to handle the workload. If everything goes wrong for Bard as a starter during Spring Training, he will take to becoming the Sox setup man. However, if Bard’s nasty slider can propel him to a successful spring, then he will replace the injured John Lackey and take over as Boston’s fifth starter.

The Red Sox haven’t improved much, if any at any other position other than their bullpen this offseason. I don’t like the trade that the Red Sox made, trading Jed Lowrie and Kyle Weiland for Mark Melancon. But Melancon is a nice piece to have in your bullpen. The former Yankee took advantage of Houston’s sparse bullpen last year, collecting twenty saves with a 2.78 ERA. If Bard stays in the rotation, Melancon will be the setup man. Otherwise, he will probably slide into the 7th inning role. Keep in mind that GM Ben Cherington and new manager Bobby Valentine have not ruled out the possibility that Melancon could close in 2012.

The Red Sox have other options in their bullpen, but none as strong as the previous four. Franklin Morales is a young one-time Baseball America top-ten prospect that has never had success with any breaking pitches. Bobby Jenks is due to make six million dollars in 2012, but he’s fallen off a cliff since 2009. Maybe the Sox saw the Yankees looking victorious with their big man, (C.C. Sabathia) and they took a chance on Jenks. Matt Albers, Scott Atchison, and Alex Wilson could all see time in the bullpen this year, but none pose a serious threat to take over the closer job.

Overall, the Red Sox have shown great effort this offseason to improve their bullpen. Despite losing their most valuable relief arm, the Sox have improved the quality of their bullpen across the board. The Red Sox have a big year coming in 2012, and with the recent additions to the their bullpen, it’s starting to look like they’ll be back in the playoffs once again. 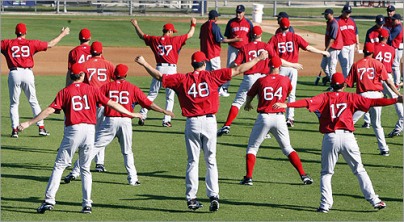 ***Today’s feature was prepared by our Baseball Writer, Sam Evans.  We highly encourage you to leave your comments and feedback at the bottom of the page and share in the discussion with our readers.  You can also follow Sam on Twitter***