← The Baseball Struggles of Tall/Heavy Players After 30: Is Prince Next?
Casey Lawrence Interview: Blue Jays Pitching Prospect (Casey’s Got Game!) →

Was the Era In Which Juan Gonzalez Played in the Reason Why He Is Off the HOF Ballot?

Sam Evans: Juan Gonzalez was the finest Texas Ranger power hitter to ever roam the outfield at Arlington Stadium. He played the game with poise and stayed humble, which made him a fan favorite in Texas. In his second year of eligibility, the 2012 Hall-of-Fame voters only gave Gonzalez 4% of the vote, which is 71% less than what is needed to be elected…and took him off the ballot. Is there any chance that this vote was affected by the Steroid Era, in which Gonzalez played in?

Juan Gonzalez grew up in an impoverished barrio in Puerto Rico.He overcame adversity as a child, and is still a role model to young Puerto Rican baseball players. He was signed by the Rangers at the tender age of 16 in 1986. He shot through the minor leagues in only two years, and soon, he was considered one of the best prospects in all of baseball. After word spread of Gonzalez’s jaw dropping power, he was named AL MVP in 1996 and 1998. He never won a World Series, but he did win one of the most thrilling Home Run Derbys ever in 1993.

Gonzalez, known more commonly amongst the Rangers fan base as “Igor”, had a 17-season Major League career that was often plagued by injuries. Igor only played more than 145 games three times in his long career. Gonzalez played for the Rangers, Tigers, Indians, and Royals from 1989 to 2005, but he’s mostly remembered for his time as a Ranger.

Juan Gonzalez was never a five-tool baseball player. The tall, buff outfielder always played shaky defense at best. Even as an offensive player, Gonzalez never offered much of an average, and he always was dragged down by a low OBP%. Igor had only 457 career walks. That’s only one-third of what Bobby Abreu has collected in his 16 years in the majors.

During the peak years of his career, Gonzalez was a key cog in the middle of the lineup contributing towards the Rangers success. If Gonzalez hadn’t been leading his team to wins, and dedicated owner George Bush wasn’t helping the Rangers get a new stadium, the Rangers probably wouldn’t still be based in Arlington.

Igor was a very lovable baseball player. He’ll be remembered for his smiling grimace after every big swing he took. He would shift his weight from foot to foot before every pitch, just daring the pitcher to throw him what he wanted. Then, when he swung, the ball exploded off his bat. He’d finish with the bat in one hand, and nobody had any doubt that the ball was going to leave the ballpark.

As much as it is looked down upon nowadays, Gonzalez was known for his gaudy RBI numbers. He drove in 100 runs eight times in his career.Now that we have learned that RBI is not an accurate statistic when measuring a player’s value, Gonzalez numbers just don’t look the same.

Gonzalez is simply not a Hall-of-Fame caliber player. Despite having ten years where he hit roughly .300 and over thirty dingers a year, Gonzalez wasn’t as great in other facets of the game. He was only worth 38.6 Wins Above Replacement during his career, which is less than Mike Cameron‘s total from 2000-2010. WAR is not always a great statistic for tracking defensive value, but almost all other defensive statistics show that Gonzalez was a below-average fielder.

With Juan Gonzalez not receiving enough votes to continue on his Hall-of-Fame quest, one has to wonder if it was because of steroid suspicion from the voters. It is completely unfair to judge whether or not a player took steroids based on their physical appearance. Sure, Albert Pujols looks like a freak of nature. However, maybe it is just in his genes, or maybe he works harder than anyone else during the offseason.

Unfortunately, the chances are that Gonzalez probably took steroids at one time or another during his career. Jose Canseco says that he gave Gonzalez steroids, and Gonzalez was also featured in the infamous Mitchell report. Unlike most players who have been claimed to have taken steroids, Gonzalez has had his trainer back him by saying that the drugs that the Mitchell report discussed Gonzalez taking, were actually painkiller and flu medicine.

Steroids were not illegal during the 1990’s. People get so worked up about how baseball players who took steroids should be erased from the record books and forgotten forever. The fact of the matter is, steroids were a part of the game during that era. It’s impossible to tell who took them and who stayed away. So why don’t we just appreciate the great ballplayers we witnessed during that time and leave it at that?

Let’s assume that Juan Gonzalez took steroids every year of his career. Assisted by these steroids, Juan Gonzalez helped save the Rangers franchise, while he also gave more back to his hometown of Vega Baja, Puerto Rico, than most of us can even dream of. Not to mention, steroids weren’t illegal and about a third of the players were probably taking them at the time at least. Even if Juan Gonzalez used steroids, he not only to become a better baseball player, but he also narrowed the gap between Puerto Ricans and Americans playing baseball. Now, Puerto Ricans see Major League Baseball as an opportunity to make money and improve the quality of their lives, as well as those of their families.

I’m not saying that Gonzalez knowingly ever took steroids. Even though it seemed as if he was always injured, and steroids were especially popular amongst players rehabilitating from injuries, there wasn’t a clear line between steroids and painkillers back then. Igor has repeatedly denied knowingly taking steroids, and I am starting to believe him.

Juan Gonzalez is not a Hall-of-Famer, so I am not surprised he got left off the ballot. The numbers aren’t completely there and the reality is that he doesn’t measure up well against Mark McGwire and the other actual and perceived steroid users trying to be elected. I just hope that in the future, baseball voters will look past the era in which a player competed in, and look more at how each player played during their era and the effect that they had on the game of baseball as a whole. 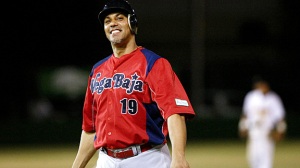 ***Today’s feature was prepared by our Baseball Writer, Sam Evans.  We highly encourage you to leave your comments and feedback at the bottom of the page and share in the discussion with our readers.  You can also follow Sam on Twitter***

Posted on January 16, 2012, in The Rest: Everything Baseball. Bookmark the permalink. 1 Comment.