MLB reports:  Major League Baseball commenced human growth hormone (“HGH”) testing in the minor leagues in the summer of 2010.  It was only a matter of time before players began to get caught under the new system.  Blood testing for HGH in the minors was the first step in bringing similar tests to the major leagues one day.  With HGH testing now in place as part of the NFL’s new collective bargaining agreement, MLB cannot be far behind.  With baseball’s agreement with the union set to expire in December of this year, expect HGH testing to be a big topic on the bargaining table.  The first player to be caught in the minors using HGH and receiving a 50 game suspension is Colorado Rockies slugger, Mike Jacobs.  With the first HGH culprit found, pressure will be intense on baseball to bring similar testing all the way to the major leagues. 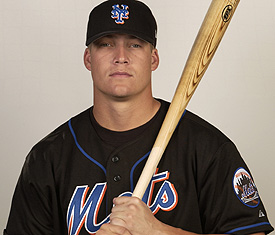 Mike Jacobs will forever be known as the first North American athlete to test positive for HGH.  Although HGH suspensions have occurred internationally, Jacobs is the first athlete in a professional North American athlete to be tested and fail a HGH test.  Things should have gone differently for Jacobs in his career.  Originally a 38th round pick for the Mets in the 1999 draft, Jacobs rose from baseball obscurity to star with the Marlins from 2006-2008.  Here is a look at Jacobs’ major league stats:

along with 93 RBIs for the Marlins.  But despite the strong power numbers, critics pointed to his .247 AVG and weak .299 OBP that year and labelled him a one-dimensional player.  The Marlins agreed and traded Jacobs in October 2008 for current closer Leo Nunez.  Jacobs originally joined the Marlins in November 2005 as a package of players for superstar Carlos Delgaldo.  Big expectations were placed on Jacobs to replace Delgaldo ever since he joined the Marlins.  While Jacobs had the strong power numbers in 2008, the team ultimately was not convinced that he would ever fulfill his potential.  While Nunez went on to star in the Marlins bullpen, Jacobs lasted only one season in Kansas City, his last full season in the big leagues.

In 2010, Jacobs spent parts of the year playing in the Mets and Blue Jays farm systems.  He hit 21 home runs and drove in 93 in 120 games combined in AAA, with a .335 OBP and .482 SLG.  This season, Jacobs played exclusively in Colorado Springs and put up inflated numbers in the hitting friendly Pacific Coast League.  With 23 home runs in 117 games, 97 RBIs, .376 OBP and .534 SLG, there looked to be a chance for Jacobs to restart his major league career.  At 30-years of age, Jacobs was looking to have a year-end cup of coffee with the Rockies and leave a strong enough impression to perhaps have a chance in spring training 2012.  Reports had a call up imminent for Jacobs when news of the HGH positive test leaked out.  The Rockies immediately released the slugger, who is now on the MLB sidelines.

Following the Marlins acquisition of Jacobs in 2005, I expected his career to develop differently.  It was clear the power was going to be there.   It was the rest of his hitting development that I expect to follow.  To stay in the big leagues, Jacobs was going to need to learn patience and to hit lefties.  Following his 2008 campaign, I still hoped in the back of my mind that those qualities would eventually come out.  But they never in fact did.  Looking back at his magical 2008 campaign, there were red flags that Jacobs had major shortcomings as a hitter.  25 of his home runs came against right-handed pitchers.  Against lefties, Jacobs hit .218 with a .248 OBP and .429 SLG.  At best, without improvement, Jacobs was likely destined to be a platoon player for the rest of his career.  Now today, Jacobs stands as the new poster child for HGH cheating.  A scarlet letter that will be difficult, if not impossible to remove.

With Barry Bonds, Mark McGwire and Rafael Palmeiro gone from the game and the “steroid era” at an apparent end, the focus is now on HGH.  Apparently very wide-spread in the game, baseball officials are said to be taking a hard stance to remove HGH use from the game.  In suspending Jacobs, commissioner Selig indicated that baseball is on top of testing and is not hiding from the process.  I expect HGH testing to be a part of the major leagues as early as 2012.  Despite the tests and the threat of strict penalties, as Mike Jacobs has shown, athletes will continue to try to get ahead despite the risks involved.  Jacobs came clean following his positive test, admitting usage to overcome injuries and regretting his decision to use HGH.  The decision to use HGH will cost Jacobs more than 50 games.  It resulted in his dismissal from the Rockies and likely removal from major league baseball all together.  For a fringe player that was already hanging by a thread, having the HGH suspension on his resume will scare off many, if not most major league teams.

Mike Jacobs had his chances in baseball.  While many sluggers before him are lucky to get one shot at the big leagues, Jacobs had several chances.  Despite playing for three teams over six major league seasons, Mike Jacobs was never able to fulfill his vast potential.  Like many left-handed home run hitters, Jacobs could never hit well against lefties and get on base at a high enough level to compliment his power bat.  Now at 30-years of age, the legacy of Mike Jacobs will be as using HGH and failing the first North American test.  While I expected Jacobs to be fighting for home run crowns at this point in his career, he now sits outside of baseball.  A lesson to be learned for future sluggers.  It is better to play clean and keep your reputation than cheat and get caught.  Once the first failed test hits, any accomplishments in the past and future will always be tarnished.  As Palmeiro, Bonds, Sosa and McGwire can attest, poor public perceptions never seem to go away.  They just continue to linger, seemingly until the end of time.