On the Verge: Moustakas, Hosmer and Myers, Kansas City Royals 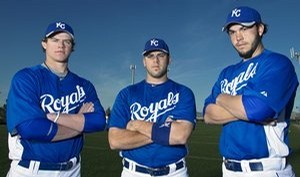 MLB reports:  The long-suffering fans of the Kansas City Royals have reason to celebrate.  Their team has played fairly steady baseball this year, sitting above .500 at 15-13.  The young bullpen has been lights out and Alex Gordon is reborn and hitting the cover off the ball with Billy Butler.  But in the hope, continued promise exists.  The Royals have one of the deepest farm systems in baseball and have been ranked number one on many experts lists.  A big reason for the top mark is the three prized hitters looking to graduate to Kansas City in the near future:  Mike Moustakas, Eric Hosmer and Wil Myers.  With so much fanfare and excitement surrounding these top prospects, who are receiving press through MLB circles, let’s take a look at how each player has fared thus far this year: starting with the top prospect, Mike Moustakas.

2011 has not been kind thus far to the third baseman of the future for the Royals.  Moustakas has been walking at a decent clip but striking out far too much for AAA.  His .227 average, to go along with four home runs says that the power is there, but the strike-zone discipline is still developing.  After miscalculating on Alex Gordon, the Royals are by no means in a rush to promote Moustakas to the majors.  Likely to finish below .500 on the season, the Royals are prepared to give Moustakas a full season at AAA with a possible September call-up depending on his progress.  The talent is off the charts and we are looking at a possible forty home run caliber hitter in the future.  But at 22 years old, the former #2 overall pick has time on his side.  Based on his free swinging ways, Moustakas actually ranks third on my list of top Royals prospects.  But he has the most potential for power and with the admiration for the long ball, we will see Moustakas arrive to great fanfare once he gets the call in the next year or so.

At 21 years of age, Hosmer is a year younger than Moustakas but playing at the same level in Omaha.  Hosmer has been the strongest out of the game for the Royals and making the push for an early season call.  With a 16/14 BB/K ratio, 1.049 OPS and .322 Average, the Royals will not be able to keep this future star in the minors for long.  Kila Ka’aihue has not hit much going into May and is looking to wind down his Royals career.  Kila is long considered a AAAA player, too good for AAA but never able to adjust to the majors.  Hosmer is blessed with the same strong batting eye and sweet swing, but will make a stronger impression once he joins the Royals.  The only knock on Hosmer is the two home runs thus far.  But when he is hitting the ball otherwise at the rate that he is, the Royals will be patient in waiting for the power to develop.  A mirror image of Logan Morrison in Florida, Eric Hosmer is my pick for the top Royals prospect, most likely to make the majors this year from this list and a future all-star and batting champion in the making.

The youngest player on this list, Myers is playing in AA at the tender age of 20.  Considering his age, the numbers thus far have been decent.  A .261 average combined with two home runs for a teenager can be considered promising.  His 3/12 BB/K ratio and .735 OPS suggests that he remains a work in progress.  A converted catcher, the Royals moved to Myers to the outfield to allow his developing bat a chance to make it to the majors soon.  The Bryce Harper express route as I call it.  Myers, while not quite in the Harper mold, is as solid as they come.  With time, Myers will challenge Moustakas and Hosmer for top spot on the Royals, as the batting eye and power are all within this kid.  He will require time for seasoning and a year or two at AA is not out of the question.  I do not expect the Royals to rush him, as 2013-2014 is the expected time frame for the top Royals prospects to reach the show and play together.  I was hoping for bigger things from Myers this year, but it is early and there is still a lot of baseball to be played.  The key with prospects is to be patient and give them time.  By season’s end, the good ones usually end up rising to the top.

By 2014-2015, imagine a Royals lineup with Butler, Gordon, Moustakas, Hosmer and Myers.  Kansas City is clearly on the rise and building their team in the right mold.  The road to respectability has been a long and painful one for this one perennial successful franchise.  But strong drafts and development has led to a farm that is producing top prospects at a rapid rate.  While Hosmer is likely the first to make the leap, Moustakas and Myers will get there in their own time.  The Royals have decided to manage their farm system in the right manner and not rush and burn out their future stars.  The fans of Kansas City are grateful, as the promised land lies up ahead.

Comments Off on On the Verge: Moustakas, Hosmer and Myers, Kansas City Royals